IN THE EARLY 1980s, the Victorian RTA (now VicRoads) put yellow concrete bricks along tram trackS to stop cars from delaying trams. They were dangerous. Tripping pedestrians, unseating riders and coming loose in traffic. The RTA later used a plastic version which was almost as bad.

The long campaign against the bricks included demonstrating on TV how the bricks came loose. I was charged with interfering with a traffic control device. The cops raided Channel 9 for the footage of me interfering with the bricks. I appeared in the Melbourne Magistrates Court. The prosecution failed miserably.

So the MRA took the RTA to court on behalf of Victorian motorcyclists. We lost on a technicality. There were no class actions in those days so the MRA did not have ”standing”, BUT, we proved the bricks were dangerous.
If a person was injured in a crash involving yellow bricks they might win a case for damages against road authorities. Councils across the State pulled the bricks out or stopped replacing them. The RTA did likewise.
The case, though lost, had a big effect. It was positive for the motorcycle community. The high-profile case contributed to many gains for riders over the next 15 years. The RTA policy against rider training was defeated and Honda introduced HART. We got free unlimited footpath parking. Riders were exempt from road tolls. We got an agreement to keep compulsory third party insurance below that for cars. We wrote the terms of reference for the Parliamentary Inquiry into motorcycle safety in the early 1990s. The Motorcycle Safety Forum was established. It would become VMAC then MAG then MEAP.
There was more but it was whittled away by quislings who thought motorcycling had outgrown confrontation. Confronting people who mean you harm is the right thing to do.
In 2017 transport/infrastructure bureaucrats have been locked up for 6 years each for taking bribes. Between 2015 and 2020 VicRoads will spend $4 billion on wire rope barrier. Someone is making a lot of money.
We know WRB is dangerous for ALL road users. We need another court case. The quislings who say fighting WRB is a lost cause or they wouldn’t use it if it was dangerous or it’s safe for the majority are wrong.
They told us leaded petrol was good because it made engines run smooth. People selling lead made heaps. When the damage lead did to young brains was discovered the salesmen tried to discredit the science. Cigarettes were good. Plastic bags were good. Asbestos was good. Even air bags in cars were there to save you not kill you. These things and more were promoted by people making money out of them until the shit hit the very public fan.
WRB is not good. We need a court case.
Damien
IRG 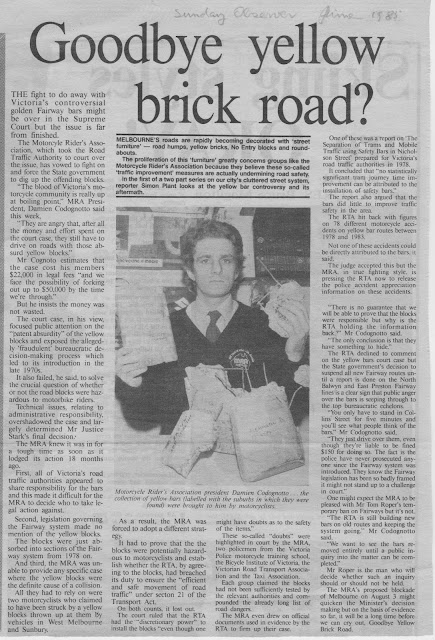 Posted by DAMIEN CODOGNOTTO OAM at 17:35