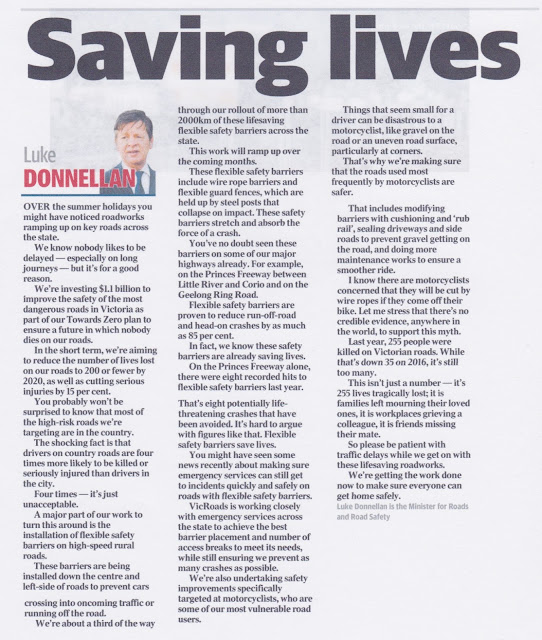 MINISTER FOR ROADS & ROAD SAFETY
Oh dear Luke.
What a disappointment to see you put out a story like the one attached.
Either VicRoads is using you as a ventriloquist doll or this is electioneering.
According to this, your government is committed to spending $1.1 billion of our money. You are committed to rolling out 2000 kms of these deadly fences (wire rope barrier). All this while country roads are dangerously neglected.
“Flexible safety barriers (WRB) are proven to reduce run-off-road and head-on crashes by as much as 85%.”
How proven? Who did the study(ies). Who paid for it/them? What was the methodology? Can we have our independent expert look at them?
What an extraordinary statistic!
“On the Princes Freeway alone there were eight recorded hits to flexible safety barriers (WRB) last year. That’s eight potentially life threatening crashes that have been avoided.”
Based on what? VicRoads WRB repairs diary? The damaged WRB that takes weeks, sometimes months, to fix. How do they/you know that these repairs were from “potentially life threatening crashes”?
Have you seen any comparisons from the number of dents on w-beam and marks on concrete barriers? How do you know those barriers did not perform better when hit than WRB did in these, or other, “recorded hits” ?
While w-beam and concrete barriers can still offer some safety to road users after damage from a hit, WRB does not. Damaged WRB is more dangerous to road users than no barrier at all. The whole structure is weakened with each post flattened.
As for the VicRoads spin doctors myth about motorcyclists being afraid “that they will be cut by wire ropes if they come off their bike(s). Let me stress that there is no credible evidence, anywhere in the world, to support this myth.”
There is no credible evidence for two reasons:
1. Road authorities do not collect evidence on barrier types involved in road crashes in Victorian conditions. The very first recommendation of the 2012 Victorian Parliamentary Inquiry was to establish a road crash data authority independent of road authorities. VicRoads wrote a lot of the “whole of government response “ to that recommendation. Why make such recommendation? Because our road safety data is inadequate and unreliable.
2. The definition of credible cuts out any evidence VicRoads deems not to be credible. We road users only get to hear what VicRoads wants us to hear you say.
As for the “chess cutter" myth about wire ropes. Most motorcycle & scooter riders know that it’s the posts in the wire rope barrier fence that mains and kills.
VicRoads knows the hazard too. That’s why they pad the WRB posts. VicRoads also knows that the WRB pads at highway speeds and lower, are like hitting a small tree …. except there’s dozens of them lined up to end your life. The pads are VicRoads admission of the danger they create for two-wheel road users with every metre of WRB they install.
To voters Minister, it looks like you do not run VicRoads, they run you.
Given the hideously expensive WRB roll out, with all the ongoing costs and the deadly condition of way too many country roads and recent fatal crashes on the Calder Highway Minister, I reckon you go to the 2018 Victorian election with blood on your hands.
Damien Codognotto OAM
Independent Riders Group
Melbourne
Mobile 0419 846 855

Posted by DAMIEN CODOGNOTTO OAM at 22:11