Darryl Wells of Werribee in Victoria campaigned to put wire rope barriers on the Princes Highway and the Maltby Bypass near Melbourne. With 40 years of road rescues to his credit, he is credible even if his letter sounds a bit like an ad for one of the three manufacturers supplying road builders with WRB in Australia.

Is it reasonable to say a reduction of call-outs on a single location, the Melbourne/Geelong road, indicates WRB is responsible for safer roads across the country? And WRB is not the only change on that stretch of highway over the last 20 years. There have been extensive road works improving the road. There have been reductions in speed limits and increased enforcement. There have been improvements in driver training and vehicle technologies. Street lighting has improved. Even the weather was dry a lot of the time during the drought. So saying call-outs to crashes "have been reduced dramatically since the installation of the fences" does not convince me that  WRB prevented any crashes.

That crashes are not as horrific as in the past may have less to do with WRB and more to do with lower speeds on that road and technologies such as better brakes, crumple zones and air bags in more cars.

It is documented fact that people, including motorcyclists, car and heavy vehicle drivers have died and been horribly injured at WRB sites. These facts have been documented by the media rather than our road authorities. That crash site data collection is sadly lacking has been raised in state and federal parliaments and  at Victorian Parliamentary inquiries.

The Victoria Police data collection system does not exactly locate a crash site in the old-fashioned tick-the-box form that is still used too often. These reports rarely mention the type of roadside object involved in a crash so when a road authority official tells you that there is no evidence to suggest WRB is any more dangerous than anything else out there he or she is right. They don't collect that information so you can't ask a computer for information about the number of casualty crashes involving WRB (or steel or concrete) and what kind of injuries resulted because that information isn't there.

Have a look at some of the input to the current Victorian Parliamentary inquiry into motorcycle & scooter safety. In particular have a look at the 2012 TAC input on crash data. The link is below. 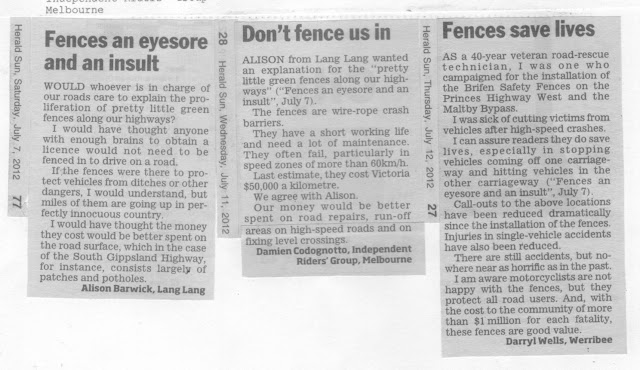 DAMIEN  Codognotto,  from  the  Independent  Riders' Group, quotes all
sorts  of  dreadful stats about wire rope barriers, including cost and
life span ("Don't fence us in", July 11).

From  the  research  I've  done,  I  can't find a single casr of these
barriers being responsible for a motorcyclist's death.

I  have  been  riding  motorcycles for 50 years and would rather these
barriers than bouncing off a big tree or an armco fence.

I  have  ridden  bikes in many countries and these4 barriers are being
put in worldwide.

Surely if they are so bad this would not be the case.

Bob  Rosenthal  (July  14, 2012) can't find a single case of wire rope
barriers  being responsible for a motorcyclist's death. That's because
cause  of  death is not established until long after the crash and TIS
data on crash sites lacks vital information.

The  current  parliamentary inquiry into bike safety heard that police
do  not  have  the equipment to exactly locate a crash and the type of
roadside   object  involved  is  rarely  recorded.  Hospital  data  is
difficult  to  get.  It's  hard  to work out how many and what type of
injuries result from crashes any type fixed object on Victorian roads.

Press  photos  make it obvious that too many people have been horribly
injured and killed in crashes involving WRBs.

WRB  is  banned in Norway and some countries stopped using it probably
because it needs high maintenance and has a short working life.

The  TAC  submission  to  the  Parliamentary Inquiry into motorcycle &
scooter safety - March 7, 2012. 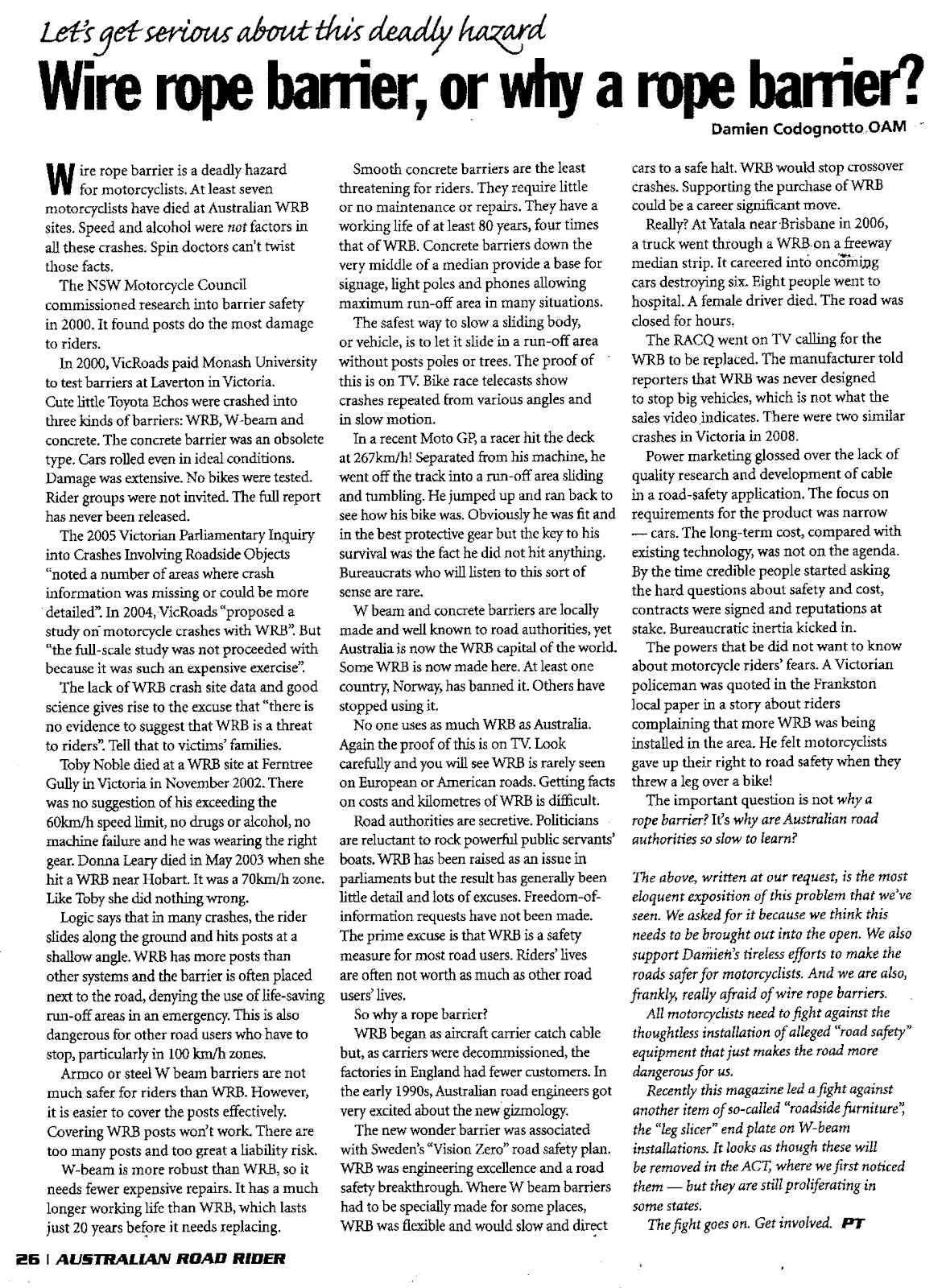 Posted by Damien Codognotto OAM at 21:42