Please read this and pass it on.

If the December 14, 2012 Herald Sun Editorial does not meet with your approval,
write a complaint.

and cc it to

We just spent a year working with the government in Victoria trying to get a FAIR GO for riders and improve our safety on our roads.

It seems that's not important to the Herald Sun. 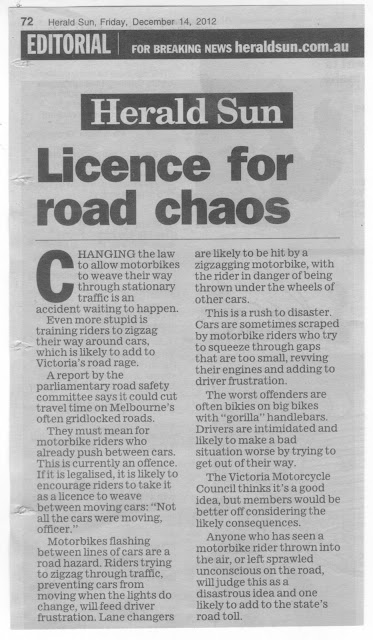 The  Editorial  in  today's  Herald Sun is biased and factually wrong.
That  would  be  bad  enough  but it directly, negatively effects road
safety  and  attacks  the  credibility  of the Victorian Parliamentary
Road Safety Committee.

Please  find  attached  the offending editorial and two letters to the
paper.

If  the Herald Sun does not fix the problem by publishing a correction
and  apology  to  its' readers for misleading them on this road safety
matter, I would like to make a formal complaint against the paper.

The  editor  of  the  Herald Sun is clearly ignorant of the facts where
motorcycles & scooters in traffic are concerned.

Obviously  one  main  contributor  to  road rage associated with traffic
filtering  is  the  paper today. In an extraordinary editorial showing
contempt   for   the  Parliamentary Road Safety Committee and apparent
prejudice  against Victoria's motorcycle and scooter riders, the paper
misleads its' mostly car-driving readership.

The  parliamentary  report is based on over a year of good science and
hearings  involving VicRoads, TAC, police and medical practitioners as
well as a wide range of stakeholders. But the editor of the Herald Sun
knows  better  than  all  of  them  blurting out a bias against riders
rather than a balanced view promoting road safety.

The  fact  is  motorcycle  &  scooter  riders are at less risk when they traffic
filter. There is no evidence from anywhere in the world that riders
crash while moving between slow moving or stationary cars on congested
roads. Crashes while traffic filtering are very rare events and likely
to be minor.

Most serious crashes are due to car driver error at intersections, when changing
lanes without looking and when bikes are hit from behind.

Riders are far safer moving to the front  of  lines  of  cars than sitting stationary
in a lane taking up most of a car space.

The  fact  is that motorcycles & scooters reduce traffic congestion by
leaving  their  cars  at home, by assisting traffic flow in peak hours and they
free up parking spaces for people who have to use their cars.

The  fact  is that there is no specific law against traffic filtering. Various  rules
about  indicating  and overtaking on the left  (a thing that  road  authorities
encourage  bicyclists to do)  give police some excuses  to  book  riders  for  a  safe,
sensible practice that eases congestion and happens every day in our cities.

In   my  opinion,  the  editor of the Herald Sun using emotive phrases
like -

"...lane changers are likely to be hit by a zigzagging motorbike, with the rider being
thrown under the wheels of other cars."

"The  worst  offenders  are  often  bikies  on big bikes with 'gorilla' handlebars."

"Anyone  who  has  seen a motorbike rider thrown into the air, or left sprawled unconscious
on the road, will judge this as a disastrous idea and one that's likely to add to the state's road toll."

- degrades the editorial to propaganda. This editorial is not evidence based, it's opinion/prejudice..
That's what the Road Safety Committee warned about. Road safety measures must be
evidence based.

I  think the editor of the Herald Sun owes the Parliamentary Road Safety Committee an apology.

A  paper  that  prides  itself  on  "...  accurate,  fair and fearless
publication of news and commentary." should not have run the editorial
"LICENCE FOR ROAD CHAOS". It was factually wrong, full of biased and
emotional  phrases  that  vilify  motorcycle  &  scooter riders and it showed
contempt for the all-party Victorian Road Safety Committee.

There  is  no  evidence  showing  traffic  filtering  is dangerous. It happens  routinely
everyday  in  our cities. There is no specific lawagainst traffic filtering. Promoting
road rage is likely to add to our state's  road  toll.  Road authorities encourage bicyclists
to traffic filter.  And,  in  40%  of bike insurance claims the rider is hit from behind
while  sitting in the lane taking up nearly as much space as a car.

Traffic  filtering  is  a  safer way for riders to travel on congested streets and it shortens
trips but it also helps traffic flow and frees up car parking space. The Road Safety Committee recommended looking at traffic  filtering  because it exists and could benefit all road users
if done safely.

Let's  hope  the Herald Sun is committed to "... the highest editorial and ethical standards."
and will "...promptly correct errors when they occur." 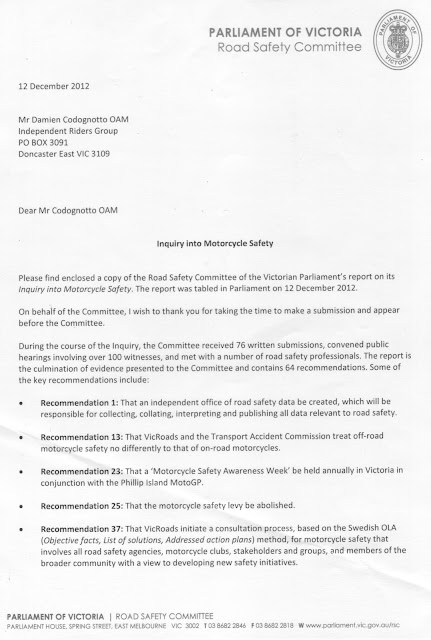 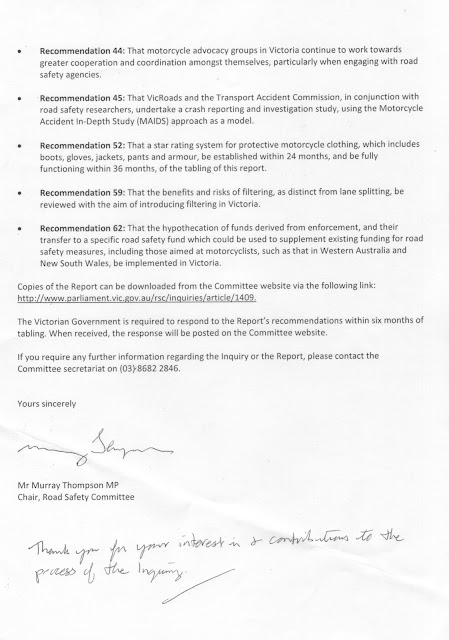 This negative editorial straight after the very positive parliamentary inquiry report indicates that we have not won a FAIR GO yet. It makes the Melbourne to Seymour FAIR GO ride more important than ever. Saturday, March 16, 2013. Put it in your diaries and on club calendars. Spread the word. Lunch after wards at the Flowerdale Hotel. Publican Steve will put on a sausage sizzle.

Your Editorial (Licence for Road Chaos - 14th Dec) is neither responsible nor evidence based. The filtering recommendation of the Vic Parliamentary Inquiry, as with many of their recommemdations, was based on the weight of evidence, experience in many European countries, and with SAFETY in mind.

In the vast majority of motorcycle accidents and fatalities involving another motor vehicle, it is the motor vehicle at fault. Filtering has been shown to be a safe practise to reduce the vulnerability of motorcyclists. Experience with congestion filtering in the UK, where it is actually promoted, with courses conducted by Police, has shown that such filtering reduces congestion by as much as 40%.

Had you taken time, as the Inquiry members did, to acsertain the facts, rather than promote road rage, you would have quickly recognised the inherent community benefits and safety features in the Committee's recommendation for filtering to enhace safe motorcycling.


Posted by Damien Codognotto OAM at 17:46