Do you remember when motorcycle riders with a pillion were not allowed
to  go  faster  than 80 kph in Victoria. Country, two-lane roads where
semis  often  did  120  kph,  were  scary. It was dangerous but no one
listened. 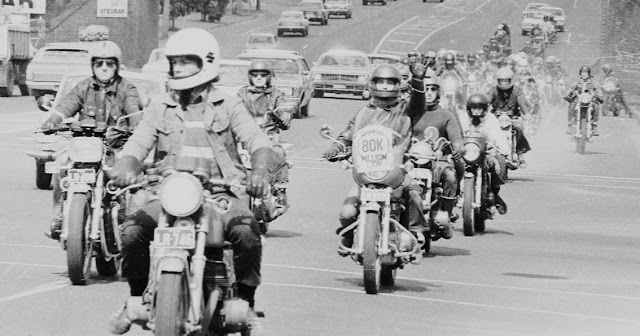 In  the  1970s there was the pillion law. And, motorcycle & scooter
learners had different speed limits  to  licenced  riders.  That meant
experienced riders could not easily  teach  novices  on-road which was a
feature of the club scene.

And,  bikes  had to have front number plates. Bikes could only park in
marked  car  bays which drivers hated. There were moves to make riders
wear  yellow  and  have  all machines painted yellow. Similar laws and
proposals existed across Australia. And there was more planned to get
motorcycles & scooters off our roads. Antibike taxes were called for and
road authorities actively opposed rider training.

In 1978 we started the Motorcycle Riders' Association (MRA) in Melbourne.
Bikers  Ltd began in Sydney that year. They were people power organisations
responding to a grass roots need. They encouraged rider involvement.

In 1980 we initiated the 10,000 BIKE RUN and   worked   with  Bikers  Ltd
and  the  Federation  of  Australian Motorcyclists  (ACT) to make it happen.
We rode on Canberra to let all governments  know  that  we  were a well-organised
voting block and we were  not  going  to  take it anymore. 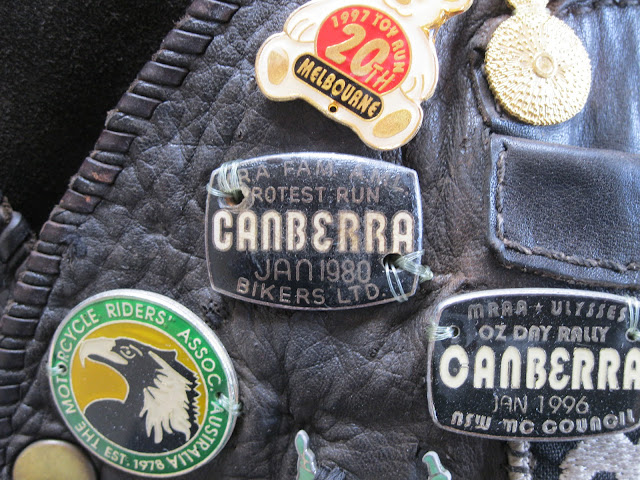 More than 12,000 bikes from all over Australia rolled into the nation's capital
demanding to be heard.

Big  runs demonstrated rider groups organising abilities and political muscle.
Thousands of riders in disciplined columns showed politicians that  we  would
would remember them at the next election and told car drivers  that we have a
right to ride.

The B&W pictures are from the second pillion law protest run. It went  from  Melbourne
to Geelong, obeying the law, riding at 80 kph in the  left  lane. Traffic that usually
travelled at over 100 kph banked up as only one lane was available to pass the
column of more than 4000 bikes stretching an estimated 10 kilometres.

One  of  the  pillions  that  day was a young back-bench MP named Jeff
Kennett.  Kennett was on Chris Swalell's Kawasaki 900. As semis roared
passed  in  the rain Kennett came to understand why the 80 kph pillion
speed  restriction  was just plain dangerous (as were the differential
limits for novice riders). He took the message back to state parliament.

The 80 kph pillion law was repealed that year.

Since around 2000 rider representation became the role of the few, not  the  many.

Rider   participation  in  public  events  dwindled.  Even  the  BLOOD
CHALLENGE  ended  after 30 years in Victoria when police withdrew with
Red  Cross  blessing.  Again  this  summer  the  blood  bank is making
desperate  appeals  for  donors  as  blood  stocks  dwindle  over  the
holidays. Call 13 14 95 if you think you can give blood.

The  Melbourne  TOY  RUN  is no longer in Melbourne.

In  2012,  400  bikes at the A'Beckett Street Protest on October 29 was considered
a  reasonable  show of strength. That event grew out of a facebook  page.  It  was  a
grass  roots  response  to discrimination against motorcycle & scooter riders.

The  PIMS  recommendations  include  abolishing the discriminatory TAC antibike tax.
This hidden TAC tax means riders pay over $70 a year on most road bikes. It was indexed by
the last government so it automatically increases every year. It is not charged on any other
vehicle. It is wrong.

We  also  need to send a clear road safety message to car drivers.

Too many of us are having our property smashed, our bodies broken and, too often,  our lives
taken because a car driver does the wrong thing. Too often  car  drivers  get  a slap on the wrist
for it, like the cup cake killer. Take a moment to think about the last rider you visited in hospital
or the last riders' funeral you attended. We are legitimate road users who pay our way and
we demand a fair go on our roads.

Riders are invited to assemble at the BP servo on the corner of Cooper Street  and Scanlon
Drive in Campbellfield - Melway map 181, reference E  11.

All welcome. The more flags and banners the better. Businesses and  organisations are welcome
to attend to show solidarity with their customers.

The  column  will depart for the marginal seat of Seymour at 10.00 am. It is about an hour's run
up the Hume to the electorate office of Cindy McLeish  MP in Wallis Street. Riders from the
north, east and west are invited to join us there. We are all in this together.

About  11.30  am speakers will tell the government, opposition and the media  what  can  be
done to win votes from Victoria's 326,000 strong motorcycle  & scooter community.
Members from both sides of parliament will be asked to speak to the assembled riders.

After the speeches riders are invited to lunch at the Flowerdale Pub - Melway  map  X927,
reference J 2. The Flowerdale is the hub of some of the best riding roads in Australia.

PLEASE  use  this  material  as  you  see fit - put it on webistes and facebook,  pin  it  on  notice  boards, email it to friends, use it in magazines  and newsletters and raise it at club meetings. Get the word out there. Watch this blog for more details.

Join  the  IRG.  It's free. You can withdraw anytime. All we need is a name, post code and email address.

Please pass this on.

Have a safe & happy new year!


Posted by Damien Codognotto OAM at 18:05