I'm not saying we don't need cops or that all cops are ignorant thugs. But when you do what I do, you get a lot of people telling you of their experiences with police when out riding their motorcycles & scooters.

Having given that due consideration over many years, I think it is better to publish the tales making it clear that they might be one point of view, or even fiction. Then I think, why cause trouble? If the cops did what was claimed, surely the riders would make a formal complaint so police behaviour would be "proper" when dealing with law-abiding motorcycle & scooter riders.

I thought the advice, particularly pushed in Queensland at the moment, that legal riders have nothing to fear, was true?

Then I meet a cop who is just plain mean and pig ignorant to boot.

Earlier this year we did a FAIR GO RUN to the office of Liberal MP Cindy McLeish in Seymour. On the highway a police car doogged the column of riders who were riding legally. The highway patrol officer followed the riders to the event. The speeches took about three quarters of an hour. Not a hint of a problem. MP Cindy got up and said her bit. We packed up to head off to the Flowerdale pub for lunch. Good spot. 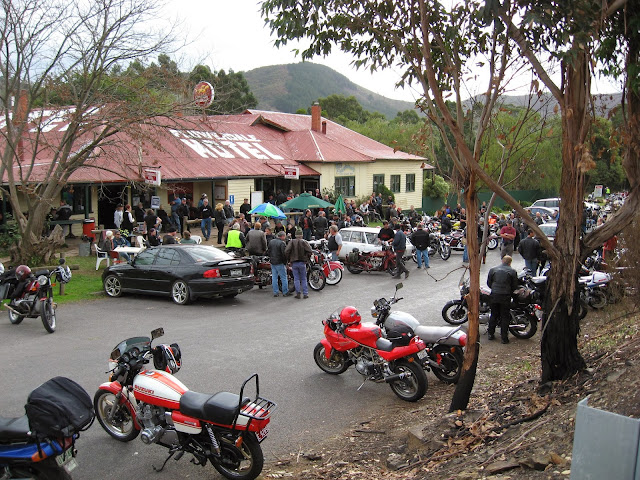 During the speeches the policeman sat in his police car and watched us obeying the law, presumably on full pay. He was not on the highway protecting the public against law breakers. As I got ready to leave he called the driver of our ute/stage over and proceeded on lecturing him on how to drive. If the ute driver had broken any laws the officer was not pointing that out or booking him. Nor was he getting out of the police car.

I wandered over and asked what the problem was, or some such. I got a lecture on organising events from this middle aged public servant who clearly could not organise good manners let alone a political rally. I took it with a grain of salt until he said. "I've been patrolling the Hume Highway for 30 years. What I say goes. It's my road."

He got all blustery and I thought he was going to try to book me for something which would have been OK with me. I don't mind a day in court. I gave him my card and told him to take it further if he thought that was warranted. He left.

Then there was the case in NSW where police set up a trap for riders. Drove a 4WD dangerously and booked a lot of people riding legally on trumped up offences. The link to that video is on this blog. Some of the riders fought the matter in court and won. Good on 'em. Have a look.

The Queensland recent insanity with antibike laws has spread to police forces interstate.

Police are bullying hoteliers/publicans telling them they could lose their licences, means of earning an honest living, if they let people from bikie organisations in their businesses. No list of banned organisations. No definitions of clothes, colours or logos. Just load the person trying to make ends meet with the responsibility for who can be his or her customer ... what?!?

Can't happen? It did. The Baxter Tavern banned logos and colours. Hopefully there will be a story on that one in the Frankston Leader in the week ending November 15, 2013. 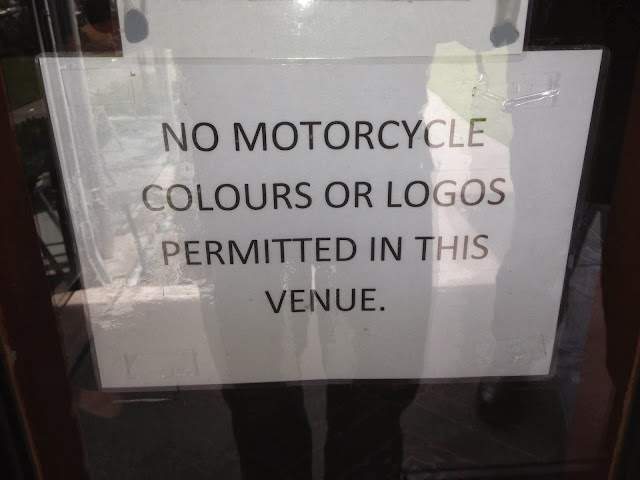 There's also a pub in Essendon that marched a young couple back into the street for have the cheek to arrive on a bike dressed appropriately. Got to find out more about that one.

Another report from a few weeks back was about a HOG group having a routine meeting at the Beaconsfield Hotel.  Legal machines and riders. Going to spend their money at a local business. Apparently none of that mattered to the highway patrol that pulled up, questioned people then left without charging anyone for anything. Those Victorian cops stopped because there were motorcycles parked there not because there was even the slightest indication of wrong doing. Don't tell me legal riders have nothing to fear from targeted anti-bikie laws and/or media campaigns.

If it had been members of a car club there would have been a stink. Maybe the Herald Sun and RACV would have expressed outrage at the heavy-handed policing. But these were only "bikies" and the chance of bikies standing up for themselves is very low in the eyes of police ... and the cops are right. Bikies rarely stand up for themselves. Apathy is one of or worst enemies.

Yesterday I got a first-hand account of another instance of highway patrol bigotry in Victoria.

An old friend of mine who has lived in China for many years, was horrified at what is happening in Australia. I put that email at the bottom. If something like this happens to you make a formal complaint or you will lose the right to complain. Eventually you'll lose the right to ride.

If you are pulled up by police take photos. Make notes as soon as they go. You may need them.

Go see you local MP with the pix & notes. Make a formal complaint.

In October 2013 at around 9:20 am I was one of 4 riders from a vintage motorcycle club travelling together from Corryong to Cooma for an annual rally.  We were on bikes, all built between 1947 and 1952 and all on club registration.

At a point around 10 Km from Corryong, we were travelling at around 85 Kph (based on my GPS log) when we were overtaken by a grey Toyota Land Cruiser, which I estimate was travelling in excess of 130 kph - as it overtook us, across double lines, our bikes were severely buffeted by its slipstream.

Once in front of the lead bike is swerved back onto the correct side of the road then braked very very hard; as a group we needed to take avoiding action else we would have collided with the back of the Land Cruiser.  It was only then that, what we thought were hoons, turned on their Red and Blue lights - it was an unmarked Police Vehicle.

We stopped and our lead rider (who just happens to be a senior riding instructor) enquired "what was the problem" as we had done nothing wrong.  The reply was breathtaking "Shut the fuck up; you and your cunt mates get off the road and pull into that fucking side road up ahead and wait for us!"

We did as instructed with the cops following.  Once in the side road we were then told  "turn the fucking engines off - this is a licence and log book check".   Without comment, we each presented our licences and log books.  The cops made a record of our licence details, our registration details and club association (as per the log book).

I also believe they photographed us covertly.

After dicking us about for nearly 40 minutes the licences and log books were returned.  No tickets and no warnings were issued; no form of apology for their actions was offered.

As the cops were getting back into their vehicle one of our number asked where they were from and was told "TOG, Brunswick St, Brunswick".

They then left, making a U turn heading back towards Corryong.

Just thought you may be interested - the poison is already spreading from Queensland!


This is breath taking and way beyond anything that ever happened when I was riding back in Oz many years ago. It's like something from Mad Max!!

In Shanghai, when a cop pulls you over, the first thing they do is salute you before they start discussing the reason why they pulled you over. Not saying things are perfect here, cause they aren't, but they always show respect for offenders.

Mind blowing isn't it. We say we're the advanced culture???

Posted by Damien Codognotto OAM at 17:09