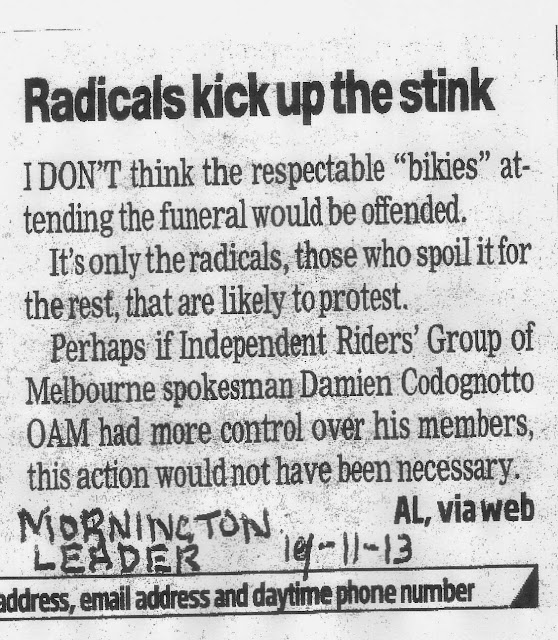 Hi ya Damien.
Bugger me days mate, just when I’m telling my self that I’m tired of being angry and I’m not going to write any more shitty letters, something like this pops up. ARRRGH!
Feel free to send this to anyone who may be interested. However I’ll let you know if it makes print next week.


Here’s to ya.............Aussie.
To Al who thinks only “radicals” would be offended at having to remove items of motorcycle clothing at a pub wake.

You are absolutely correct in stating that they spoil it for the rest. Many people like you assume  a lot in ignorance. I am an average bloke, I dare say like you, who has raised a family, worked to pay off a mortgage and I have ridden motorcycles for more than half a century.

I have never been required to remove my Motorcycle Riders Association cloth badge  anywhere. I am a member of The Independent Riders Group which is not about control.

Damien among others has worked extremely hard over many years organising kid’s charity runs and Red Cross blood runs as well as lobbying to give motorcyclists a better image. With the unfavourable press on outlaw clubs, it is very much an up hill battle.

The Baxter Tavern ban is on colours and logos. That means even company or event logos on t-shirts. The riders attending the Baxter Tavern after a funeral were not wearing outlaw club patches. My information is that they were mature riders from the Ulysses Club, a club where you have to be 40 to be a junior member and a club that has many retired and serving police as members.

Making these mourners leave valuable gear outside if they wanted to hoist a glass to their mate who had ridden on is, in my opinion, despicable bigotry.

There is more on this ban in previous blogs.