Responses  to  the October 29 protest rally in Melbourne have been
very  positive.  Four  groups will ride to the city for the rally the
day after the GP. The rally, among other things, is protesting against
recent  moves  to  force  motorcycle  &  scooter  riders  to wear high
visibility  vests, make government approved protective gear compulsory
and bring back front number plates.

Three  groups  will  ride to the city. All motorcycle & scooter riders
are invited to join them at the assembly areas or en route.

CRANBOURNE:  The  ride  will  be  led  by  Johnny  Gee  in the Antique
Motorcycles  truck - 0439 393 912.   www.antiquemotorcycle.com.au
Riders will  assemble  in the car park next to the BP service station. As you
come  through  Cranbourne  heading  for  Melbourne you pass the Centro
shopping centre on the left, then the car park, then the BP. The route
will be up the Monash Freeway. The ride departs at 11am.

CAMPBELLFIELD:  The  ride  will be led by Anthony. Contact Leah -
0433 908  545.  The  assembly  area is in the Kmart car park at 1434 Sydney
Road,  Campbellfield.  The route will be down Sydney Road past Highway
31  and Harley City to Royal Parade. There will be a short stop by the
park  to  regroup.  Thyen  on to the Haymarket roundabout, Peel Street
past  Garner's  Hire  Bikes  then left into A'beckett Street. The ride
departs the Kmart car park at 11am.


CARLTON:  This  ride  is  organised  by  the  Victorian Scooter Riders
Association and led by Greg.   www.vicscooterriders.com.au     The contact is
Steve on 0409  848 428. The assembly area is Argyle Square in Lygon Street from
11am. The ride departs at 11.40am.

HEALESVILLE:  The  ride  will  be  led  by Heather - 0425 720 193. The
assembly  area  is  at AJs Cafe - 5962 2662.  www.ajsmotocafe.com.au
335  Maroondah  Highway,  Healesville.  The  route  will  be  down the
Maroondah  Highway  through Lilydale to Springvale Road. Turn right on
Springvale then left onto the Eastern Freeway. The ride departs AJs at
10am. There will be a short stop in Lilydale opposite the Olinda Hotel
to pick up riders. 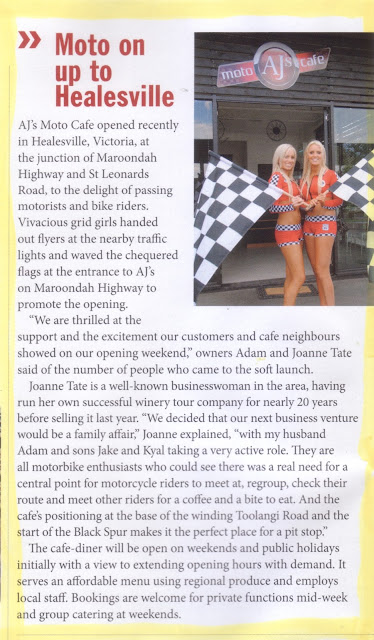 Posted by Damien Codognotto OAM at 15:29