RIDERS heading for the Moto GP on Phillip Island BEWARE!

Victoria's roads are in an unprecedented state of neglect. The main route to the Island from Melbourne via the South Gippsland and Bass Highways is particularly dangerous. On Thursday, October 18, 2012 a route survey revealed more than 50 large potholes and associated road debris between Koo Wee Rup and San Remo.

These potholes are dangerous for cars. They are death traps for motorcycle & scooter riders.

Roads across the state are in shocking condition. Transport Minister Mulder excuses himself blaming the weather. VicRoads excuses themselves blaming budget cuts. The fact remains road users are at risk. If the Minister made VicRoads spend less on roadside barriers that deny riders life-saving run off areas and overkill signage there would be enough money to repair road surfaces.

VicRoads has a duty of care to tax paying road users. Road users have a right to expect, and get, a safe  road environment.

If you are headed for the Island this weekend, please take extra care. Our roads are dangerous.

The  Independent  Riders'  Group's  Dale  Maggs was interviewed by Red
Simons  on  ABC  Radio 774. He also did interviews on 3AW News and 3YB
which covers the south west of the state. Dale raised the "Bracks tax"
too.

Since  the IRG route survey of the main route to Phillip Island on
Thursday,  October  18, and the following media exposure, VicRoads has
made an astonishing effort to patch the long-offending potholes on the
Bass Highway.

The  IRG did another route survey on Tuesday, October 24. In just five
days,  over  a weekend, VicRoads has patched the worst potholes on the
road.  The  Bass  Highway is safer than it was a week ago but it's not
pretty and not smooth and the work does not look permanent.

And  the  fact  that the work was done makes Minister Mulder's excuses
about  the  poor  condition  of too many roads across Victoria's a bit
thin. The IRG maintains that if VicRoads cut a lot of the waste in the
areas of road barriers and signage there would be a lot more money for
road surface maintenance and repairs.

It is a dedicated site for riders where  Maurice  Blackburn  experts  will  discuss directly with riders
their  rights,  entitlements  and  other support services available to them.


Please pass the message on that our roads are not safely maintained & we are on the edge of an international tourist event, the Moto-GP. Who's looking after motorcycle riders on our roads if the Government fail us? 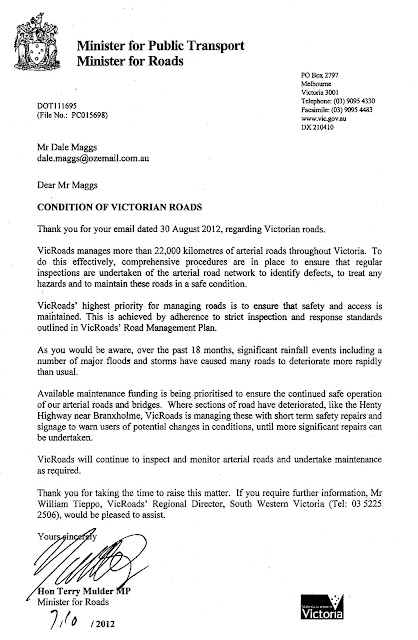 Posted by Damien Codognotto OAM at 13:46