The Victorian Government / Herald Sun did not consult motorcycle or scooter riding stakeholders when developing its' "raft of road safety options", it did ask the RACV.

The RACV began in 1903 when 3 motorcyclists organised the first run and meeting.

Today the RACV is a car organisation with a few members who ride bikes.

Nobody told Victoria's Motorcycle Advisory Group (VMAG), the expert body set up at VicRoads by the Baillieu Government to advise on such matters. Nobody consulted the Independent Riders' Group (IRG) or the Victorian Motorcycle Council (VMC). 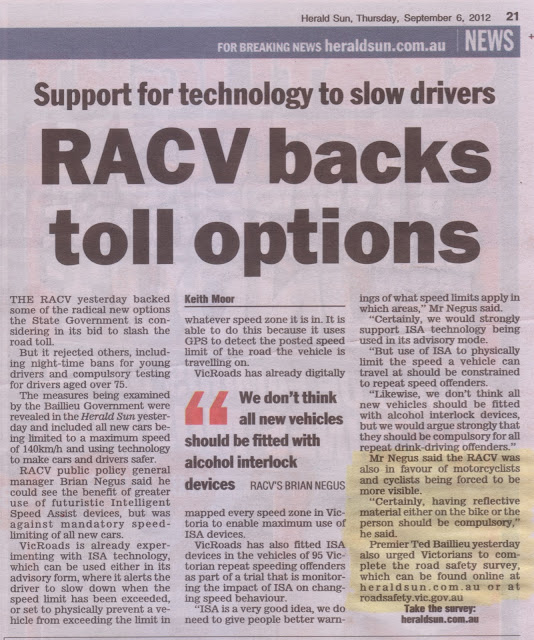 The  Herald  Sun  published  (5/9/2012)a  "raft  of options" including mandatory  high visibility vests, compulsory boots, pants, jackets and gloves   and   front  number  plates  on  bikes. Stakeholders were not consulted again.

There  is  no  evidence  hi  viz vests work. If some small road safety
benefit  over  a  bright  headlight  can  be  gained, it can be gained
through voluntary use.

Protective clothing is used by the majority and should be encourged. A protective gear law/adr will mean less choice, higher prices and a lot of  top  quality  and  tailored  bike  gear  not  being  available  in Australia.

Front  ID for motorcycles & scooters does not mean plates or stickers. Police  want  a  tracking  device regulation to fine riders and gather intelligence.  Bikes  are  not  designed to display front ID and very, very few places anywhere require it.

VMAG  was  bypassed  in  developing  this  raft  of  options. RACV was apparently  included.  The motorcycle options are revenue raisers, not effective  road  safety  initiatives. If that was not the case why not consult  VMAG and develop proposals that will really do some good? Why not   wait   for  the  current  Parliamentary  Inquiry  to  make  its' recommendations?

Posted by Damien Codognotto OAM at 17:25