Both  the  Australian  Motorcycle Trail Riders Association (AMTRA) and
the   Victorian   Scooter  Riders  Association  (VSRA)  should  be  on
Victoria's Motorcycle Advisory Group (VMAG) in their own right, as per
the  Parliamentary  Inquiry  into  motorcycle  & scooter safety (PIMS)
recommendations - December 2012.

That  VicRoads'  CEO Gary Liddle denied VSRA, and likely AMTRA, places
on  VMAG  is  wrong.  In  this case, a six-month delay is a refusal to
accept the PIMS recommendation. It demonstrates VicRoads' bias against
motorcycle  &  scooter  riders, contempt for a parliamentary committee
and a disregard for road safety except when it suits their agenda.

A road safety committee comprised of people picked by a road authority
rather  than  picked  for  their  expertise  and the stakeholders they
represent is a liability, not an asset, to road safety.

VicRoads   has  a  duty of care to all road users. VicRoads is subject
to the Victorian Parliament, not the other way round.

The  Independent  Riders'  Group  supports VSRA's and AMTRA's right to
have  representatives on VMAG in line with the PIMS recommendation. 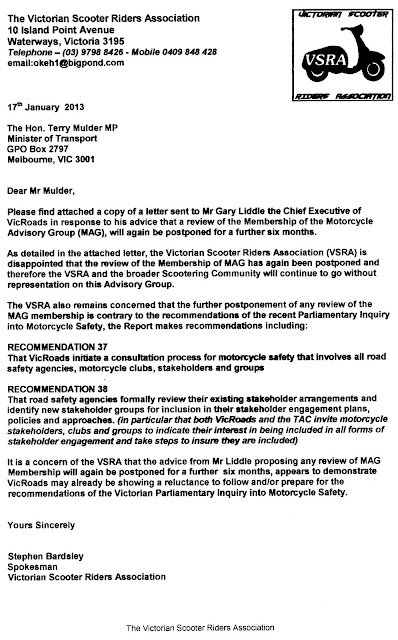 Posted by Damien Codognotto OAM at 17:46