To all Victorian Members of Parliament. 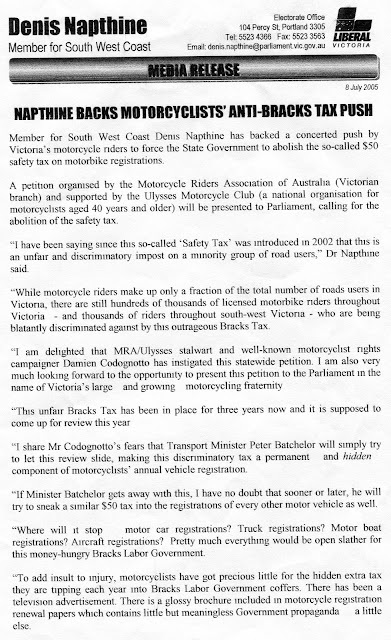 On  Tuesday,  September 3, 2013, the Shadow Minister for Roads and the
TAC, Luke Donnellan MLA,  read  a  statement  on  the Premiers' broken
promises into the record. Use the link to read the statement. 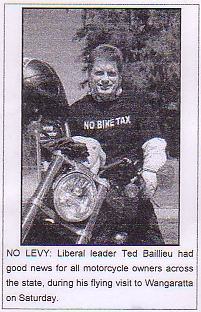 This  hidden  tax on environmentally-friendly powered two-wheelers  is
unfair and discriminatory. If you taxed 4WDs/SUVs in  similar fashion,
there would be an outcry from the car industry and the RACV. The
RACV supports the TAC tax.  After a decade the road  safety  benefit
is nil.

In fact the $70+ a  year  TAC  tax  hits low  income  earners  hardest
so  it discourages them from buying the best safety  gear  and keeping
their machines in safest condition. It is  a  road  safety  experiment
that failed and should be ended.

The  Victorian  Road  Safety  Committee's  inquiry  into  motorcycle &
scooter safety studied the TAC tax.  It  made  64  recommendations  in
December 2012. No. 25 was:

"THAT THE MOTORCYCLE SAFETY LEVY BE ABOLISHED."

There   is   absolutely   no   excuse  for keeping the TAC tax.
Or for holding the work of the RSC in such contempt.

Victoria's   325,000+ motorcycle  &  scooter licence holders and their
families won't forget the TAC tax and the Baillieu/Napthine  backflip   at  the
2014  state elections.

Take this to your local MP and demand that the inquiry recommendation to abolish
the TAC antibike tax be adopted immediately.

Write "NO MOTORCYCLE SAFETY LEVY" in blank space on your ballot paper
next Saturday. It's a federal election but it's good practice for the 2014 Victorian election.