"VICROADS employees racked up more than $525,000 damage in car accidents in just 16 months.
In the same time, leadfoot employees were fined almost $22,000 for flouting road laws at an average of once every three working days, or about six a month."
DC - Some may ask how many VicRoads/TAC/Police employees were not booked for traffic offences they commited.
"... employees made 165 insurance claims for company (VicRoads) cars between January last year and April this year.
Of the $525,261 claims bill to be paid by taxpayers, more than half was caused by employees crashing cars into other vehicles.
... In 2008, the Herald Sun found employees were committing traffic offences at the rate of 11 a month.
Employees were fined $21,976.50 for 131 traffic offences between January 2010 and April 2011.
Working Against Culpable Driving spokes woman Penny Martin yesterday said VicRoads employees hadn't learnt their lesson.
'They need to lift their game.' Ms Martin said. 'Whether they like it or not, VicRoads, the TAC and police need to set an example ..."
Personally I'm not comfortable with VicRoads having anything to do with road safety. I think VicRoads should stick to transport infrastructure. Victoria should have an independent road safety authority overseeing the all road safety matters from crash site data collection, though unbiased research to initiating safety campaigns and countermeasures.
I am even more uncomfortable with VicRoads having anything to do with motorcycle & scooter safety.
The Age - Friday, July 15, 2011.
RIDING THE ODDS
By Ian Munro
"As a state parliamentary inquiry (DC - into motorcycle & scooter safety in Victoria) uncovered almost 20 years ago, the state roads, licencing and registration authority, VicRoads, had a policy of 'not implementing any programs that could be construed as encouraging motorcycling'
Having decided that motorcycling was inherently risky, VicRoads thought it best to do nothing to make it safer in case this encouraged more people to take it up. VicRoads has formally abandoned the policy, but in the licencing system it's legacy seemingly lingers."
I think the antibike policy lingers, unofficially of course, in a lot more places than just the licencing system.
The Victorian Motorcycle Advisory Council (VMAC) became a rubber stamp for VicRoads/TAC/Police policies under the Bracks/Brumby governments. VMAC was dominated by VicRoads/TAC/Police and rider representation was weak. The Baillieu/Ryan coalition was elected in November 2010. It's published policy was to replace VMAC with a new group to give motorcycle & scooter riders better representation to government.
On November 22, 2010, just before the state election, Shadow Roads Minister, Terry Mulder, issued a media release.
"Mr Mulder said a coalition government would work to give motorcycle groups and the industry stronger representation on a newly established Motorcycle Advisory Group."
The new government requested advice from the Independent Riders' Group (IRG) on setting up the new Motorcycle Advisory Group (MAG) and recommendations on who should be on it. A discussion paper was circulated. It recommended that MAG have an independent Chair and Secretary and that meetings be held in business hours and in a central location, Melbourne Town Hall perhaps. VMAC meetings used to be held at VicRoads HQ in Kew.
MAG has an independent Chair, The Hon David Hawker. David was the Speaker of the House of Representatives in Canberra and is a motorcyclist. Meetings are held quarterly, in business hours. The first MAG meeting was on August 5, 2011.
But, MAG meetings are still at VicRoads HQ and already there have been rumours of attempts to stop MAG members speaking on MAG matters outside MAG meetings. It's road safety not national security. The more serious debate the better.
The IRG wrote to VicRoads' CEO, Gary Lidel, on July 12, asking for the last vacant seat on MAG. IRG received a reply from Acting CEO, Bruce Gidley, dated August 10. In part it said.
"The Victorian Motorcycle Advisory Council (VMAC) was wound up in March this year and has been replaced by the Motorcycle Advisory Group. The new group has been set up to provide advice to VicRoads ...
The purpose of this change is to ensure that decisions made by VicRoads and its' advice to the Government are made following consideration of relevant input from a range of stakeholders. The membership of the group has been selected by VicRoads ... I am confident that the members chosen will make a valuable contribution to our work."
It remains to be seen if MAG will be dominated by public servants who don't ride, sanitising the minutes and offering government only advice deemed suitable by VicRoads/TAC/Police. VicRoads has already decided who our representatives will be.
I said at the start I'm not comfortable with VicRoads having anything to do with road safety. I just do not believe enough VicRoads employees have their priorities right when it comes to motorcycle & scooter safety.

To have a say about departmental policies, the TAC tax or any motorcycle & scooter issue, please email rsc@parliament.vic.gov.au .
Damien Codognotto OAM
Independent Riders' Group
LISTEN to Hirsty live on RIDE from 10 pm in Qld., NSW, Vic. & Tassie. From 9.30 pm in SA, Broken Hill and the NT and from 8 pm in the West. In Sydney tune in to 90.5 FM and across Australia at http://www.2ccrfm.com/ .
Posted by Damien Codognotto OAM at 19:40 No comments:

The Baillieu/Ryan coalition beat the Bracks/Brumby Labor Government in Victoria just nine months ago. In opposition the coalition made encouraging noises for motorcycle & scooter riders. But so did Bracks in opposition a decade ago. In government though Bailieu's Roads Minister, Terry Mulder (terence.mulder@parliament.vic.gov.au), seems to have been taken in tow by VicRoads/TAC/Police where this state's 326,000 road riders are concerned. 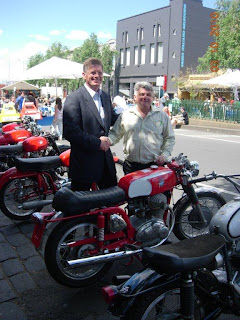 Ted Baillieu MP and Damien Codognotto OAM at the opening of the Italian Museum in Carlton on Sunday, October 3, 2010.
Premier Baillieu (ted.baillieu@parliament.vic.gov.au) would do well to remember that a lot of people in Melbourne's north and west ride motorcycles & scooters to work because they save a lot of time & money compared to a car. 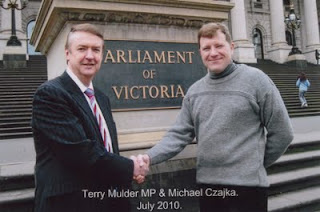 Roads Minister Mulder would do well to compare the cost to this state of on-road bicycle crashes compared with on-road motorcycle & scooter crashes. All levels of government spend hundreds of millions of dollars on bicyclists who do not wear much protective clothing and who do not contribute to the system financially.
Motorcycle & scooter riders wear protective clothing, pay road charges twice, on a car and a bike, and vote.
Damien Codognotto OAM
Independent Riders' Group

The Sunday Age
LIBERALS HOME IN ON TRADITIONAL LABOR LAND
By state politics reporter Farrah Tomazin
"AN ELECTION is three years and three months away, but Ted Baillieu and the Victorian Liberals have already set their sights on Labor's heartland - the working class suburbs of Melbourne's north and west.
Bouyed by last year's victory, the Liberals are targeting traditional ALP strongholds, accusing Labor of neglecting these areas as they move to bolster their own membership base before the 2014 poll.
Liberal state electorate councils - the peak body for local branches - have been set up in Broadmeadows, Altona and Footscray to help devise campaign strategies.
Local MPs and rank-and-file members are being urged by party headquarters to 'get active' early in the political cycle.  ..."
Motorcycle & scooter riders would be doing themselves a favour by getting active in the political cycle. Experience shows there's a lot to be gained from getting organised and using our political muscle.
My local council, Manningham east of Melbourne, budgets over $12 per resident per year for bicycle facilities. That's $12 whether the ratepayer is a bicyclist or not. And this financial year "Bicycle Strategy implementation, $260,000 in addition to linear and shared path developments. ..."
In 2006 the Bracks Government spent an additional $70 million on bicycling. Then there's federal funding given to pushbike riders. Good on 'em. Bicycle Victoria saw how the Motorcycle Riders' Association (MRA) was lobbying in the late 1970s and increased their political muscle while the MRA atrophied.
Two things to think about. Why is it that no one ever compares the real cost to society in dollar terms of road bicycle crashes with road motorcycle & scooter crashes? Will there ever be a real budget for motorcycle & scooter research, safety & facilities while the TAC tax rip off continues?
http://www.gopetition.com/petitions/abolish-tac-antibike-tax.html
The Herald Sun
BREAK THE DANGEROUS CYCLE NOW
By Hamish Heard  heardh@heraldsun.com.au
"THE State Government is moving to quell rising tensions between cyclists and drivers as new figures show 48 cyclists have been killed on Victorian roads in five years. ...
The Government has pledged bike projects totalling $16 million in reponse to the state's booming cycling industry.
City of Melbourne figures show the number of cyclists commuting to work in the CBD each day has more than tripled since 2006 to 6955.
Transport Accident Commission data show 48 cyclists died on the state's roads over the same period.
That figure doesn't include several cases where victims have either died more than a year after the crash or not been on their bikes when they were hit by cars. Other figures show 483 cyclists have been taken to hospital after crashes at 139 crash hot spots in Melbourne since 2006. ..."
The Baillieu Government will take over $7 million in TAC tax off Victorian road motorcycle & scooter riders this year while it gives bicyclists an extra $16 million. That is not fair. If you want to have a say on this issue, send an email to the Victorian Parliamentary Road Safety Committee (RSC).  rsc@parliament.vic.gov.au  The RSC is conducting an inquiry into motorcycle & scooter safety. They will report by June 2012. You can have a look at the motorcycle & scooter inquiry terms of reference and related material by visiting http://www.parliament.vic.gov.au/ and clicking on committees.
Damien Codognotto OAM
Independent Riders' Group
﻿
Posted by Damien Codognotto OAM at 19:14 No comments: