If you ride then you definitely want to do this half day session – this is NOT a standard first aid course as it’s totally geared to riders. By the end of this advanced course you'll be competent in CPR, accident scene management, emergency helmet removal and road trauma injury treatment techniques. In the event you round a corner and come across a rider down you'll be glad you know what to do and so will they! BOOK ONLINE:

Posted by Damien Codognotto OAM at 19:49 No comments: 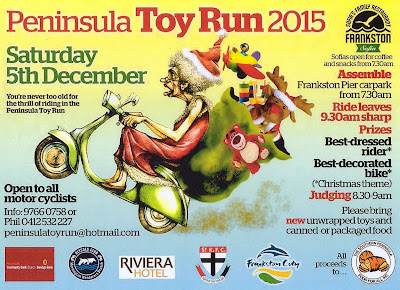 http://motorbikewriter.com/toy-run-father-bob/
Posted by Damien Codognotto OAM at 19:10 No comments:


http://www.adelaidenow.com.au/news/national/distracted-drivers-being-blamed-for-rising-deaths-of-motorcycle-riders/story-fni6ulvf-1227584280959?sv=da009c3f33cf58b9c7e2a4e2f2ac274e
Posted by Damien Codognotto OAM at 17:47 No comments:

The Bathurst, NSW, Street and Custom Motorcycle Show is on again on the first Saturday in February in 2016.

With the Council closing off a main part of Russell Street again  it is expected there will be terrific mix of custom and street motorcycles plus displays from Taylor’s Motorcycle Services, Capital Harley Davidson, Beard Brothers Motorcycles, Bikers Australia, Temporary Australians, Brotherhood CMC as well as a number local motorcycle clubs.

There will be live music, competition and rally awards plus trade stalls, a jumping castle and plenty of shade in the adjoining park for the whole family.

Hope you can make it.


Series 4 Episode 5 : Sunday 3 pm on ONE in Sydney.
We go for a ride up the Putty Road to the Grey Gum Cafe for the Inaugural Temporary Australians Ride and Bike Show. We find out how to adjust to some quirky Melbourne traffic conditions. Will fills us in on some firefighters who like to ride together and we check out a web cam custom in Hobart. Bikers from the Gong take us on a ride through the scenic Kangaroo Valley.We discover the importance of motorcycle friendly lawyers and Sue Walter briefs us on the Snowy River Ride and her son Steven.Plus we find out about one of the judges at the bike show at the Grey Gum Cafe.
Make sure you check your local TV Guides for time variations in different states and territories plus weekly episode repeats.
Posted by Damien Codognotto OAM at 18:43 No comments:


https://youtu.be/HLnoBf8u5oI
Posted by Damien Codognotto OAM at 19:08 No comments:

This video is from 1962, 53 years later motorcycles and scooters are still ignored in regard to helping relieve traffic congestion !

Regards
Steve
Posted by Damien Codognotto OAM at 22:55 No comments:

The Independent Riders Group stall at the Cranbourne GP Run. 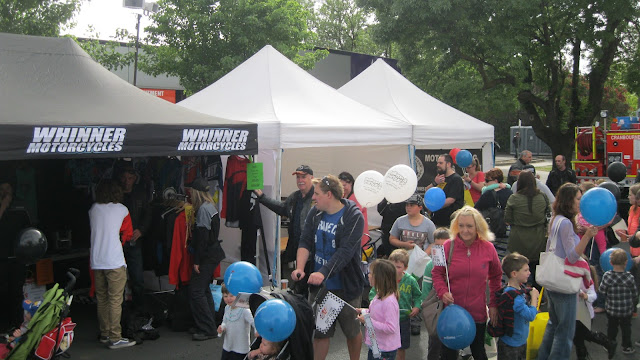 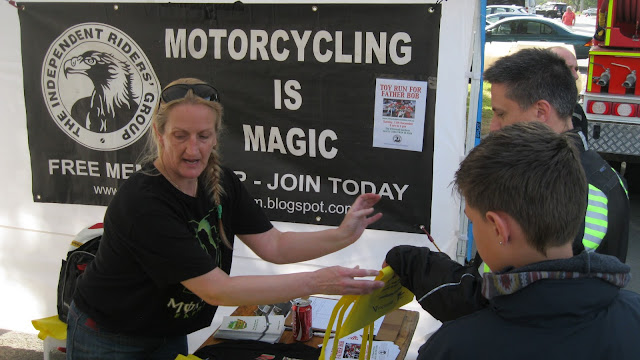 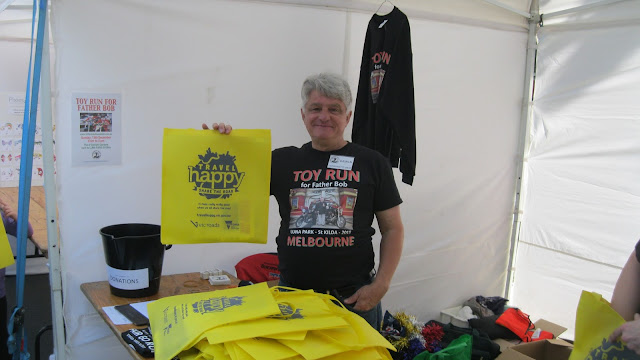 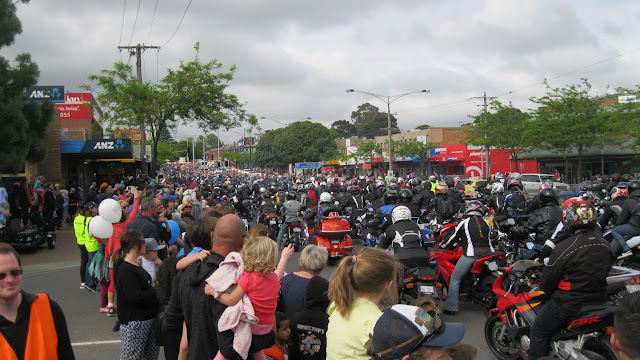 Posted by Damien Codognotto OAM at 21:23 No comments: 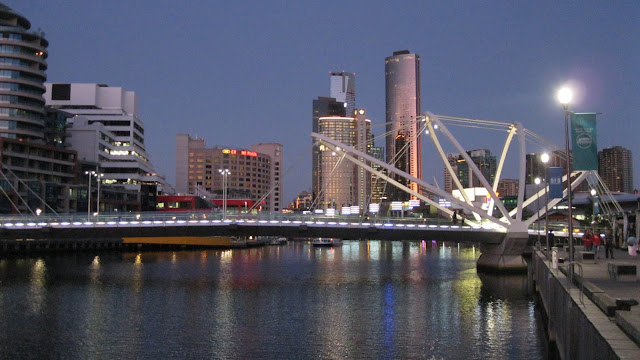 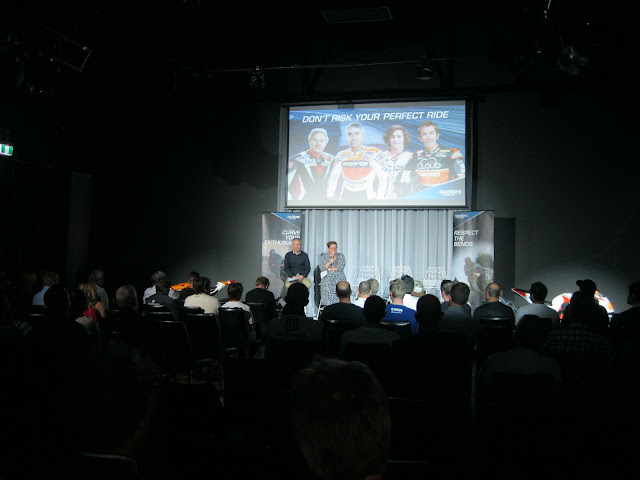 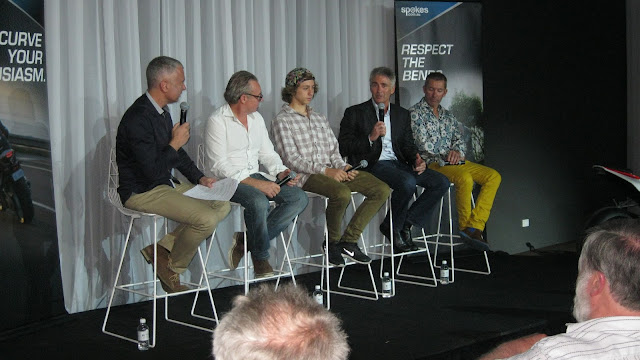 Posted by Damien Codognotto OAM at 21:04 No comments:

The weather for Cranbourne tomorrow (Oct. 17) looks to be dry and mild.

Posted by Damien Codognotto OAM at 15:58 No comments:

Series 4 Episode 3 : Sunday 2 pm on ONE in Sydney
The Veterans Motorcycle Club take us on their Anzac Day Ride. We discover what it takes for Matt Mingay and Lukey Luke to perform stunt bikes dances and how Matt’s young son is following his dad. Kellie from AMCN talks about her role as editor and find out what makes Powder Puff Racing tick. Hobart’s Titan Bike and Trike shows us a ‘Pimp my Ride’ special. We discover the biker friendly Parkville Tavern out side Perth. Homer explains where Marge is and why he rides Oztrikes. We talk to Mark Hinchcliffe about Motorbike Writer and discover why club life helps.
Make sure you check your local TV Guides for time variations in different states and territories plus weekly episode repeats.
Posted by Damien Codognotto OAM at 19:25 No comments:

MELBOURNE MEETING ON MCs ON FOOTPATHS

Given the RACV President's negative attitude to motorcycle & scooter parking on footpaths in Victoria in ROYALAUTO earlier this year and the surprise amendments to the otherwise very positive Melbourne Motorcycle Plan which we were not allowed to question or debate, it would be as well for the motorcycle community to keep its' guard up.

From memory, the amendments appeared on a screen at a Future Melbourne Committee meeting attended by all the city councilors and quite a few motorcycle & scooter riders. The long-standing rules of the meeting did not allow questions or debate. The Motorcycle Plan was voted in unanimously. More than a few riders were concerned that the amendment gave the CoM the power to ban motorcycle parking on narrower footpaths. The thin edge of the wedge???

The Independent Riders Group is happy to work with the CoM to solve a problem where there is a proven problem. BUT, will strongly oppose moves to ban footpath motorcycle parking where no problem is proven. The IRG supports more free on-street and off-street motorcycle & scooter parking and would like to see lockers introduced to encourage the use of protective clothing, especially for commuters.

The issue of motorcycle & scooter footpath parking is on the agenda for the Future Committee meeting next Tuesday, October 13, 2015. It's at the Melbourne Town Hall from 5.30 pm. There is a public gallery so riders should attend. I can't make it unfortunately.

A link to the agenda for the FMC meeting on 13 October is:

A link to the report on motorcycle parking is:

We check out the new Melbourne Motorcycle Expo. Hirsty joins in the 25 year celebrations at the Bankstown Custom Motorcycle Show. Jonesy discovers a Barbarian Bobber and we find out why old Japanese bikes make some Perth bikers very happy. Adrian Wright talks about Harley Davidson’s new Street 500. We discover Exodus Racing and its drag racing journey. Plus we join the fun in the Baylisstic Scramble at the Melbourne Expo.

Make sure you check your local TV Guides for time variations in different states and territories plus weekly episode repeats.
Posted by Damien Codognotto OAM at 15:29 No comments:

The Cranbourne GP RUN is on Saturday, October 17, 2015. The Independent Riders Group has stand B3 in Bakewell Street off the main drag. Come and say hello. Membership is FREE! 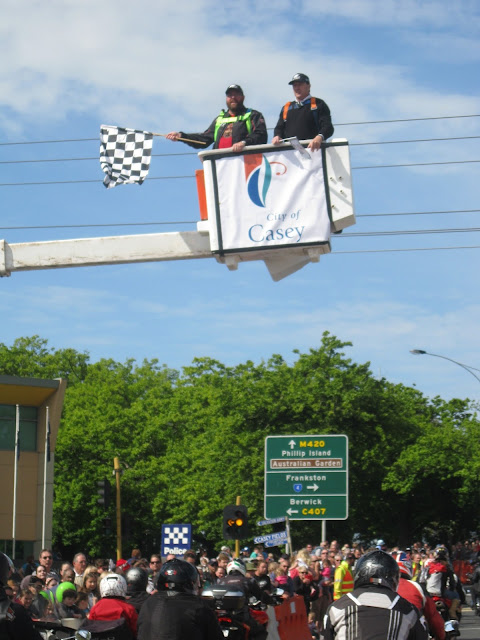 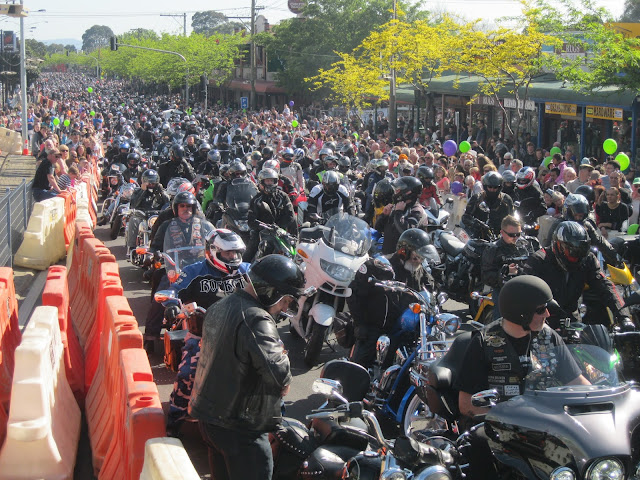 The stand will operate from 8 am to 10 am when 10,000 riders will head off to Phillip Island. You don't have to go all the way to the Island to be part of this great event. This is one of the last big runs left in Australia. 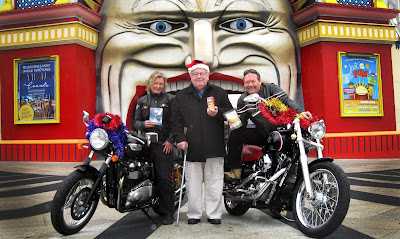 The photo of Heather, Father Bob and Bernie at LUNA PARK will feature on the TOY RUN t-shirt. $30 each (plus pack & post $10 if needed). Proceeds go to the TOY RUN for Father Bob on Sunday, December 13, 2015 in St Kilda. We will have some for sale at the GP RUN.

www.facebook.com/independentridersgroup
Posted by Damien Codognotto OAM at 20:07 No comments: