https://www.vicpolicenews.com.au/news/fatal-collision-in-marysville
Posted by DAMIEN CODOGNOTTO OAM at 20:52 No comments: 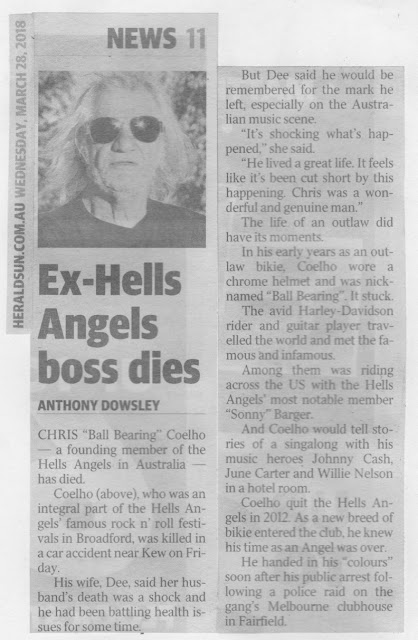 Posted by DAMIEN CODOGNOTTO OAM at 20:43 No comments:

THE HIDDEN BIKE TAX IN VICTORIA 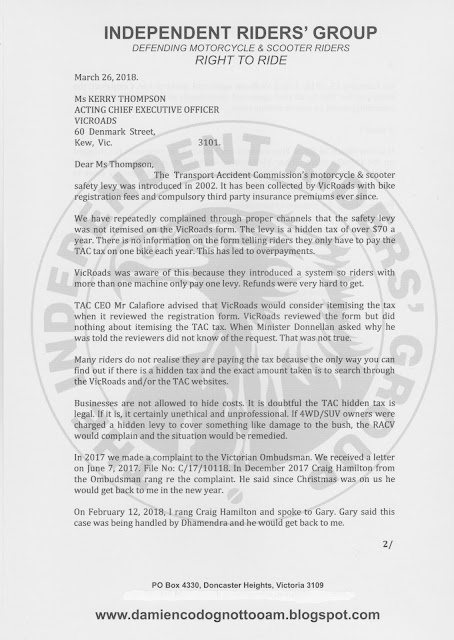 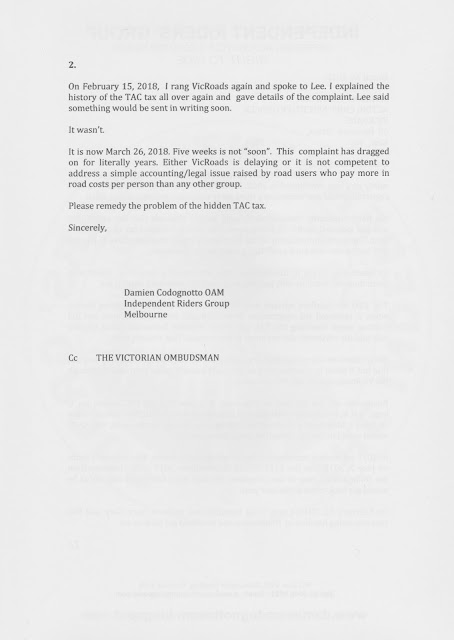 Posted by DAMIEN CODOGNOTTO OAM at 20:19 No comments:

Protest May 8 in Melbourne.


Posted by DAMIEN CODOGNOTTO OAM at 16:29 No comments:

https://www.evensi.com/bad-roads-rally-melbourne-parliament-house/251879925?intercomcode=zbmygSde18JMd1t72nvzTs5KNkyxxa2ZoeCDcEmJ2uH1XiS34pOXAswiPa0pmNddNbye2sOKfNb1dkqyShIyfjyYmjfmmTfzRNMLZ0Z03OTGympGaKKfKm7FCbAz0QCF&utm_source=event_published&utm_medium=email_sparkpost&utm_campaign=invite_promotion&utm_content=event
Posted by DAMIEN CODOGNOTTO OAM at 15:48 No comments: 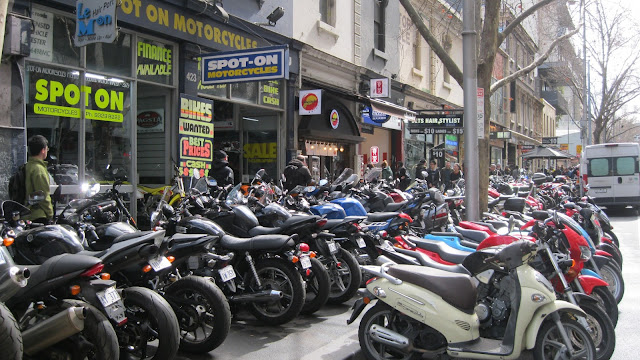 MODAK, probably the oldest operating motorcycle shop in Australia, has closed. The famous Elizabeth Street motorcycle precinct is poorer for it.

Spot On Motorcycles is moving out of Elizabeth Street too.

That leaves only Mars Leathers, Yamaha City and Peter Stevens in the original motorcycle precinct. Very sad. The Street was a major part of Australia’s motorcycle history.

The first motorcycle shop in Elizabeth Street, and probably Australia, was opened by the Milledge Brothers in 1903. That’s 115 years ago.

Elizabeth Street was/is a creek. It was the place to catch a coach to the gold fields in the 1800s. Then a gathering place for horsemen and riders. The creek was covered but it’s still there.

It was a recruiting place for riders for Victoria’s WW1 motorcycle regiment. Riders took their own bikes to war.

After WW1 it became a social hub for the motorcycle community when motorcycle competition was a huge spectator sport in Melbourne. Harold Parsons blew the world away on his Indian.

In the early 1980s the original Motorcycle Riders Association established its’ HQ there. This was a time when riders rights were really important. Just one of the legacies from those years is Victoria’s footpath parking law.

In 1987 the 10th MRA TOY RUN was held in Elizabeth Street. It was opened by Lord Mayor Leckie Ord. World Champion Wayne Gardner was guest of honour. He was introduced to 12,000 riders by past Lord Mayor Trevor Huggard. The MC was comic Rod Quantock. The Hartwell Hotshots, The Cars and Ross Ryan entertained the crowd.

In 1988 the motorcycle precinct hosted the official Bicentennary MRA TOY RUN.  Four city blocks were closed allowing only motorcycles and trams to travel between rows of industry stands and display bikes.

2003 saw the Centenary of Motorcycling held in Elizabeth Street with a motorcycle on display from each year since 1903 courtesy of the Veteran, Vintage and Classic Clubs. It should have been an annual event but it wasn't.

Someone should write another article about Elizabeth Street’s motorcycling history before everyone forgets about it.

Spot On leaving should be covered. It is very old. The shop was rented to Jack Pengally by old man Modak. 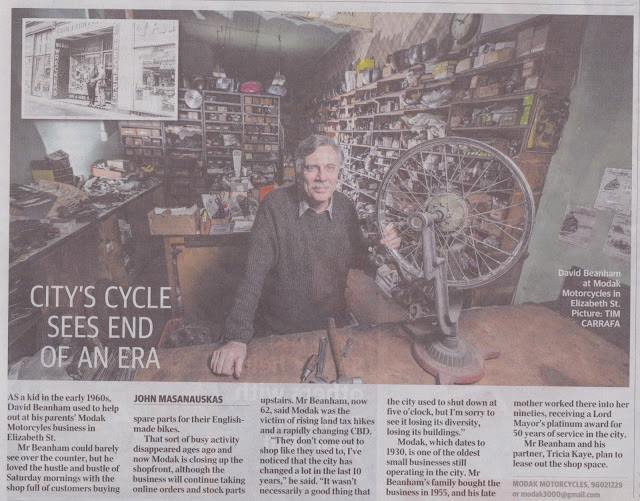 TWO WHEEL TAXIS made sense thirty plus years ago when the taxi authority in Melbourne looked at motorcycles & scooters as paid transport in tourism and in everyday life.

They made sense when the Federal Department of Transport looked at Australian Cities in 2012.

In 2018 two wheel taxis make sense with traffic congestion in our growing cities and public transport failing to keep up with demand for efficient transport.

Of course the Herald Sun could not run a positive motorcycle story without the usual negative stereotyping  included. 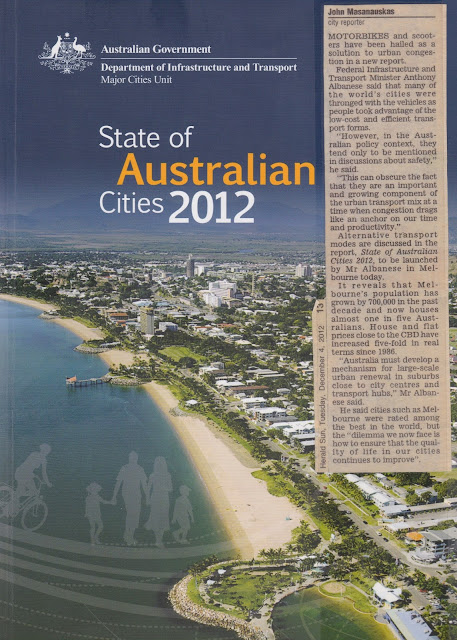 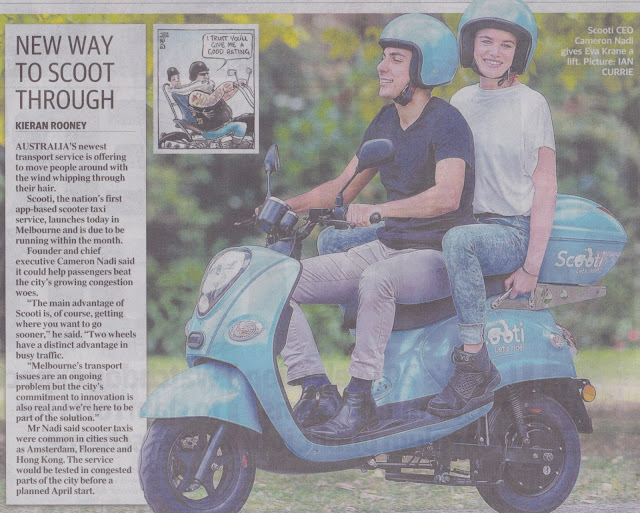 Posted by DAMIEN CODOGNOTTO OAM at 16:59 No comments: 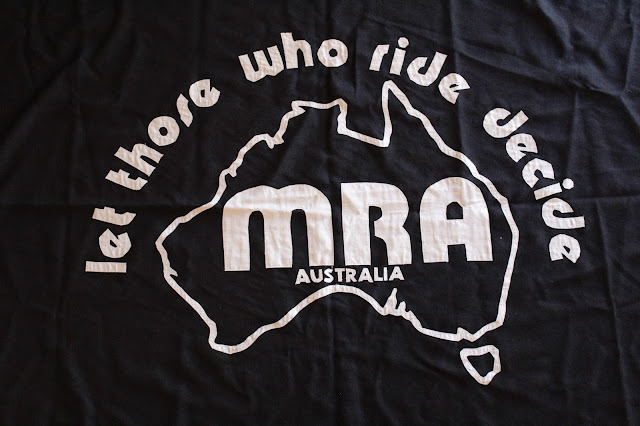 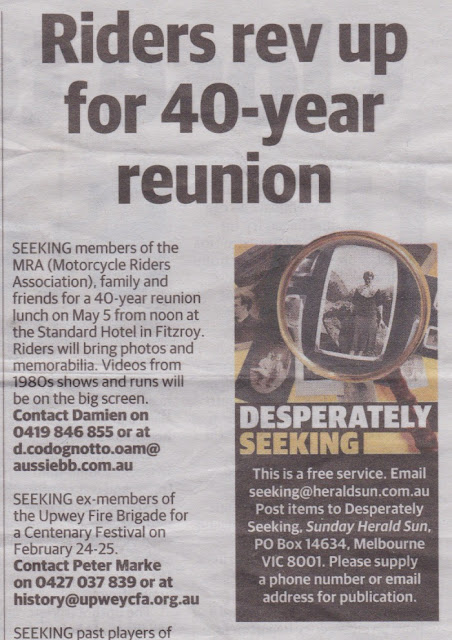 Posted by DAMIEN CODOGNOTTO OAM at 17:11 No comments:

To stop the dangerous neglect of country roads and the costly roll out of wire rope barriers in Victoria print the petition form and attend the BAD ROADS RALLY on May 8.

Collect signatures in ink. Do not put anything on the back of each petition sheet or it may be disallowed. Post petition forms to the MP’s Benalla address on the form.

Attend the BAD ROADS RALLY in front of Parliament House in Melbourne. Encourage others to attend. Drivers, riders, pedestrians all welcome. The more people outside Parliament at 1 pm on May 8, the more media and the more pressure we put on Government to change the dangerous road situation in country Victoria.

If you can’t attend the BAD ROADS RALLY, you can encourage others to attend and you can collect signatures for the petition to stop wasting our taxes on wire rope barriers and put the money into get country roads into safe condition. 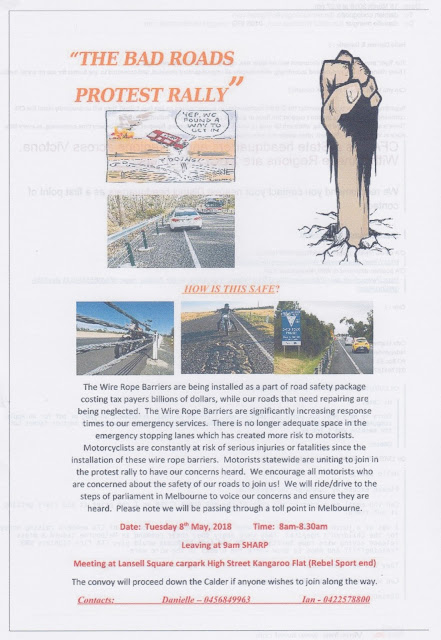 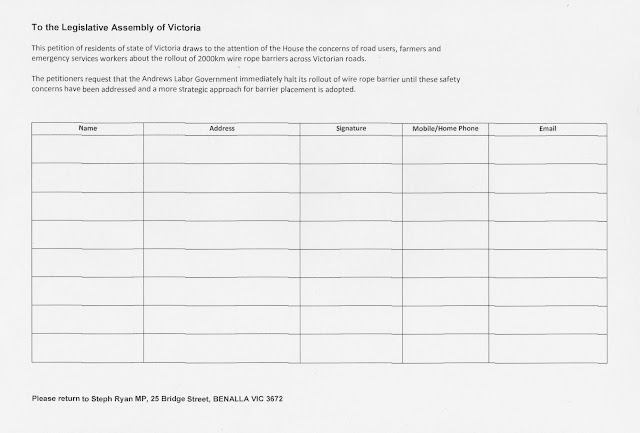 Posted by DAMIEN CODOGNOTTO OAM at 17:07 No comments: 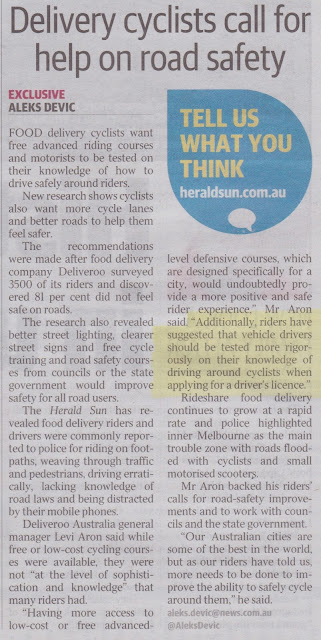 A survey of 3500 bicycle couriers found that 81% of riders did not feel safe on our roads. (RIDER FOOD FIGHT. HS 12/3/2018) Riders suggested that car drivers “should be tested more rigorously on their knowledge of driving around cyclists when applying for a drivers licence. Victoria’s motorcycle and scooter riders strongly support that suggestion. Tougher car licence testing makes safer drivers and reduces traffic congestion by encouraging more people on to two wheels rather than four. 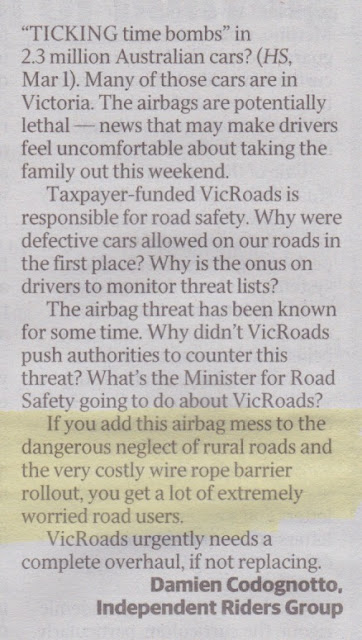 Posted by DAMIEN CODOGNOTTO OAM at 23:24 No comments: