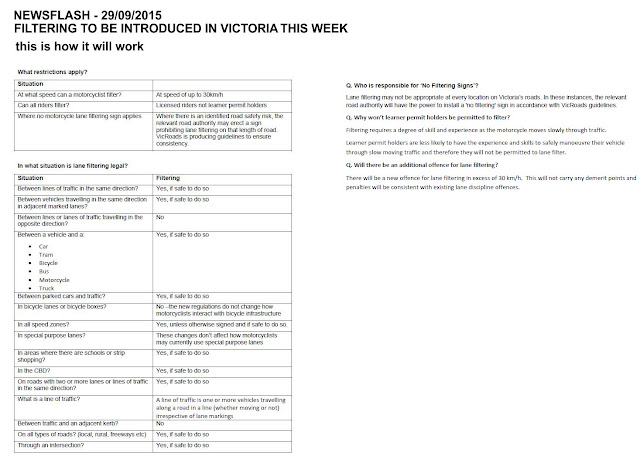 The tragic death of Andrea Lehane who was the victim of a hit & run collision in Carrum Downs, Victoria, police have begun a crackdown on motorised two-wheelers. No excuses for the cowardly thugs who ran away ....but

Maybe, if police had put in half this effort before that awful collision, Andrea Lehane would still be looking after her two kids.

Maybe if Frankston Council had provided a facility for kids to ride real motorbikes in a safe supervised environment, these hoons would not have been tearing around a car park.

Damien
IRG
Posted by Damien Codognotto OAM at 01:25 No comments:

G'day Damien, no doubt you've heard about the WA couple on the Black Dog Ride in the USA?

Here is a link to copy & paste to Facebook, with condolences and respects for our fellow Aussie riders involved.


Cate
Posted by Damien Codognotto OAM at 21:55 No comments:

THE MELBOURNE HERALD SUN EDITORIAL (26/9/2015) on the tragic death of a woman in Carrum Downs, Victoria, was all about crackdowns and punishment and "the monkey-bike menace".

Monkey bikes are toy motorcycles that can be bought online for as little as $100. Teenagers hooning in a shopping centre car park hit a 34-year-old mother of two as she walked on a pedestrian crossing. Her injuries were not survivable. The hoons did not stop. That is the biggest crime here.

There aren't many adults who can say they never behaved irresponsibly when they were teenagers, I certainly can't make that claim. But these youths, young men, took the cowards way out and fled leaving their victim to die. That's unforgivable. To make matters worse, they did not give themselves up until the public outcry made it impossible to continue to hide.

But the hoons shouldn't take all the blame for this death. Their parents must take some for failing to supervise the boys and to teach them that if you cause harm you stop, you try to make it right and you accept the consequences of your actions. They were old enough to know right from wrong.

Police have to take some for letting the monkey bike situation fester in spite of many complaints over many months.

Government departments have to take some for failing to ban these dangerous toys as they ban other dangerous toys. Monkey bikes are not real motorcycles or even real mini bikes.

Local government across Victoria has to take some for allowing the mini bike and off-road bike club scene fail under difficult public liability insurance changes and impossible restrictions when responsible parents try to set up trail parks so kids can learn and ride under supervision, as in past decades. Councils set up skate parks in virtually every municipality. There are bicycle MX tracks and go kart circuits and pony clubs but mini bike clubs are rare. It's not fair to complain about kids on bikes when you shut down most of the places they can ride safely.

And, the media, in this case the Herald Sun, has to take some of the blame for not looking at the whole picture and reporting that the whole of our society has let "the monkey-bike menace" develop. The editorial is all about tracking and fining monkey bike riders and confiscating their bikes. I find this sad because I'm told the Herald Sun Editor is a motorcyclist himself.

Motorcycling has produced many of the world's best competition riders. Outstanding sports men and women who are honoured overseas for representing their country but not given the recognition they deserve at home. Was there sporting potential among the boys who ran down Andrea Lehane?

The Phillip Island motorcycle grand prix carnival in October brings $60 million to the Island and surrounds according to Tourism Victoria.

Touring riders put and estimated $800 million into the Victorian economy every year. The average road rider pays as much to register & insure his/her bike as 4WD/SUV driver does. BUT, we can't afford to bring back trail parks so kids can learn to ride safe instead of hooning in shopping centre car parks.

Posted by Damien Codognotto OAM at 20:36 No comments:

Please pass this email on to the appropriate person/office.

In September 2015 a court in Frankston, Victoria, Australia found that a motorcyclist had broken the law by attaching a camera to their helmet. The fine was $289 and 3 demerit points lost. The court reduced this to $150 but found the rider guilty nevertheless.

Motorcycle & scooter riders in Victoria have been pulled up by police many, many times and not booked for helmet cameras. In other Australian states helmet cameras are legal or tolerated. Some police forces use motorcycle helmet cameras to enforce in-car offences like mobile phone use and the footage is accepted as evidence in courts.

Given this generally benign attitude to helmet cameras in Victoria, we were surprised when this rider was booked. The case went to court no less than 6 times before the magistrate found an offence had been committed.

We understand that the rider was filmed by MOTORWAY PATROL, a New Zealand reality TV show. If this is true, the Victorian Highway Patrol Officer had to be aware of the TV crew in advance which begs the question, was this rider singled out to provide material for TVNZ and public relations advantage for the Victoria Police?

How can we see the footage of the rider being booked for wearing a helmet camera?

The rider is considering challenging the Frankston Court Decision in the Supreme Court. We would very much appreciate TV NZ cooperating in supplying the information and vision requested. (The IRG does not represent the rider.)

I am the producer of Highway Patrol. The incident you mentioned was shot by this programme, not Motorway Patrol.

Sorry I can’t be of any assistance.

Posted by Damien Codognotto OAM at 16:40 No comments: 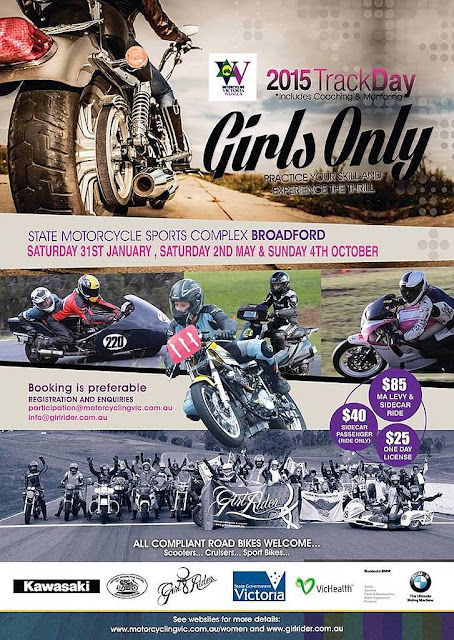 Posted by Damien Codognotto OAM at 18:50 No comments:

http://motorbikewriter.com/helmet-camera-deemed-illegal/
Posted by Damien Codognotto OAM at 00:56 No comments:

Can anyone get there to sit in the public gallery and take notes?

You can see more IRG video newsletters by Bernie Bickerton at

www.independentridersgroup.com
Posted by Damien Codognotto OAM at 21:26 No comments:

Please take a couple of minutes to look at this short Youtube clip then pass it on to as many riders as you can via twitter, facebook, email, whatever. 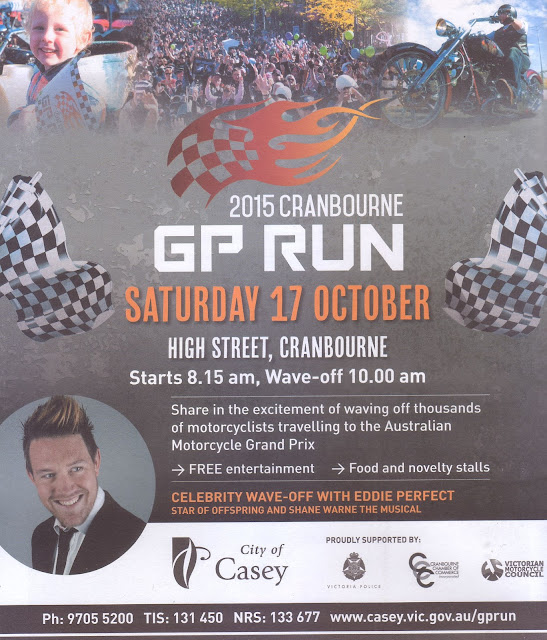 Posted by Damien Codognotto OAM at 22:02 No comments: