Melbourne treats its' riders better than any other city in Australia. The following article is from the August - September 2015 Melbourne Magazine. 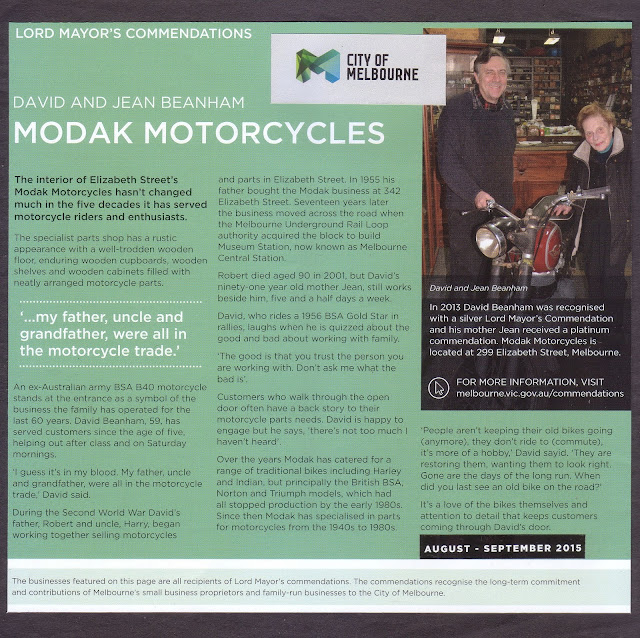 The Elizabeth Street motorcycle precinct is the heart of motorcycling in Victoria. Most riders under 40 know little of the 112 year history of the oldest, continuously-operating bike centre in the world (we know of). That's a shame. 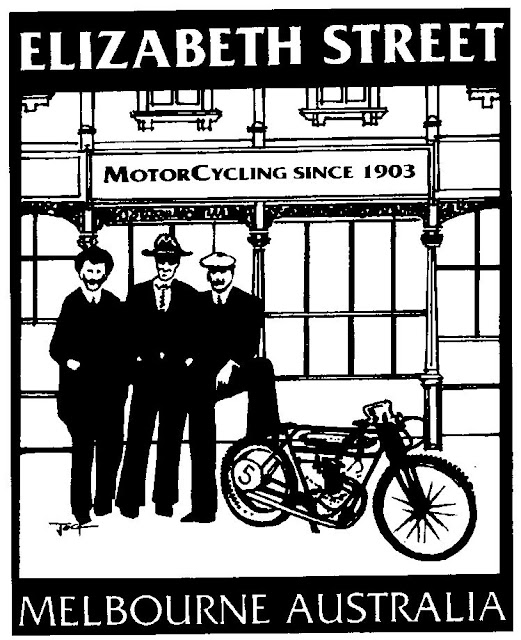 A lot has changed in and near Elizabeth Street, Melbourne.
If you want a glimpse of what motorcycling was like here, half the way back, say 50 or 60 years, visit MODAK.

Damien
IRG
Posted by Damien Codognotto OAM at 23:26 No comments:

The GWOAN have there ride this Saturday to Baileys of Glenrowan, but if you plan to go they need numbers - see email below (and attachment)

Next Saturday it the day of our pizza lunch at The Old Block cafe at Baileys of Glenrowan winery, time from 11.30 am. The locality is Taminick.


Earlier today I spoke to David at Baileys, confirming our intention to be there for our  this Saturday 1 August. We were last there last December.

He said it would be very helpful if they knew how many to expect, so, despite the very late request, if you intend coming, please let either Barb or myself know that you will be there. Then we can let David know of firmer numbers.

Today’s weather forecast for the next week or so is for fronts coming through from Thursday, every two days. But any rain is for the southern part of Victoria, so maybe just a shower or two for our area, which should not put us off.

We look forward to seeing you at Baileys, but please let us know and apologies for the late request.


Posted by Damien Codognotto OAM at 16:29 No comments:

Posted by Damien Codognotto OAM at 19:05 No comments:

HELP FOR THE HOMELESS

Posted by Damien Codognotto OAM at 16:44 No comments: 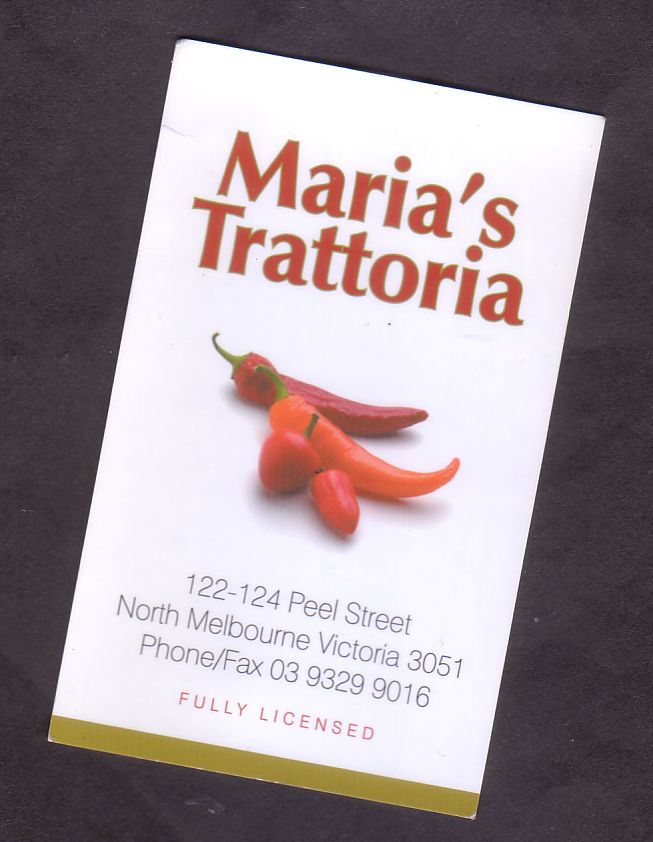 Posted by Damien Codognotto OAM at 15:50 No comments:

The OZ GP RUN is on Saturday, October 17.
The run attracts 8 to 10,000 machines. It leaves Cranbourne for Phillip Island at 10 am. This is one of the last of the big runs left in Australia. It is an experience that no motorcycle or scooter rider should miss. It's FREE and you don't have to be a race fan to go on the ride.

Posted by Damien Codognotto OAM at 14:36 No comments:

http://motorbikewriter.com/toy-run-for-father-bob-confirmed/
Posted by Damien Codognotto OAM at 16:55 No comments:

Article in "The Age" . . .
http://www.theage.com.au/victoria/motorbikers-rally-at-victorian-parliament-to-protest-antiassociation-laws-20150704-gi532s.html

MotorbikeWriter . . . http://motorbikewriter.com/riders-urged-to-continue-protesting/
Posted by Damien Codognotto OAM at 23:00 No comments:

http://www.bendigoadvertiser.com.au/story/3197703/call-to-take-care-on-wet-winter-roads/?cs=80
Posted by Damien Codognotto OAM at 19:33 No comments:

MOTORCYCLES IN THE MEDIA

The following email is going to all my media contacts.

Follow it up. Don't leave it for someone else to do.

Where ever you live, get your local paper. It will have a contact phone number. Ring up and ask to speak to a journo or someone in the editor's office. Tell them you are a local rider and you want to tell them about motorcycle & scooter riding in their area. Get your friends/club involved.

This is a time when we can get attitudes to motorcycle & scooter commuting/touring/sport to change for the better ... but it can't happen unless a significant number of riders get in touch with the media and let everyone know how good we are.

No doubt you would be across some of the media today regarding congestion. Just a heads up that we met with the Herald Sun last week and mentioned there are many ways where congestion can be addressed.

Part of this solution is for increased motorbike users on our road. We are planning to do more in this space so rest assured its not all about cycling and walking!. I'm sure you have seen the below link to what an Insurance company has done recently in the UK.

Anyway would be a great opportunity for you to push some messages out there about the benefits of motorcycling riding while the media are interested.

Posted by Damien Codognotto OAM at 00:09 No comments:

It looks like the City of Port Phillip may compromise over the TOY RUN for Father Bob in St Kilda (Vic).

To do something really worthwhile and bring back the old-fashioned parade TOY RUNs we are going to need funds. Incorporation and public liability insurance being our biggest costs.

There is a Pozible workshop on Monday evening July 20 in Collingwood. I've booked in but I have a family mediation all day that day so I may not be able to get there. I urge you to book in and attend. If you can't go, please pass this link on to someone who can.

What you get from this workshop may be useful for other events you come to be involved in too.

Join us for our June Crowdfunding Workshop at Pozible HQ!

Crowdfunding is about building your fanbase, breaking away from
gatekeepers, breaking down territorial barriers and getting that cash to help make your passion project become a reality.

We will be offering advice on how to plan your project, tips for running your campaign, and pretty much everything you need to know to drop a successful campaign on Pozible, including:


https://au.news.yahoo.com/video/watch/28672468/bikies-protest-against-new-laws/?cmp=st#page1
Posted by Damien Codognotto OAM at 21:08 No comments:

Please read the Herald Sun article. If you have an opinion email the author, Alex White and cc the Minister.

One comment just heard on ABC774 from John Merrett, VicRoads Chief, has my blood boiling; doesn't take much these days!
Firstly, his 'right wing' capitalist attitude contradicts what's best for the broader community ie he assumes a right for car drivers over every other form of transport.

Secondly, his alluding to 'options' for a solution to future traffic congestion mentions cycling & walking, but NO mention of motorcycles or scooters AGAIN/STILL!

Thirdly, his acknowledgement of vulnerability of cyclists & pedestrians, but NO MENTION of same applying to motorcycle and scooter riders.

I've attempted to copy the newspaper article that seems to capture most of the main points, in plain text, no pics, to reduce download size.

Want to stop congestion? Get a new job or ride a bike says VicRoads Chief.

MELBOURNE is heading for a congestion crisis prompting Victoria’s road chief to call on motorists to take the train, ride a bike or get a new job to avoid gridlock.

Nine of Melbourne’s major thoroughfares including the Eastern Freeway, the Monash Freeway and the West Gate Freeway are nearing capacity and will be clogged before 2031 according to traffic projection data obtained by the Herald Sun.

VicRoads CEO John Merritt admits roads are already overstretched city-wide during peak hour and with no big road infrastructure projects on the horizon frustrated motorists must find ‘alternative modes’ of transport or work closer to home.

``You can’t simply build your way out of congestion.’’ he said.

``It sounds sort of strange but we are witnessing now a sort of change already in how the city functions.

``People are making different choices about how they want to live and work.

``Those who have got an option of driving, walking or cycling we know that they will walk or cycle if they are safer.’’

``And clearly as part of the planning of the city we need more jobs out where people live so they are not driving as far or at all.’’

The latest shift in strategy comes after the Andrews Government controversially axed the East West Link earlier this year forking out $640m to settle the contracts before a shovel was even lifted.

But with the tunnel to finish in 2026 Mr Merritt admitted Melburnians would experience increasing congestion during the next decade.

In April it was revealed Melbourne’s congestion had reached record levels with motorists at a standstill for almost a minute for every kilometre travelled.

A person living 25 kilometres from the city can now find themselves stationary for 40 minutes during the peak hour run.

VicRoads experts have predicted growing congestion would cause cars to spill off the highways leading to rat running in inner city areas including Monash, Stonnington, Moreland and Boroondara, as frustrated motorists try to find quicker routes.

Work has already begun on local streets in some areas to handle the increasing traffic.

Controversially Mr Merritt suggested some Melburnians could look for work closer to home in order to minimise their commute.

``It places limits on people’s employment opportunities,’’ he said.

``In Melbourne the high paying jobs are concentrated in the city centre. People in lower value jobs are being pushed to the outer suburbs.

``There are not a lot of cities around the world telling people to fix the transport system by working locally, that will not work.’’

Stefan Metayer said he would prefer to catch a train from the station 300m away from his Ringwood home, but needs his car to get to meetings from his South Melbourne construction company.

He leaves home at 6.30am along the Eastern Freeway for a 45 minute commute, and leaves work at 4pm to ensure he spend the minimum time commuting for maximum time with his young family.

“If you leave at 7am or 7.15am, it can be an hour and 15 minutes. Going home you never know. “When I left on Friday I got stuck outside the football game. It took one and a half hours. That’s just madness to sit in a car that long,” Mr Metayer said.

“If I haven’t left home by 7.30am, it’s more productive for me to stay home, work on the laptop and go in at 9.15am. It’s pretty hectic. Even if they widened Punt Rd, everything bottle necks.”

``Roads are a vital part of the transport mix that includes our train networks, tram lines, bus routes, cycling paths and pedestrian paths,’’ she said.

In the bid to alleviate some stress for drivers VicRoads are attempting to enhance existing thoroughfares.

This includes bus lanes on the Eastern Freeway, widening of the M80 and upgraded road technology to be implemented on the Monash.

Mr Merritt refused to comment on the proposed $5.5 billion Transurban proposal link between the West Gate Freeway and CityLink, which is currently being considered by the Department of Treasury and Finance.

Early reports indicate the road will help traffic flow on the West Gate Bridge but the plan could see commuters hit with billions of dollars in hidden toll fees.

Cycling is also expected to play a major role in VicRoads new strategy with Mr Merritt saying people should consider the pushie to get them to work quicker.

``Anyone who is walking or cycling takes a two tonne car off the road,’’ he said.

``One of the frustrations there at the moment is the evidence of some tension between cyclists and particularly drivers, when it is so obvious that from a drivers point of view it is fantastic.

``Honestly you will be handing them a banana out the window saying thank you very much for not driving.``

According to Bicycle Network Victoria figures show people are happy biking up to 45 minutes or 10km to work.

Posted by Damien Codognotto OAM at 17:34 No comments: 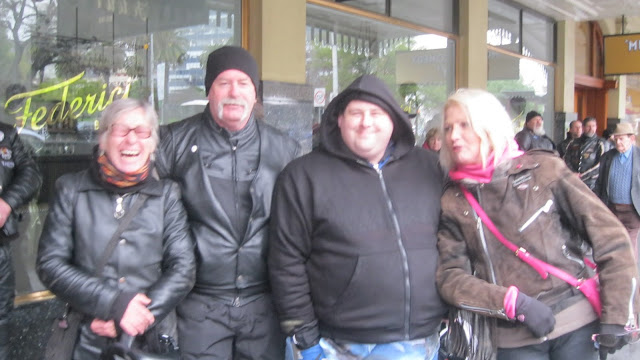 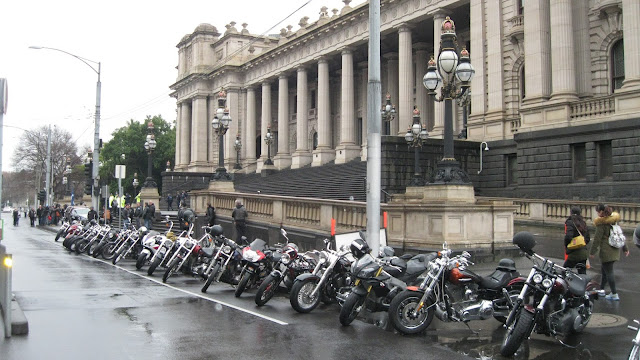 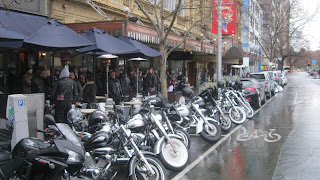 Posted by Damien Codognotto OAM at 21:09 No comments:

You will be interested in the article I’m publishing this afternoon at 5pm on this URL:

Please feel free to share it with your social media pages.

Cheers and good luck on Saturday!
Mark Hinchliffe
Posted by Damien Codognotto OAM at 22:06 No comments: