THE STRATH CREEK PUB needs help. If you can, please do. 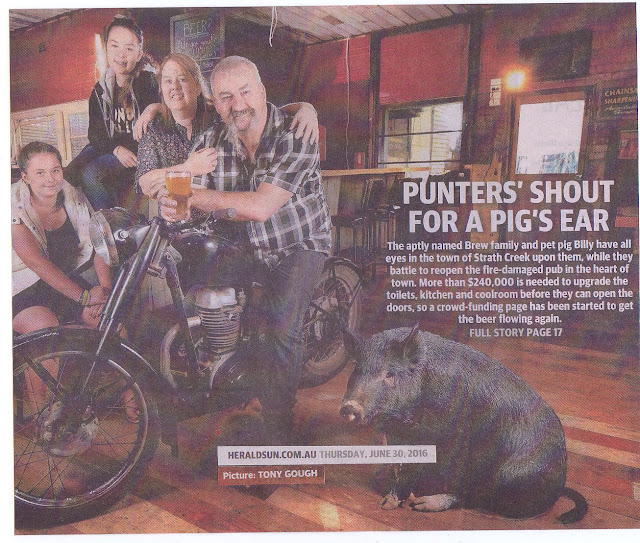 Posted by Damien Codognotto OAM at 16:38 No comments: 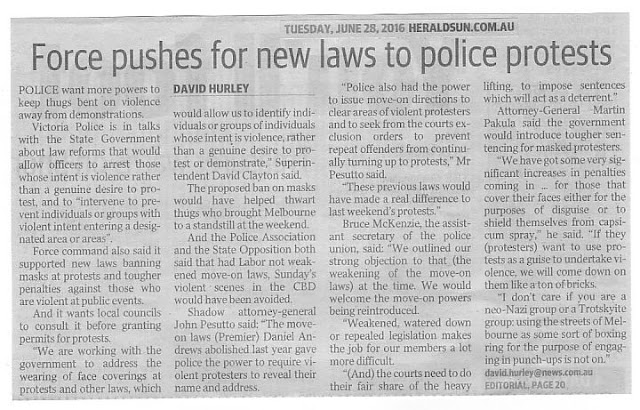 Posted by Damien Codognotto OAM at 21:32 No comments:

SYDNEYSIDER GREG HIRST was in Melbourne this week doing interviews for the next series of his TV show, Temporary Australians. Among those he interviewed were the Victorian Roads Minister Luke Donnellan MP, the Freedom Riders' Dale Maggs, Rob Salvatore from the VMC, me for the IRG and Heather Ellis on her role on the state's Motorcycle Advisory Group and publishing her book, UBUNTU.

Posted by Damien Codognotto OAM at 15:54 No comments:


Mrs Jean Beanham of MODAK in the famous Elizabeth Street Motorcycle Precinct passed away last week. She was 92.

The first motorcycle shop in Elizabeth Street was opened by the Milledge brothers in 1903. Mrs Beanham was a big part of Melbourne's motorcycling history. She will be remembered.

Damien
IRG
Posted by Damien Codognotto OAM at 15:46 No comments: 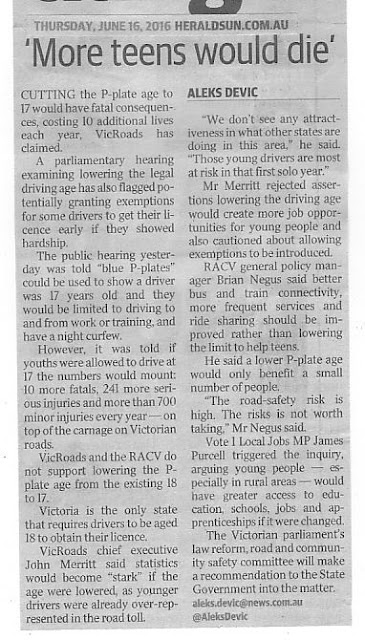 Posted by Damien Codognotto OAM at 17:56 No comments: 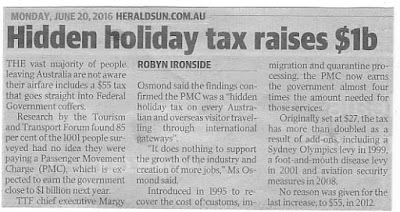 Does this remind anyone of the TAC antibike tax (safety levy) rip off in Victoria?
Posted by Damien Codognotto OAM at 08:55 No comments:

NO FIRE BIKES FOR MELBOURNE

It's not surprising the UFU paid fire fighters are giving the CFA volunteers problems.

Honda supplied the MFB with a fire bike for a trial to see if fire bikes worked in our city as they do elsewhere. The bikes carry a trained fire fighter, radio comms in his/her helmet, extinguishers and a first aid kit.

Most call outs in the city are false alarms or small fires in rubbish bins and the like. These problems are easily fixed by a single fire fighter. Fire bikes do not cause CBD traffic chaos at peak times, do not require a large crew to operate and do not cost as much to buy and run as fire trucks. Fire bikes also respond to alarms faster.

The UFU objected to the fire bike trial and the concept was dumped.

VicRoads wrote to the Independent Riders Group (IRG) excusing/explaining the errors in its' ABS leaflet. The IRG wrote back asking: If the ABS leaflet was passed by the Motorcycle Advisory Group (IRG) at VicRoads? How the ABS leaflet and mailing was paid for? And, if the ABS leaflet and mailing were paid for out of the TAC antibike tax "safety levy" money. IRG Members will be emailed copies over the next few days. You can join the IRG at www.facebook.com/independentridersgroup . The IRG urges all motorcycle & scooter riders to go to see your state MP. You can find your local MPs details at www.parliament.vic.gov.au/members .

From an IRG Member:


“VicRoads acknowledges that some of the information contained in the recent renewal notice was poorly worded. However it stands by its position that ABS is an important technology for motorcycles that could significantly reduce the number of lives lost and serious injuries on our roads.”

Poorly worded, my butt. This stinks of typical corporate cover up.

No, it is totally false, it is in fact, unequivocal dribble. Facts and the use thereof, zero, zip, nada, nil. Poorly researched, no, not even. Clearly no, that is zero research has been undertaken, on the availability of aftermarket ABS systems for motorcycles, which then brings into question, if such systems were available, how many lives would be lost, and injuries would be sustained? All upon the advice of VicRoads.

I draw your attention to two groups, of vastly different road users, the two extremes of Victorian road users, the long and short of it, (pun intended) the Victorian Motorcyclists and Victorian and interstate truck drivers, whom both claim the exact same thing. The greatest danger to themselves and other road users are in fact, the average, uneducated, foolish, it’s all about me, selfish, moronic car driver. What if anything is VicRoads doing or advising on this matter? (no pun intended).
Or does not VicRoads advice on such matters that the populous would deem unpopular. Who is the gutless ones? The Victorian government, it’s ministry or it’s VicRoads, and it’s entitled, elite, welfare recipient,  expert advisors?

Once again the question of how this load of codswallop and the publication was funded. Was it from the discriminative “motorcycle safety levy”?
Once again was passed by or through the “motorcycle advisory group”?
Whom, did authorise this load of dribble? Are they going to be held to account for their actions?

Keep the pressure up mate, this shit strengthens our position on a call for a independent ombudsman’s enquiry, into law changes and VicRoads, as well as VicPol.

Police have known about the monkey bike problem for a long time but did little about it till the young Mum was tragicly killed by a teenage hoon in a Melbourne bayside suburb. Hoons on monkey bikes and grossly irresponsible parents give all motorcyclists a bad name.

Police should make it very very clear that crash and injury data on monkey bikes are related to  "unriders" not legitimate road riders, but they don't. Twenty nine people died in crashes involving motorcycles or scooters in Victoria in the first five months of 2016. I'm told one of them was a fourteen year old who stole an unregistered trail bike. It was his first and last ride but police used it to demonise legitimate road riders and lobby for more restrictive legislation. 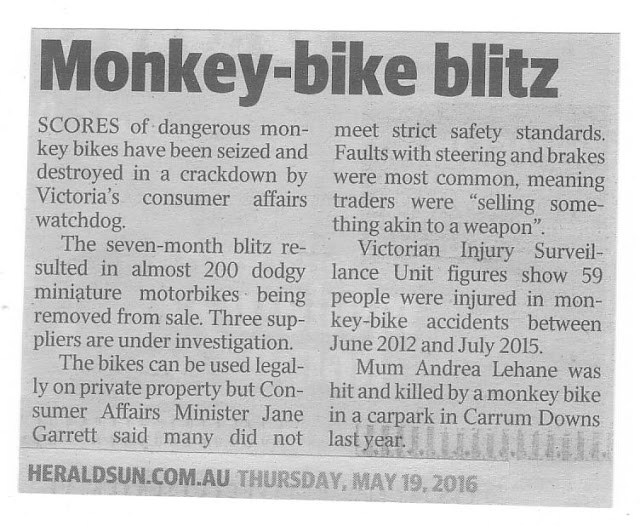 Posted by Damien Codognotto OAM at 16:47 No comments:

THE MELBOURNE HERALD SUN REPORTED on May 27, 2016 that police booked more car drivers than motorcycle or scooter riders on day one of their blitz targeting riders - Operation Motus.

After a strong and angry backlash to Operation Motus Snr Sgt Papas said. "The aim of Operation Motus is not to demonise motorcyclists, but rather to educate where available and enforce where necessary".

The vast majority of road riders are law-abiding tax payers who resent the repeated vilification of the motorcycle & scooter community by police and the media. It is clear that if police targeted a type or brand of car, say all utes or 4WDs, there would be an outcry from the likes of the RACV or the Herald Sun or 3AW. The very public launch of Operation Motus by Assistant Commissioner Doug Fryer did exactly the opposite to what he claimed he wanted. It said to the non-riding public that people on powered two-wheelers urgently need policing. That can create very dangerous situations for riders in traffic.

In our still democratic society, we, the tax payers, employ police to enforce existing laws. We elect representatives to Parliament to review existing laws, make changes if needed and introduce new laws where necessary. The Victorian Parliament does this through its' road safety committees which are made up of MPs from both sides of the politics. Road authorities and stakeholders have input at the inquiry stage. It is not for Mr Fryer to run publicity campaigns and lobby our representatives to introduce laws that fit a police agenda.

The 2012 Victorian Parliamentary Inquiry into motorcycle & scooter safety (PIMS) did not recommend more mandatory protective clothing for riders. One line in the PIMS report made the problem of bike safety crystal clear. "Addressing (crash) data issues is the single most critical aspect of our future response to motorcycle safety." Road law should be based on facts and good  science not opinions and departmental agendas. Road crash data collected mainly by police is inadequate. This has been documented by at least three inquiries in the last ten years.

More mandatory protective clothing will reduce choice for riders and significantly increase costs which will mean less incentive to buy the right gear not more, in spite of police lectures.

There is a Federal committee developing a star rating system for protective bike gear that is supported by most if not all stakeholders.

Operation Motus started as a very public crack down on all motorcycle & scooter riders which in itself demonises our community. It turned out to be a public relations train wreck for Victoria Police but it did high light need to prosecute more in-car offences, especially mobile phone use by drivers.

Posted by Damien Codognotto OAM at 18:36 No comments: