MELBOURNE RADIO STATION 3AW (AM 693) did not cover itself in road safety glory today.

Antimotorcycle announcer Neil Mitchell ran another of his gosh-i'm-so-concerned items on the recent Pyalong crash where four young men died. I did not hear every word of the morning show but this is my recollection of the program.

Early in the morning on January 29, on what looked like a reasonably safe stretch of road, a car went out of control. It struck the end/anchor of a wire rope barrier (WRB), got airborne and hit a tree well above the ground ... roof first. Apparently there were no skid marks but there was no suggestion of excessive speed either.

By hitting the tree roof first most of the safety value of seat belts, crumple zones and airbags in the car was lost. The young men died.

A Canadian wire rope barrier expert interviewed by Mitchell said he had never heard of a car flipping in a WRB crash.

VicRoads knew that WRB can filip or roll cars. Monash University smash research centre ran crash tests at Laverton in the early 2000s. WRB on a flat, hard surface, struck at the perfect angle, rolled and destroyed at least one Toyota Echo. I saw the video of the tests. The full report on those tests has never been released and a legal technicality prevents us using freedom of information to get that information. The researcher in charge then, I believe, was Raphael Grzebieta who now works for a NSW research agency.

The Australian media has documented many WRB fatal crashes including the 2011 crash on the Western Highway out of Ballarat. A 4WD towing a trailer went out of control on a relatively safe road, went through a WRB and hit trees above the ground. Two died on site, two more later. The WRB did not perform as the road authority spin doctors and manufacturers said it would. Four dead.

As with the Pyalong fatal, police did not say excessive speed was a factor.

Later, IRG member Dale Maggs visited the site and noted the position and size of the trees involved. It seems they were planted some years before when the road was upgraded. When it was pointed out that the trees planted in the road upgrade were against VicRoads guidelines for roadside plantings the regional manager denied such a document existed. 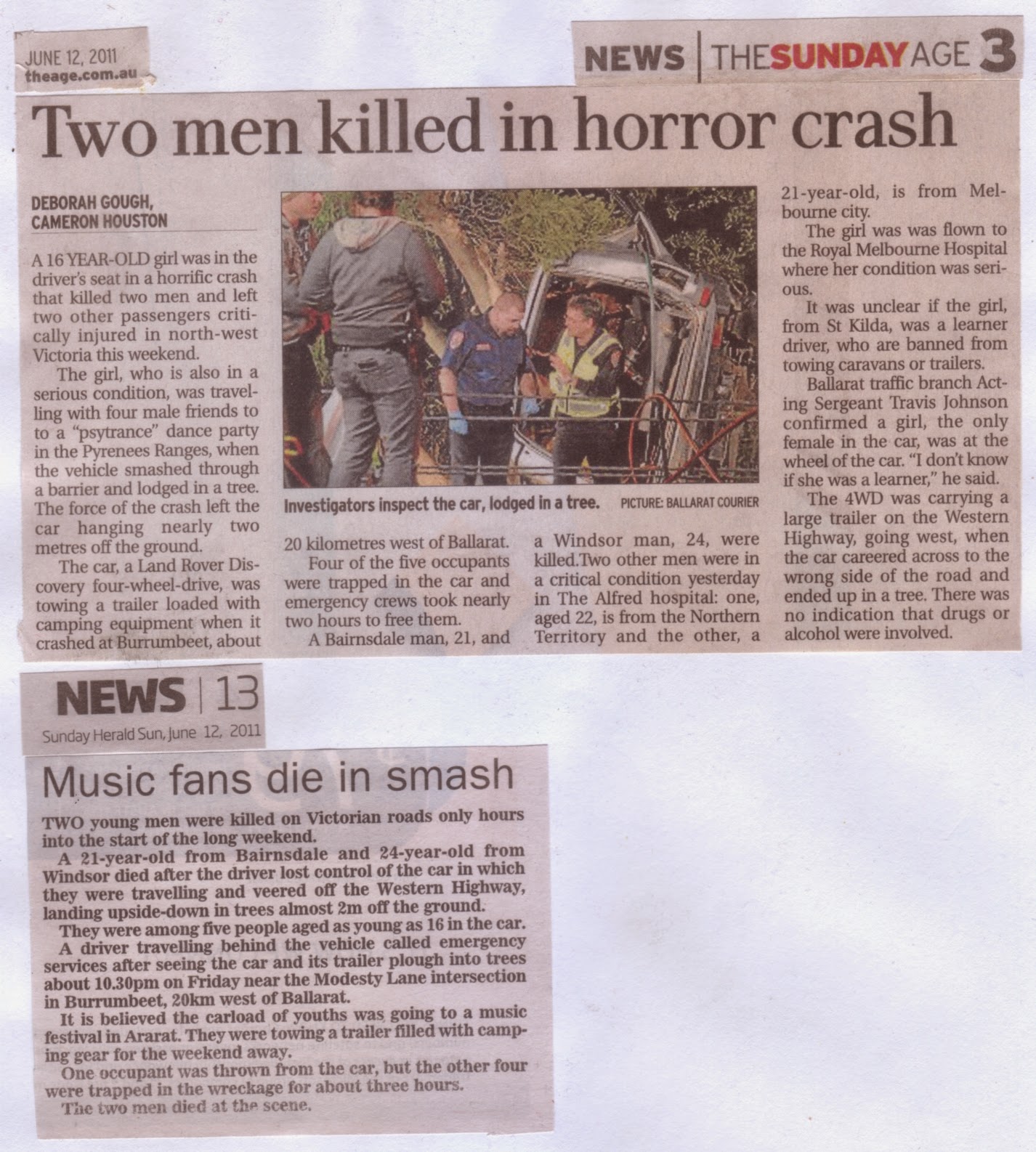 The Independent Riders Group (IRG) tried to find out when and where the Coroner's inquest was. IRG wanted observers to hear evidence on the crash given to the court. Without the cooperation of the court it is extremely difficult for road safety stakeholders to find out the time and place of Coroner's hearings so VicRoads/Police mostly have a monopoly on "expert" advice to the court.

The Canadian expert also stressed the need for regular inspections of WRB to check cable tension. The suggestion was that WRB should be checked twice a year. Victoria's 700 kilometres of WRB is not inspected every six months.

The Holbrook, NSW crash on November 6, 2014, where a truck ran onto the median of a 110kph Hume Highway. Two WRBs were extensively damaged. In spite of a picture story on the damaged WRBs in the Border Mail newspaper on December 8, the road authority did not start repairs for nearly nine weeks. During those nine weeks road users on the Hume faced a road hazard near Holbrook rather than a median strip barrier. This was especially true for motorcycle & scooter riders since the road authority left the bent steel post facing traffic for at least two months. A rider sliding into these spikes would face a horrible death. 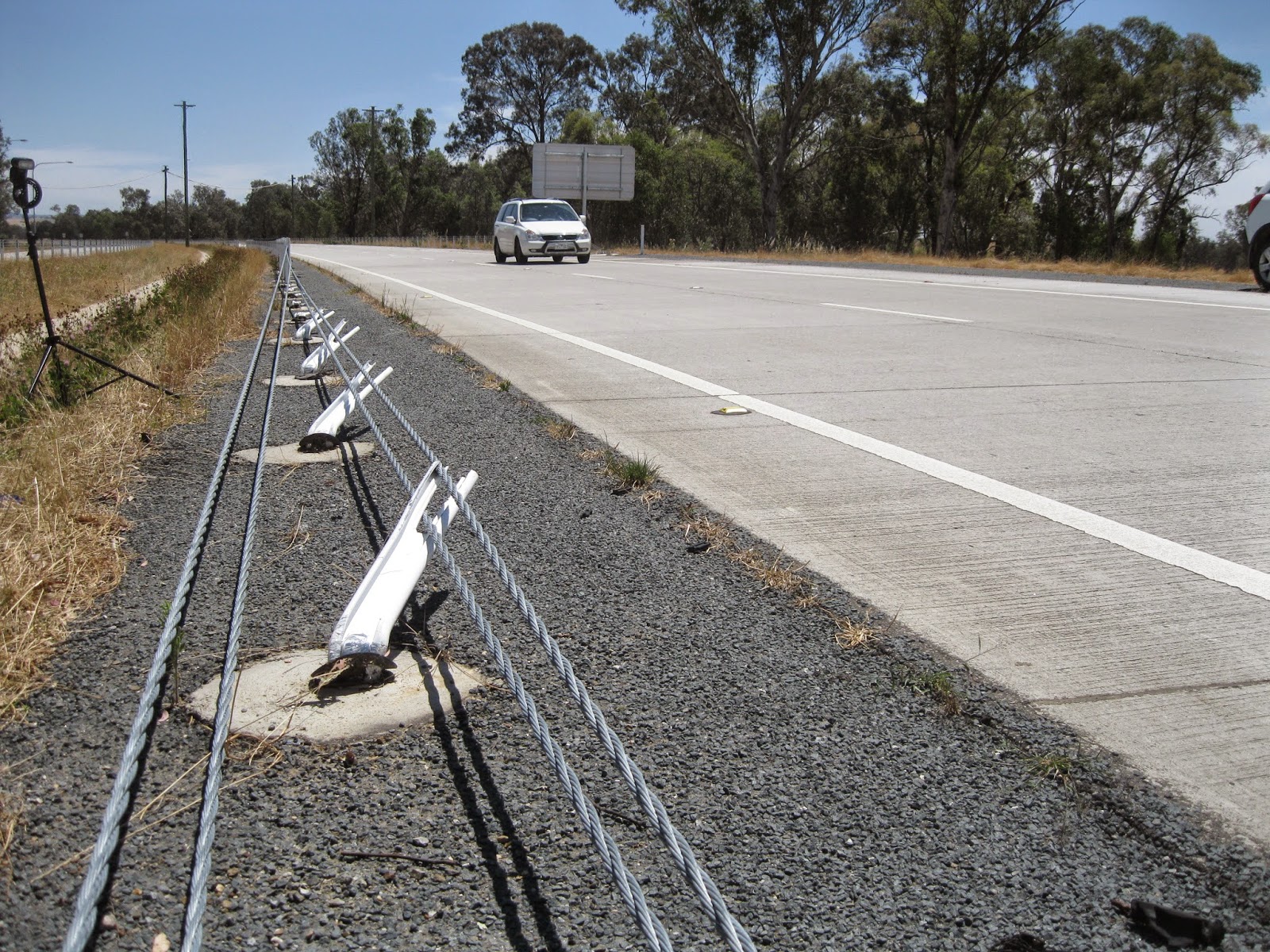 IRG requests for a list of links to information on WRB research from Marg Prendegast of the NSW Road Safety Centre and from VicRoads regional director Bryan Sherritt have so far NOT been answered.

VicRoads coordinator for Road Safety David Shelton said 700 kilometres of WRB had been installed on Victorian roads and more was going in. He implied hundreds of millions of (tax) dollars had been spent on WRB and said a billion dollars more would be spent on road furniture in coming years. When asked how often regular inspections of WRB were done in this state Shelton dodged a real answer.

A sub-contractor who repaired road barriers was vague about WRB inspections and requirements in various parts of the state.

Shelton made the extraordinary claim that WRB stopped 90% of run-off-road crashes! Think about that claim. Yet Mitchell failed to ask Shelton for direct references to research proving this. Several Victorian Parliamentary inquiry reports have documented the sad state of crash site data. The first recommendation of the 2012 inquiry report into motorcycle & scooter safety was to set up an independent road trauma data authority. Of course VicRoads/TAC/Police opposed this.

If Mitchell asked Shelton for titles or links to research proving WRB was safe in Australian conditions (WRB is banned in places in Europe), I did not hear it. What I got from Shelton's interview was that there was no hard evidence indicating WRB was safe and that road authorities have a massive vested interest in WRB working.

I think three things are obvious.

WRB does not work in too many situations at highway speeds.

WRB is not regularly inspected for safety in Victoria is usually not repaired in timely fashion after damage.

WRB is a deadly threat to motorcycle & scooter riders. There is no evidence to suggest otherwise.

A bike crash into WRB, at less than highway speed, on the Cann River Highway in eastern Victoria, in February 2014(?), reportedly left a female motorcyclist in several pieces along the road ... literally. I was told that by an emergency service worker who attended the crash site, then it went quiet and we could get no further information on the crash let alone the date and place of the inquest.

VicRoads knows the posts of WRB are deadly dangerous to motorcycle & scooter riders. It has used more than one type of  "padding" on WRB posts thereby admitting the hazard to riders. But the pads are a knee-jerk reaction to the problem, a bandaid on an amputation. The pads have only ever had a weathering test at Ferntree Gully in Victoria and "drop tests" by manufacturers. If WRB post pads were impact tested to see their effect on riders' bodies, even in low speed impacts, I'm sure they would fail.

In the Pyalong crash there were four dead. It was suggested that this was an unusual crash, that most WRB car crashes had a happy ending. With hundreds of millions of tax dollars spent and careers at stake Australian road authorities are very keen to avoid any hint of failure in their duty of care to road users and/or any suggestion that they might be legally liable for road furniture that increases the severity of injury/damage in road crashes.

I tried to ring 3AW on both the talkback line and the office line. I left messages. I emailed the station hoping Mitchell would ask at least one tough WRB question. No one got back to me. Mitchell let Shelton and the sub-contractor off very lightly I thought.

In my opinion, 3AW did nothing for road safety this day.

Damien
IRG
Posted by Damien Codognotto OAM at 15:06 No comments:

The Victoria Police could learn a lot about enforcing phone/drive laws from the blokes in WA.

Would you like an annual motorcycle & scooter festival in Elizabeth Street, Melbourne?


https://www.youtube.com/watch?v=Vi1os0krv2c
Posted by Damien Codognotto OAM at 01:03 No comments:

You can see earlier video newsletters at:

Damien
IRG
Posted by Damien Codognotto OAM at 15:39 No comments:

THE BARRY THE BIKE BOOKS were a labour of love for Jeremy and Mary Ann Furness. Jeremy was a member of the original Motorcycle Riders Association. 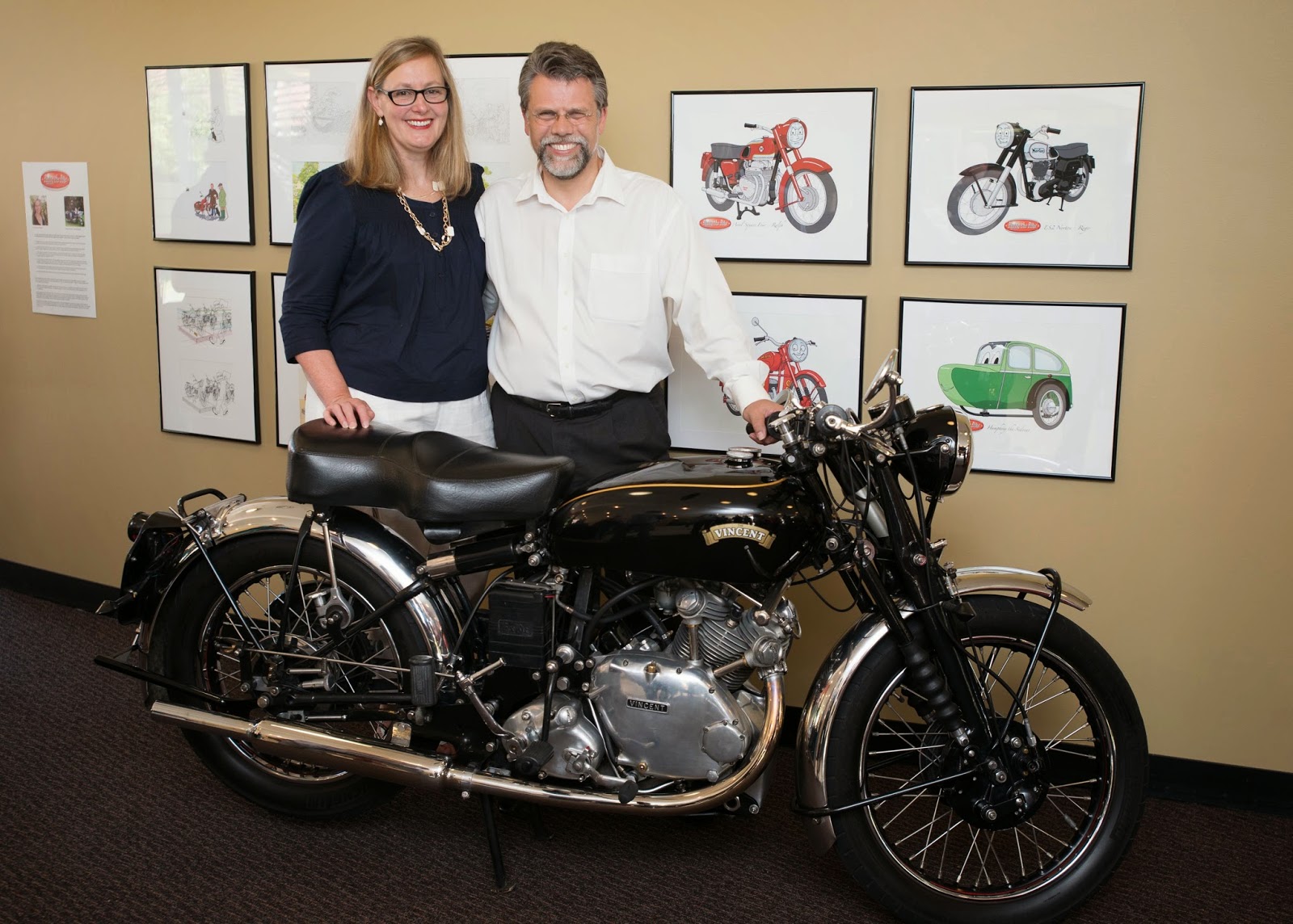 The books were written and produced here in Melbourne. If you want an Aussie present for for an Aussie kid, ring or email Jeremy. Please share/email this info to other riders. 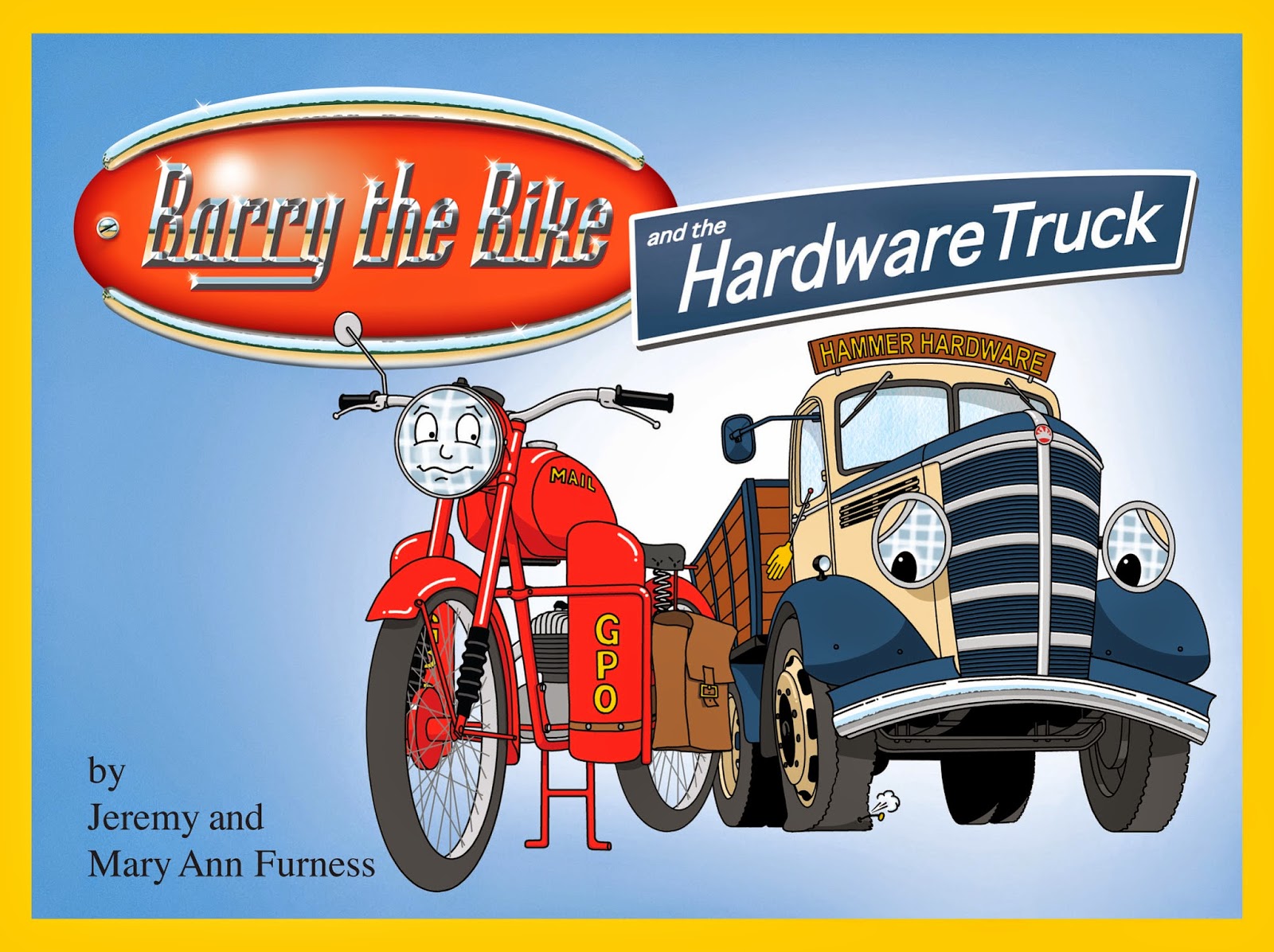 The books are $14 each which includes postage and packaging anywhere in Australia. To order a book please call us on (03) 9724 9255 or mobile on 0403 310 032, or email me on sales@barrythebikie.com. We post out straight away and sign the books if requested. www.barrythebike.com 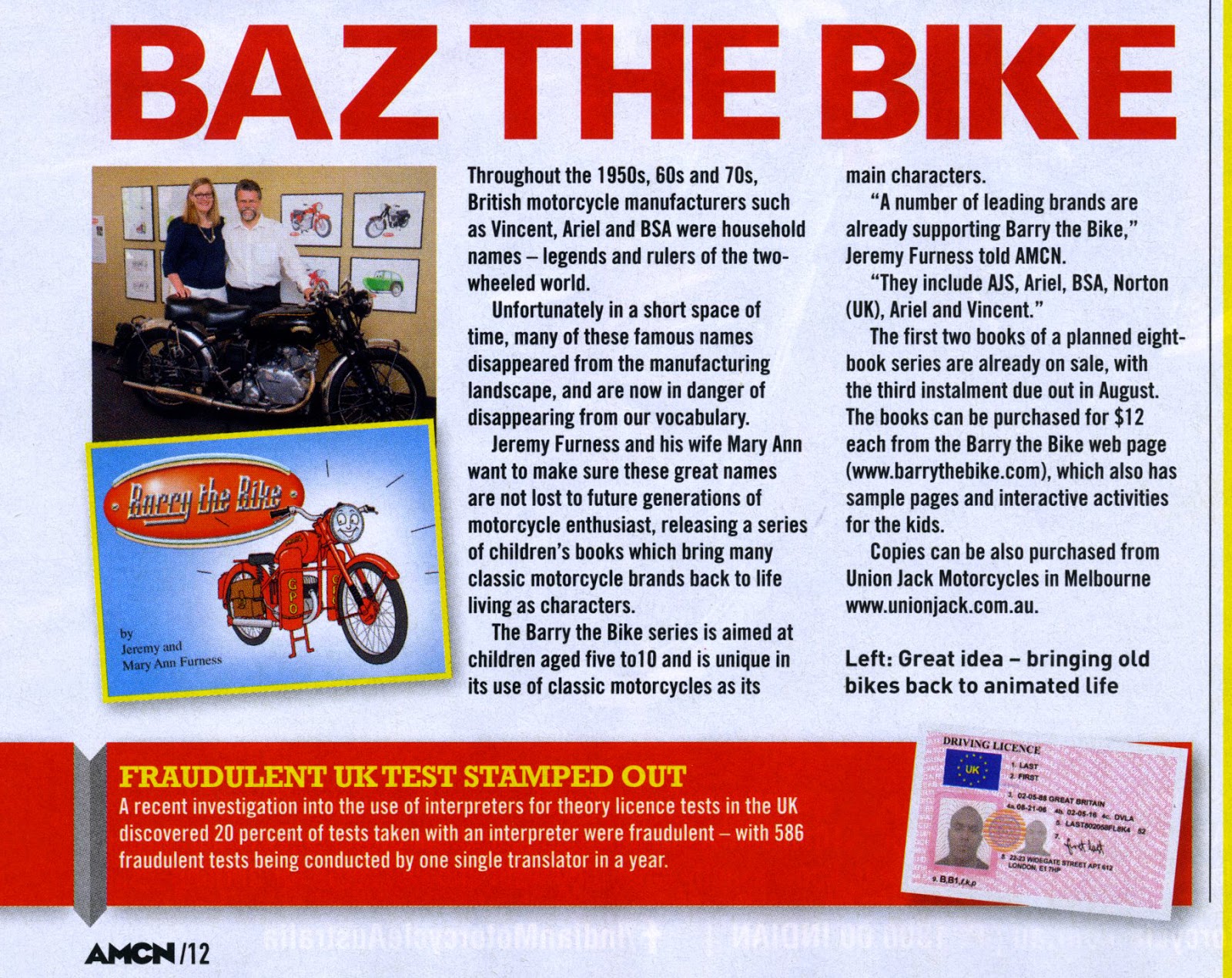 Posted by Damien Codognotto OAM at 17:52 No comments:

T A IS BACK

Television Sydney (TVS) is screening Series 1 again from Tuesday January 20 at 9.30pm and repeated Sat at 3.00pm and Sun at 11.30am.
Outside of Sydney it can be viewed online at www.tvs.org.au at the same times!

Posted by Damien Codognotto OAM at 17:39 No comments:

TOP TAC STATS BUT NO CIGAR FOR RIDERS

In spite of a significant and sustained reduction in motorcycle & scooter casualties, this video clip shows only a fleeting glimpse of a motorbike. If it's bad news riders are on the national news. If it's good news like a 33% reduction in fatal crashes over two years, it's buried.

After all the propaganda telling car drivers that riders are either violent criminals or suicidal maniacs, you'd reckon the taxpayer funded government agencies would be very public in saying well done and pointing out the benefits safe riding bring to other road users and the community in general.

Want to send a message to governments and car drivers, be at the RIDE TO WORK BREAKFAST on March 16.

If these links don't work try Rod's post at: 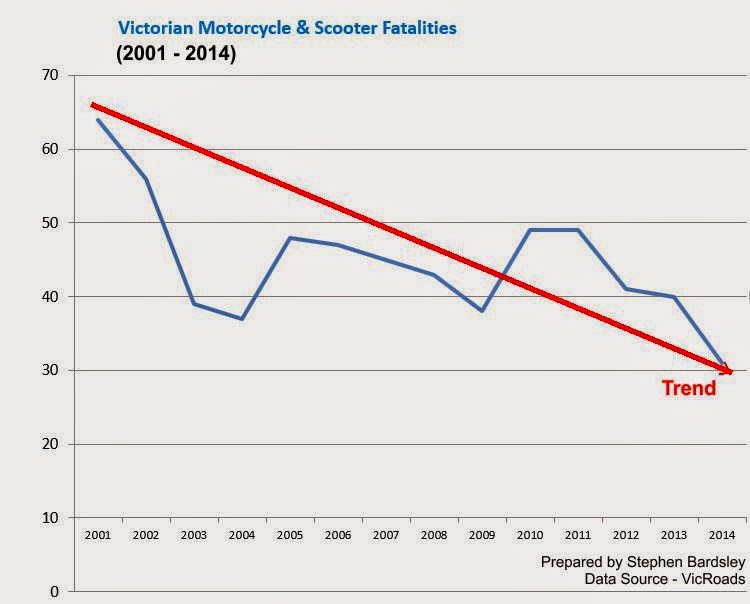 www.independentridersgroup.com
Posted by Damien Codognotto OAM at 13:03 No comments:

Posted by Damien Codognotto OAM at 18:49 No comments: 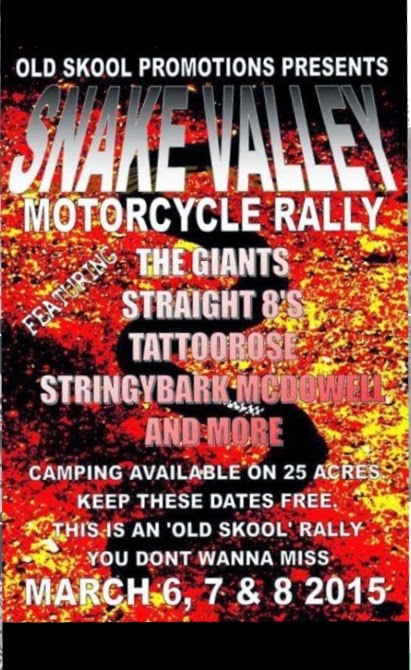 Posted by Damien Codognotto OAM at 12:38 No comments:


http://www.mailtimes.com.au/story/2809526/horsham-overpass-crash-chopper-helps-police-track-motorbike/?cs=225
Posted by Damien Codognotto OAM at 12:36 No comments:

RIDE TO WORK BREAKFAST IN MARCH

THE INDEPENDENT RIDERS GROUP will run the first RIDE TO WORK BREAKFAST at the Queen Victoria Market in Melbourne on Monday, March 16, 2015 from 7 am to 9 am.

The aim is to promote safe motorcycle and scooter commuting.
Protective clothing, machine maintenance and driver awareness. And, to generate good publicity for riders. We would like to make it an annual event.

TAC are a sponsor and will donate a gold coin to the Father Bob Foundation for every rider who turns up in full safety gear.

All welcome. No event fees or registration. Just turn up for 5 minutes or 2 hours.

Speeches and raffle draw at 8 am. 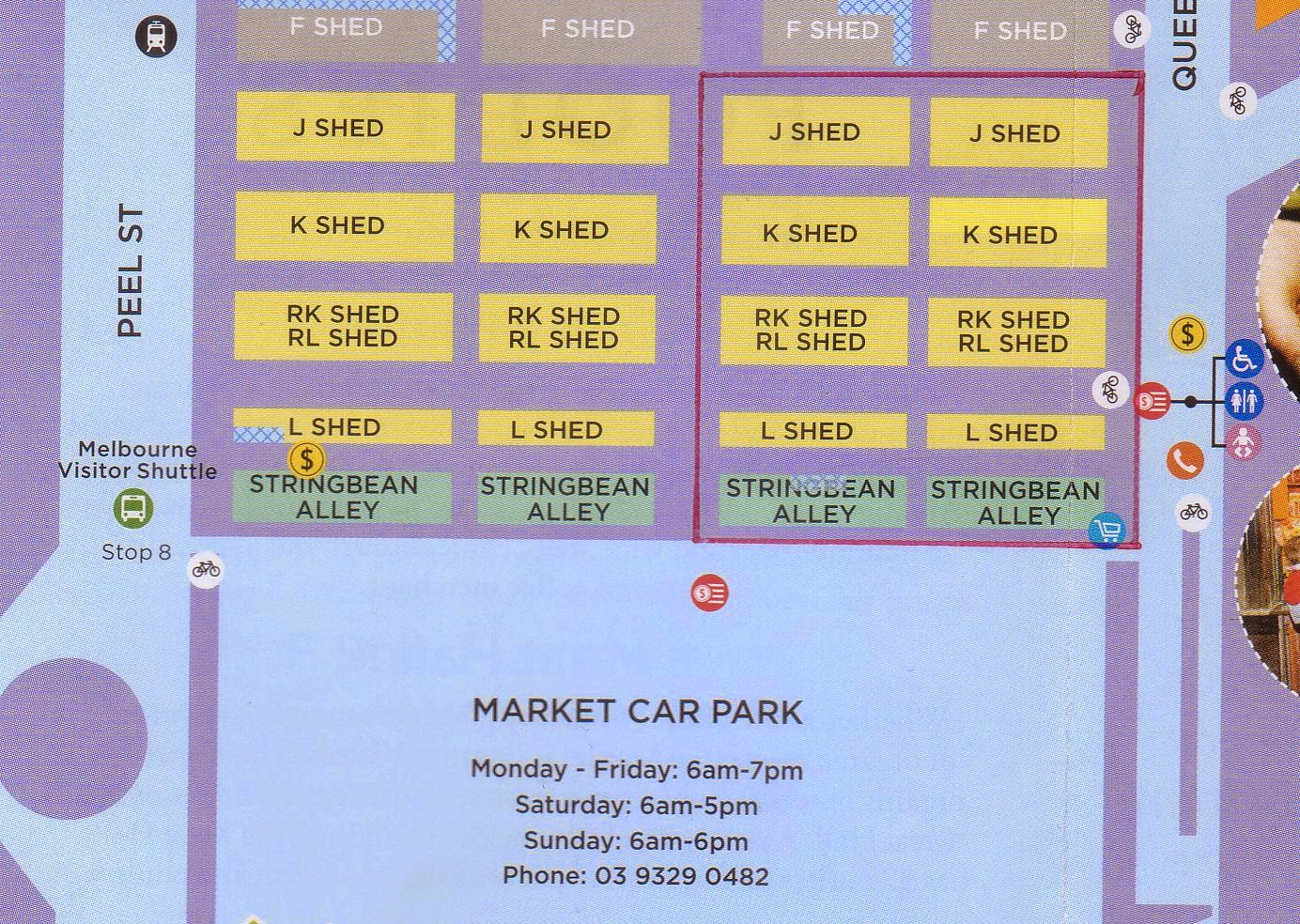 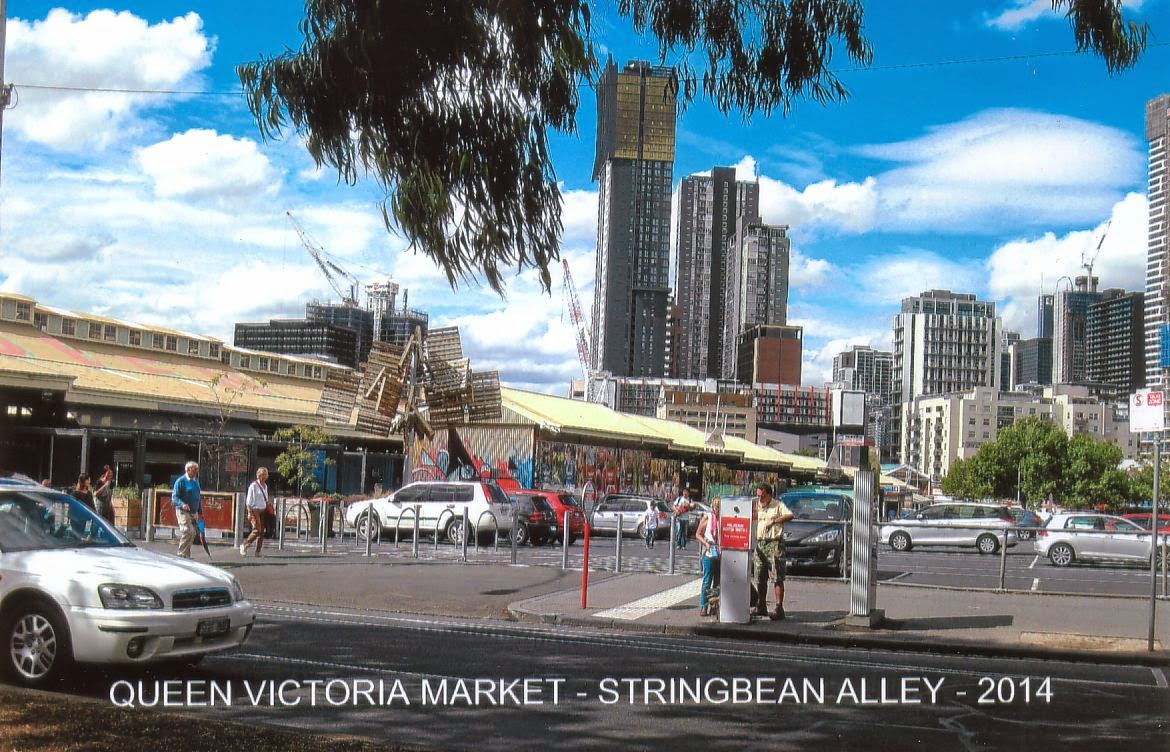 We need businesses to take stands and someone to do snags in buns and bacon & egg rolls etc. for the breakfast.

Please pass this notice on.

Contact:  d.codognotto.oam@blogspot.com
Posted by Damien Codognotto OAM at 14:47 No comments:

BILL KAYLOCK'S TOY RUN EMAIL has generated a lot of discussion on facebook including an offer from the Victorian Motorcycle Council (VMC) to merge the IRG TOY RUN for Father Bob and The Calder TOY RUN. Lots of old Melbourne TOY RUN pix.

Independent Riders Group member Bill Kaylock now lives in Europe. He's is home for a visit and sent me this email. I agree with him, especially about the TOY RUN.


I read all of your emails and as I am in Australia at the moment I am aware of the current situation for motorcycling , especially in Melbourne.

A couple of observations.

It seems that motorcycling has lost much ground recently. The raising of the age for learners to 18 , the flouro vest law,  the banning of tinted visors. I could go on. 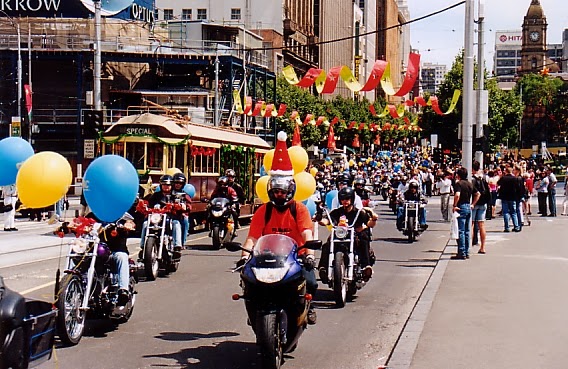 And , perhaps I am alone in this view , the Toy Run has progressively moved away from the city, now ending at Calder. I always thought of it as an opportunity to promote motorcycling as well as assist charity. Without the sight of 1,000s of motorcycles converging on the city I feel it misses a great opportunity, (similar to the GP run starting in


Meanwhile I shall revel in the joy of riding a motorcycle in Europe.

Posted by Damien Codognotto OAM at 19:12 No comments: