This newspaper item does not mention us and it's my opinion that we can't expect any support from the RACV.

Posted by Damien Codognotto OAM at 19:24 No comments:

The terrible crash on Melbourne's Ring Road this week requires a look at the way our society copes with youth on wheels.

Enforcing hoon laws with more uniform police is not the whole answer. At best, enforcement reduces hooning. At worst road authorities use hoon laws to be seen doing something. The later means isolated enforcement, youths singled out, examples made. Resentment of police increases.

Police and community attitudes to young people, their energy and curiosity, are part of our hoon problem. It's a sympton of an ageing population. Restrict, control, learn from me, when I was your age ... and so on.

Change the culture back to service from control in road authorities. Put driver/rider education in schools with a career path for road user educators. A teacher goes to uni to teach kids to kick, swing, swim, jump or run, but just about anyone can teach a kid to drive/ride.

Use facilities and build more. We have drive/ride facilties that lie idle a lot while millions are spent on bicycle paths and skateboard parks. Circuits at Sandown, Calder, Broadford, Winton and Phillip Island are available for much of the year. Spend tax dollars on drive/ride days and help grass roots motoring clubs with costs so young drivers and riders are mentored by people they respect, the way it was.

Involve  Police/Vicroads/TAC staff interacting with young people. Combine motor sport and education. Break down the barriers between young and old, old and young. 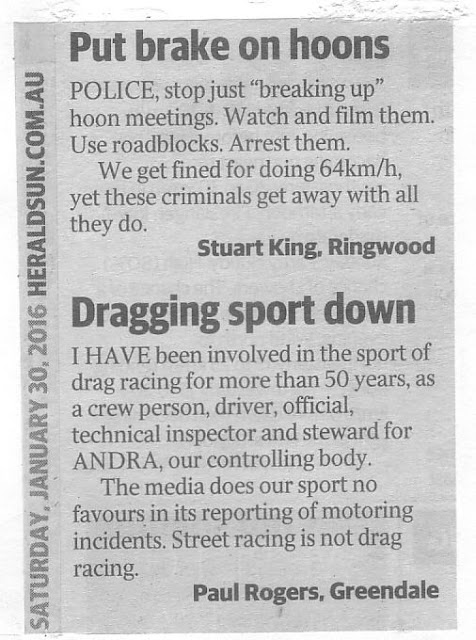 Posted by Damien Codognotto OAM at 19:16 No comments:

Were the motorcycles involved in the Norlane hit & run registered? Were the operators licenced? Or were they unriders who have nothing to do with road riders?

From the police media unit report the average reader could form the opinion that these were irresponsible, dangerous road riders. This vilifies of a whole class of road user, the vast majority of  who are responsible, law-abiding citizens who pay their road taxes.

Victoria's 326,000 plus licence holders are NOT unriders. It behoves the Victoria Police Media Unit to make the public aware of the difference. Not to do so is negative to road safety.

Posted by Damien Codognotto OAM at 14:39 No comments: 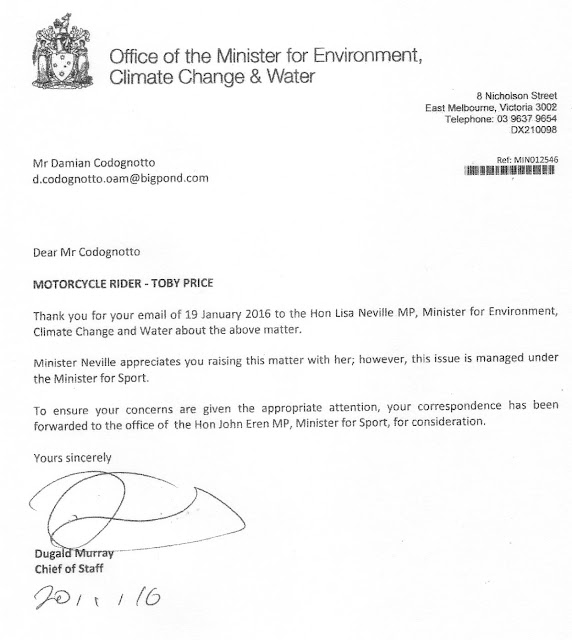 Damien
IRG
Posted by Damien Codognotto OAM at 13:21 No comments:

RECEPTION FOR TOBY PRICE IN MELBOURNE????

May I suggest that the Government and the people of Victoria get the opportunity to show how proud we all are of Toby winning the "World's toughest off-road race", by giving him a warm reception in his honour held in Queen's Hall, Parliament House.

In 1997 I was invited to attended a similar reception for Michael Doohan,world 500cc motorcycle champion.This event was a great success and well represented by the motorcycle community and covered by the print and screen media. Motorcycles were displayed on the bottom and top steps of Parliament House. (see attached invitation).

This man has represented Australia so well on the world stage deserves recognition in the highest order!

Please Note: The same people that organised motorcycle riders in 1997 to  Michael Doohan's reception are still around and I am certain can assist you when called upon.

If you think this is a good idea, email the Premier at:  daniel.andrews@parliament.vic.gov.au
We are ready to do it again for this Aussie Champion. 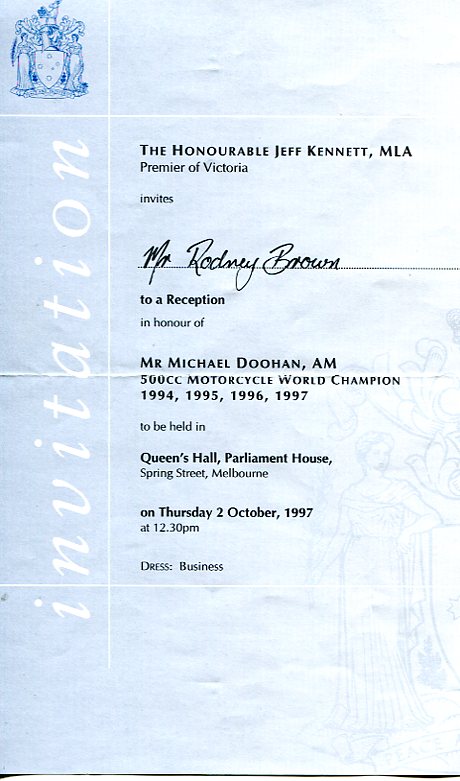 Posted by Damien Codognotto OAM at 21:12 No comments:

WRB LETTER TO THE HERALD SUN 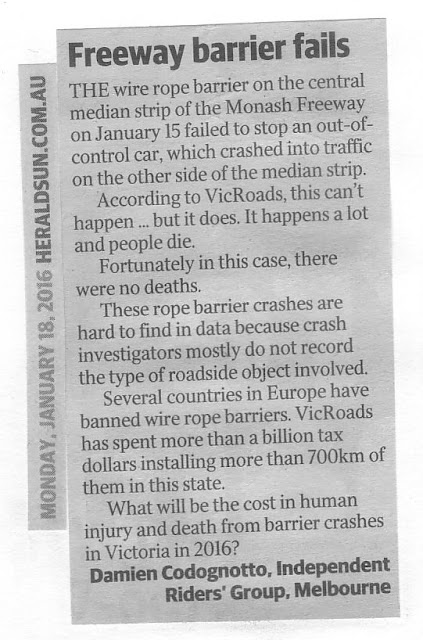 Posted by Damien Codognotto OAM at 20:49 No comments:

WRB LETTER TO THE EDITOR

The wire rope barrier on the central median strip of the Monash Freeway in Melbourne failed to stop an out-of-control car this week. At 6.30 am a car hit the WRB, went over it and crashed into oncoming traffic.

According to road authorities this can't happen. But it does. It happens a lot and people die. Near Ballarat on the Western Highway, two dead. It happened at Pyalong near Bendigo, four dead. Fortunately, in this Melbourne case speeds were low and there no deaths.

These WRB crashes are hard to find in crash data because investigators mostly don't record the type of barrier involved or the exact location. Safety research on WRB crashes in the wide range of Australian conditions is almost non-existent. This lack of road safety data has been documented in more than one Parliamentary Inquiry. Several countries in Europe have banned WRB.

VicRoads has spent over a billion tax dollars installing more than 700 kms of WRB in this State and it plans to double that.

Commuter traffic inbound on the Monash came to a virtual stand still. The road was all but closed for an hour and a half during the morning rush. A nightmare for any large city. What did that cost? And, what will
be the cost in human injury and death from WRB crashes in 2016?

To VICTORIAN MEMBERS OF PARLIAMENT

A wire rope barrier has failed to stop a car again. This time the
failure wasn't fatal. It did cause injury and disrupted a major
Melbourne freeway during peak period traffic at 6.30 am. Inbound
traffic virtually stopped for an hour and a half. What did that cost?

The Independent Riders Group calls on VicRoads and other road
authorities to stop installing wire rope barrier until real research
on Victorian wire rope barrier crashes in Australia's wide range of
conditions and with all types of vehicles has been completed,
including crashes involving motorcycle, scooter and bicycle riders.

VicRoads has installed some 700 kms of WRB At a cost to taxpayers of
over a billion dollars and they plan to double this!. Not even 5% of the
tax dollars spent has been on real research to get facts on what happens
to humans involved in WRB crashes.

The Independent Riders Group calls on the Victoria Police crash
investigation unit to include comprehensive data on road barriers
involved in crashes so injury data can be assessed with regard to the
type of barrier involved in the crash. The lack of reliable crash
data on road barriers has been documented in more than one Victorian
Parliamentary Inquiry, including the 2005 Inquiry Into Crashes
Involving Roadside Objects.

The Independent Riders Group calls on the Victorian Auditor General
to audit the real cost of wire rope barriers compared to other
barrier types, including installation/maintenance/repair costs and
working life and replacement costs. 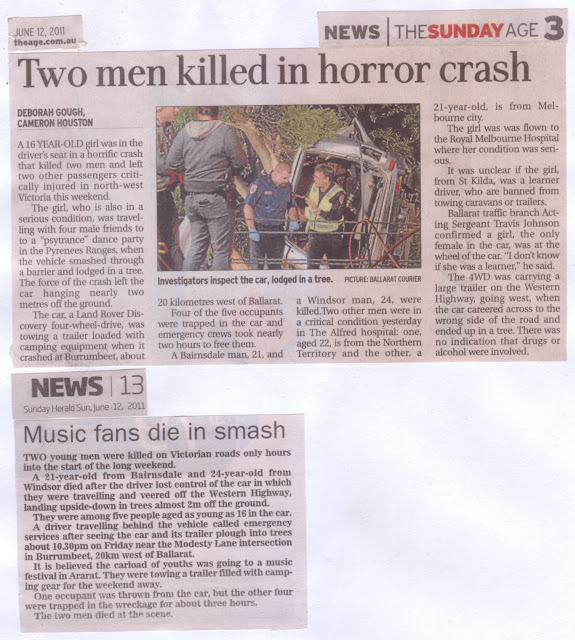 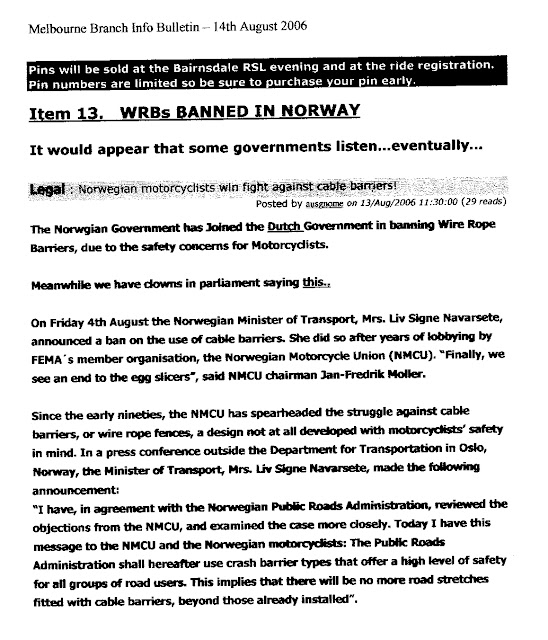 Posted by Damien Codognotto OAM at 19:20 No comments:

Did you see the stop lines story on my website has received a lot of response and even been picked up internationally:

http://motorbikewriter.com/separate-stop-lines-for-motorbikes/
I thought I’d also point out that I’ve been covering the Dakar since the preview on Toby back in December and have daily updates on his progress:

NO HANDS NO RESPONSIBILITY

This is probably the most effective way to dumb down the driving task, reduce driver skills, reduce operator accountability and sell product yet seen. What happens when the computer goes haywire? 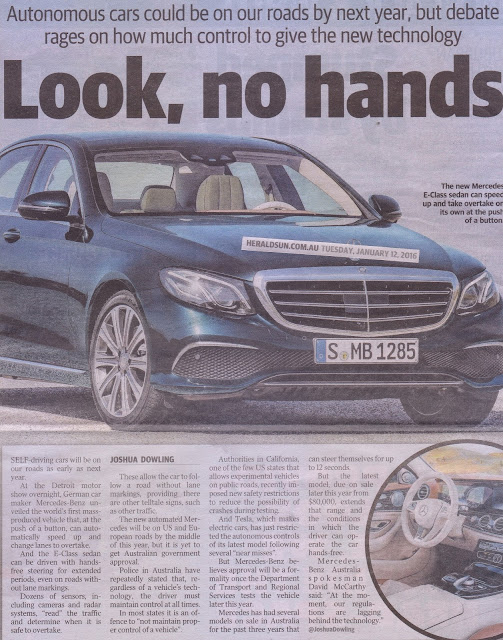 Posted by Damien Codognotto OAM at 22:44 No comments: 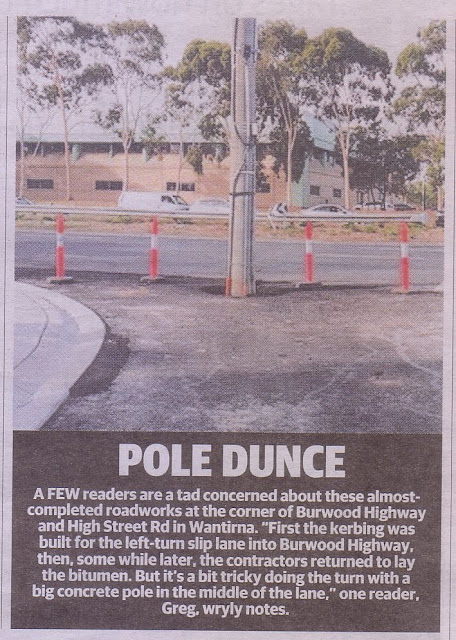 Posted by Damien Codognotto OAM at 22:40 No comments: 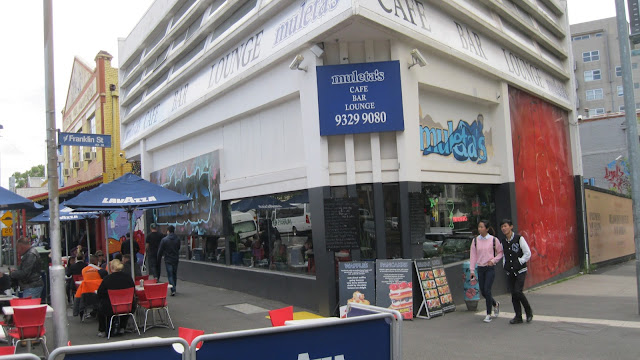 The first INDEPENDENT RIDERS' GROUP Saturday morning coffee will be on Saturday, January 23, 2016. 10 am to noonish. At Muleta's on the corner of Franklin and Queen Street in Melbourne. It's just across from the famous Queen Victoria Market so attendees can have breakfast and do a bit of shopping while meeting other IRG members and their friends. If you're in range, please try to make it. You don't have to be a member. All welcome. 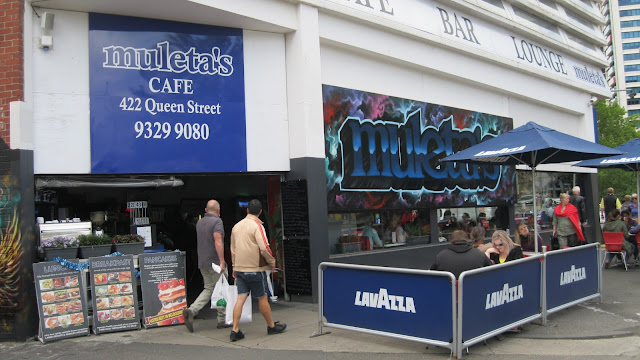 Posted by Damien Codognotto OAM at 20:03 No comments:

This is a good cause. Please support it if you can.

The acclaimed new film from Sue Brooks, multi award-winning director of Japanese Story and Road to Nhill, LOOKING FOR GRACE is an intimate, funny and profoundly moving story about chance, fate and the complexity of family life.
When rebellious 16-year-old Grace, takes off, her exasperated mum and dad enlist the help of the close-to-retirement detective and begin the long drive from out to the west Australian wheat belt to try to find her. On the journey the two must confront the realities of their changing relationship to one another, and to their daughter…
Wry, intriguing and poignant, Brooks’ unflinching reflection on the disruptive effects of both adolescents and middle-aged boasts her trademark sense of character, acerbic humour and eye for the hypnotic rhythms of the Australian landscape. Innovatively structured to incrementally reveal each character’s journey - and secrets - from numerous vantage points.
LOOKING FOR GRACE is ultimately a beautiful, bold and unmistakably Australian story that reminds us that life is precious, and can change in the blink of an eye.
LOOKING FOR GRACE was proudly the only Australian film featured at the Venice International Film Festival in September, 2015.
Meet Sue Brooks the director/writer at the showing!


Or cash to Val Harrison, Jenny Jones or other CF Nightingales
Posted by Damien Codognotto OAM at 15:43 No comments:

http://mypolice.qld.gov.au/blog/2015/09/25/first-female-motorcyclists-hit-the-road/
Posted by Damien Codognotto OAM at 20:56 No comments:

Victoria Police train their first female motorcycle cop. It happened some time ago but got little publicity. Hopefully other women will apply to join the solo unit. It seems to me that one of the deterants for female and smaller officers joining the VicPol solo unit has been the big beemers they would have to use. That deterant may have been reduced with the introduction of mid-sized police bikes to tackle Melbourne's chronic traffic congestion filtering where the big bikes can't. The next step should be bike patrols in pairs.
https://www.youtube.com/watch?v=MVnkZm49e70
Posted by Damien Codognotto OAM at 15:16 No comments:

GIVE BLOOD IT'S EASY

Please try to give blood in January 2016.

https://www.donateblood.com.au/make-appointment?gclid=CMLNsrKpjMoCFQslvQod3csNpg
Posted by Damien Codognotto OAM at 15:55 No comments: