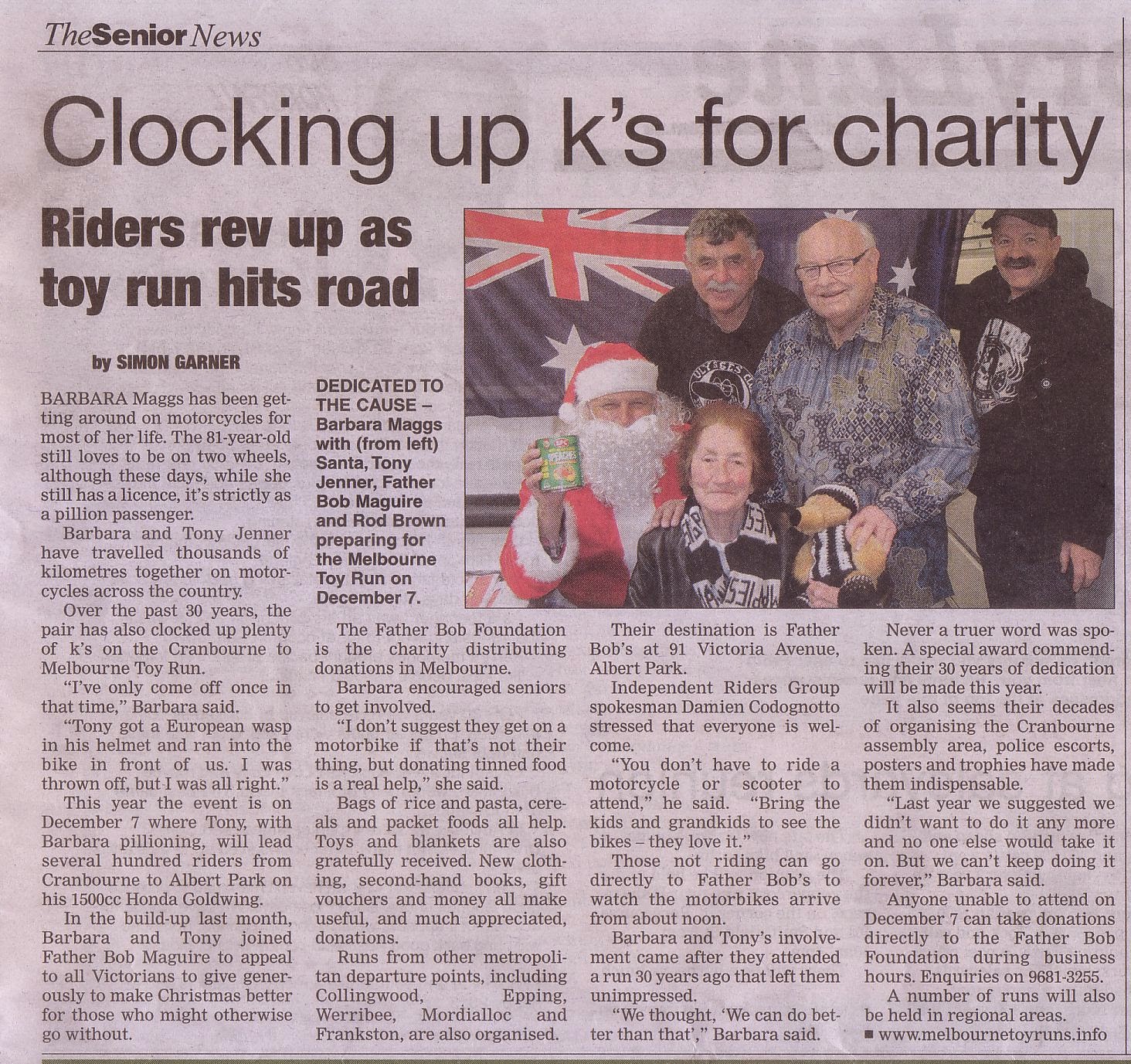 The Senior above. The Port Phillip Leader below.

Posted by Damien Codognotto OAM at 22:21 No comments:

We go riding in the Perth Hills and Jonesy checks out a Barbarian for his shed.We meet up in Hobart with Yogi and find out about his charity work. The Diggers Military Motorcycle Club show us their clubhouse in Robertson, we find out why Victory and Indian need more space in Brisbane and why riders need legal help to fight unfair laws. Hirsty checks out the Grey Gum Cafe on the Putty Road, we find out what's great in Victoria for sports bikes and ask what riders think of the Western Australia's 'Dob in a Bikie' Campaign.

Check you local Guides for other repeats and variations during each week or check out recent episodes on Tenplay http://tenplay.com.au/channel-one/temporary-australians

MOTORCYCLE TRADER IS OUT TODAY (Nov. 27, 2014) WITH TOY RUN DETAILS
Posted by Damien Codognotto OAM at 15:30 No comments:

MELBOURNE'S HERALD SUN newspaper did some digging via FoI requests and came up with some facts about crime in Victoria. The crime rate has doubled and even tripled in some post codes.

MOTORCYCLE TRADER MAGAZINE did some more digging and found that with all this crime about the Victoria Police attribute just 0.36% to motorcyclists.

Damien
IRG
Posted by Damien Codognotto OAM at 18:35 No comments:

https://www.youtube.com/watch?v=OBXRyWeib6o
Posted by Damien Codognotto OAM at 16:53 No comments:

DON'T WASTE YOUR VOTE IN VIC ON NOV 29

Posted by Damien Codognotto OAM at 14:16 No comments:

ENGLISH MOTORCYCLISTS are protesting against wire rope barriers (WRB) being installed on the A11 motorway. They point out that WRB has not been tested with motorcycle safety in mind and that some countries have banned WRB.

I point out that road authorities have massive investments in WRB so it may not be in their interests to do any real testing of these products.

I just put in my postal vote papers for the Victorian election on November 29.

I'll be on my way to Canberra for the LAST STAND PROTEST RIDE on Monday, December 1.

This Victorian election is particularly important as various Australian Governments introduce and/or plan more antibike laws in the name of keeping us safe from evil doers. So this time I'm voting solely on motorcycle issues. There are plenty of good people voting on health, education, "nation building projects", and so on.

These antibike laws will effect other Australians so I'm studying the form. I'll look at all the candidates and what they stand for. Usually you get a run down in the local paper and there are websites. My Lower House electorate is BOX HILL. My Upper House electorate is Eastern Metropolitan.

Attorney General Robert Clark MP is pushing VLAD type laws for Victoria and the propaganda is already in the media about Victoria becoming the bikie state. Clark is a safe candidate for BOX HILL but he won't be getting my vote.


The Upper House is going to take a bit more thinking about.

One thing is sure. Premier Napthine has let the 175,000 Victorians who are licenced to ride down badly over the last four years. When he wanted into office he promised in writing and on TV to scrap the discriminatory TAC tax. He utterly failed to introduce even a significant part of the 64 recommendations from the 2012 Parliamentary Inquiry. In spite of the successful Hoddle Street bus lane trial he let VicRoads stall that road safety move right up to this election.

James Holgate from VicRoads gave Minister, Terry Mulder MP, bad information on traffic filtering which Mulder promptly blurted to the media. Three dead filtering? Rubbish. Napthine did nothing about it.

And the "advisor" to Mulder, Dr Alexandra Douglas promoted a lights-on law for this state so learners could not switch their headlights off. She did not even know that motorbikes have not been sold with light switches in OZ for 20 years! This kind of road safety advice to a Minister does not inspire confidence. Napthine did nothing.

We tried to meet with Napthine, Mulder and Clark repeatedly over the last four years but were ignored while political appointments to prop up sham consultation with the motorcycle community undermine the work legitimate rider representatives are doing.

I got a serious case of the irrits when I saw the following picture in the paper. Napthine on a scoot. The rider is probably out of shot trying to get the cutlery out of his/her back. If we want motorcycle safety to continue to improve and we want to protect our right to ride (at a reasonable cost), we have to get rid of this government and do something about the antimotorcycle hysteria running amok in VicRoads/TAC. 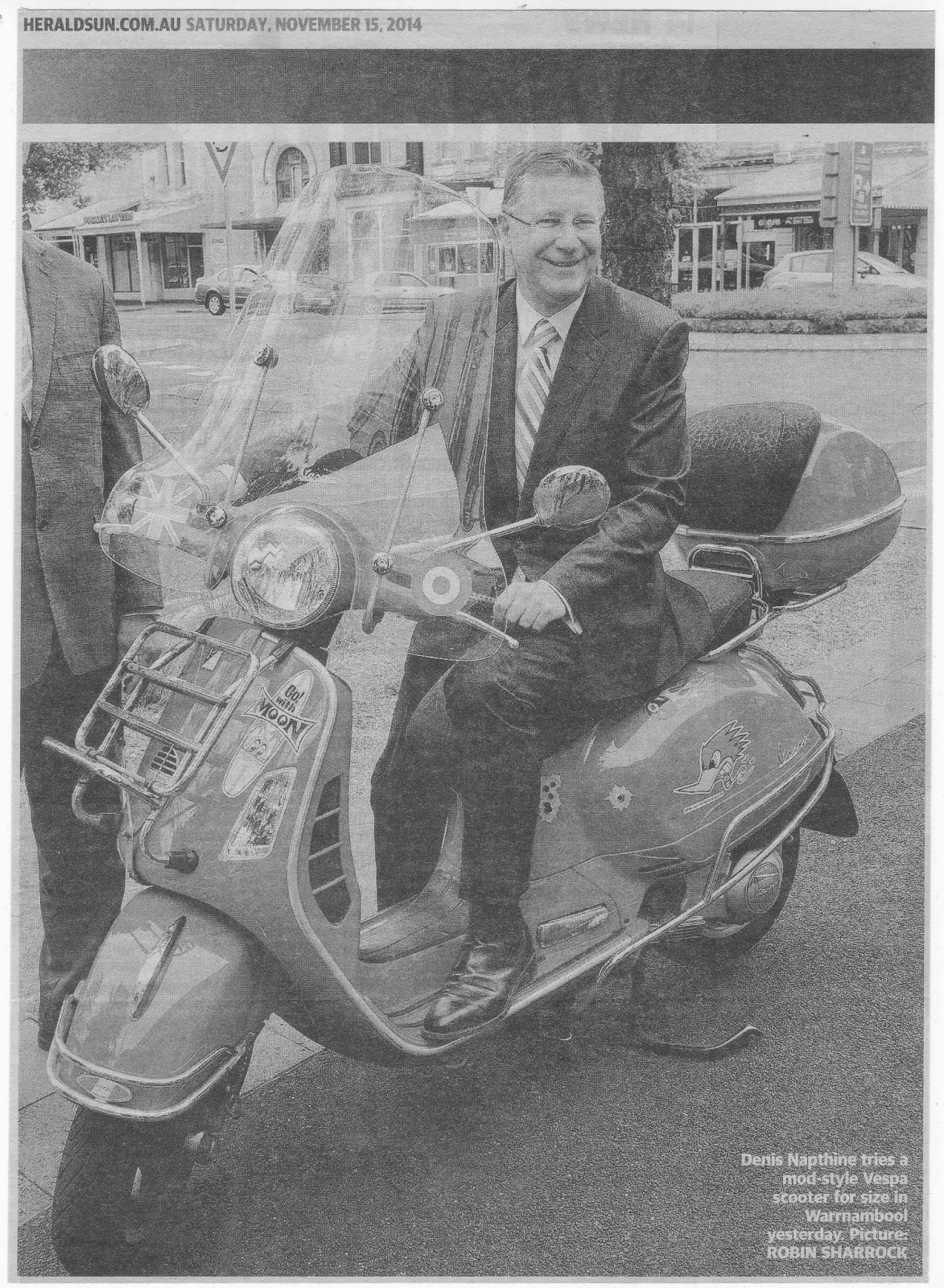 Damien
IRG
Posted by Damien Codognotto OAM at 22:49 No comments:

On Tuesday November 11 at 7pm Sydney time Ride discusses the imminent announcement of the High Court Decision concerning the Queensland Anti-rights laws and we revisit Barrister Wayne Baffsky's comments on the legal challenge and possible outcomes.

We look at Jack Millers reaction at coming in second in Moto 3.

We examine the Palmer United Party led Senate investigation into the alleged abuses of power by the Queensland Government.

We announce Episode 4 of Series 3 of Temporary Australians plus heaps more. 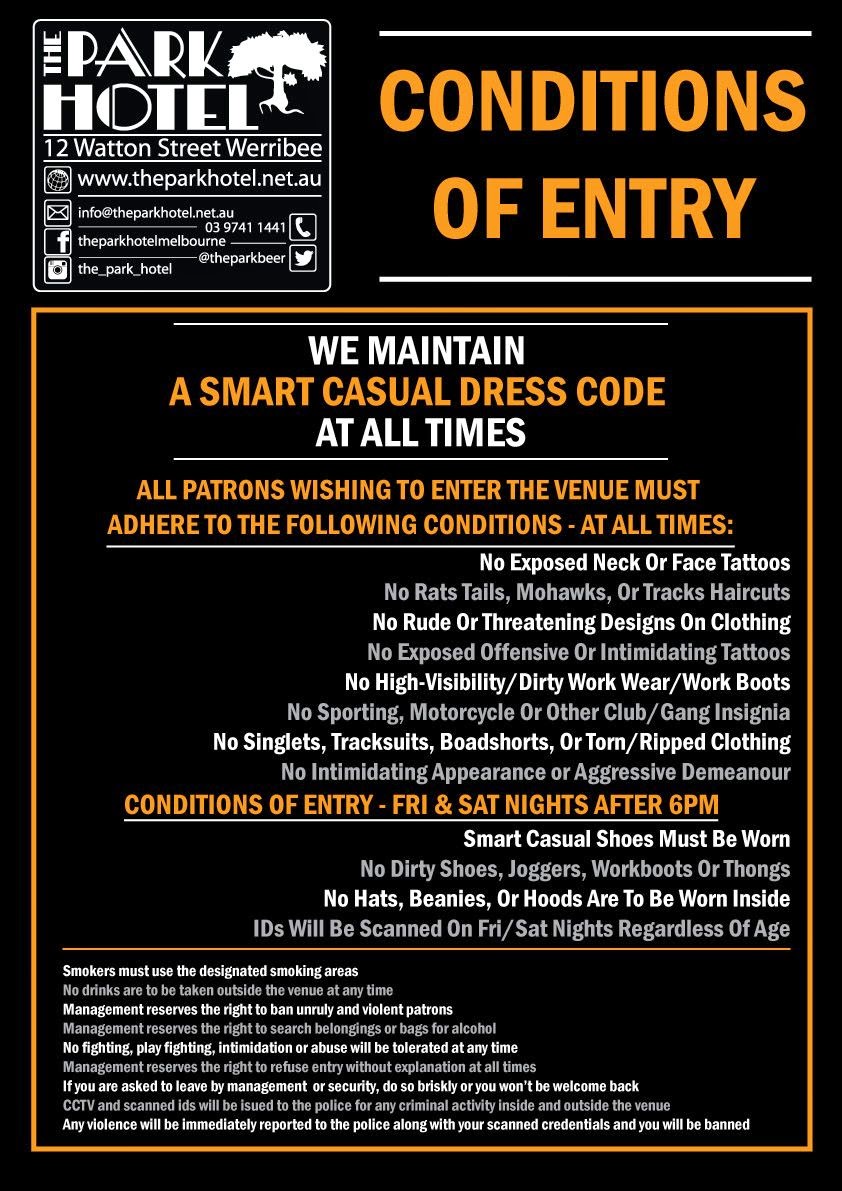 Even in a suit and tie with shiny shoes, I would not spend a penny in this establishment.

"No sporting, motorcycle or other club or gang insignia"

Damien
Posted by Damien Codognotto OAM at 17:16 No comments: 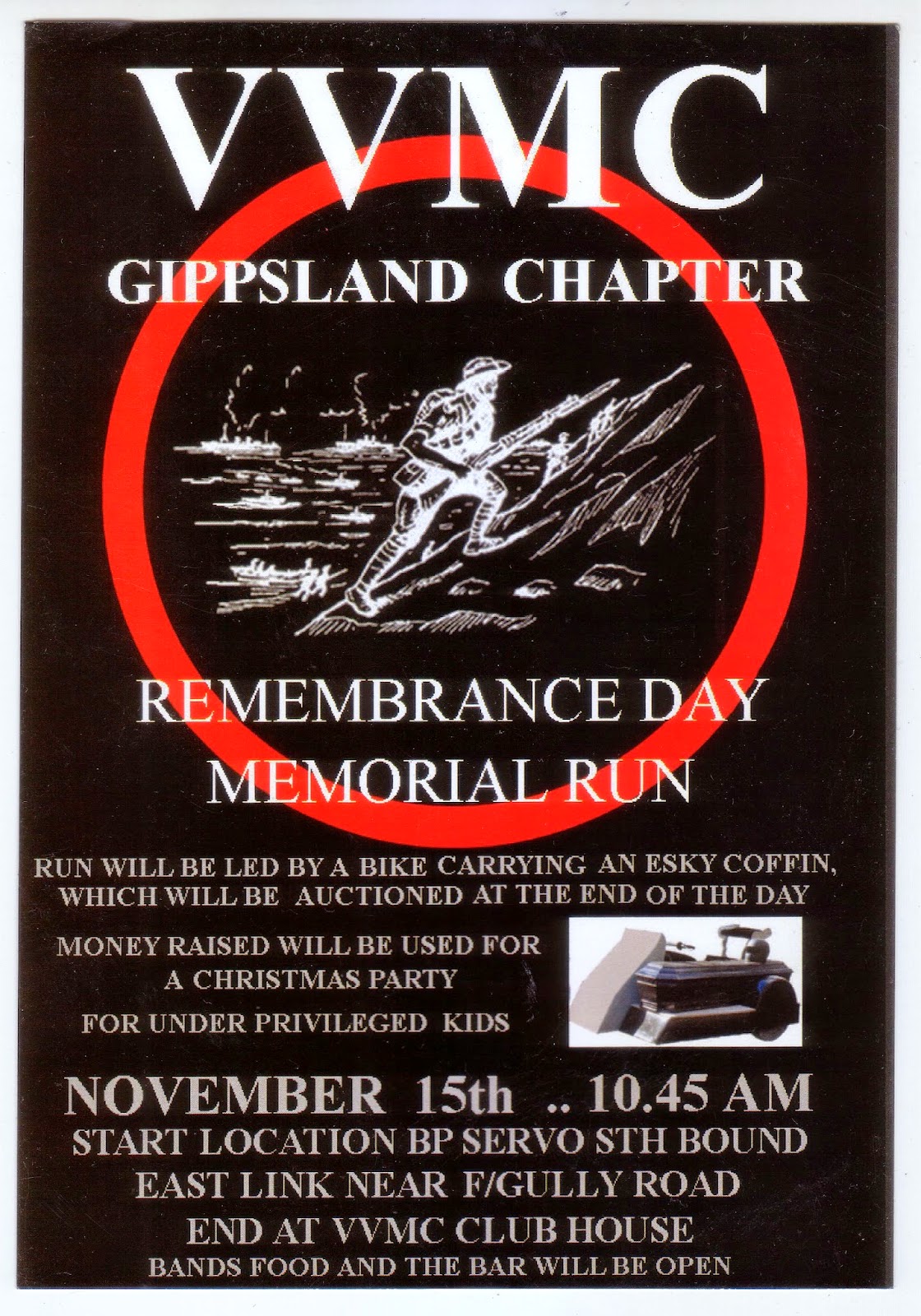 Posted by Damien Codognotto OAM at 22:06 No comments:

https://m.youtube.com/watch?index=6&v=eqQBubilSXU&list=PL5689F28D60BFBF57
Posted by Damien Codognotto OAM at 13:17 No comments:

JENNY LEE put the band back together about a year ago. They will play a Sunday session at the Mordialloc Sports Club from 3 pm this Sunday, November 9. Free entry.

The club is on the beach side of the main street of Mordialloc.

The JLB played Melbourne TOY RUNs and many bike gigs in the 1980s. 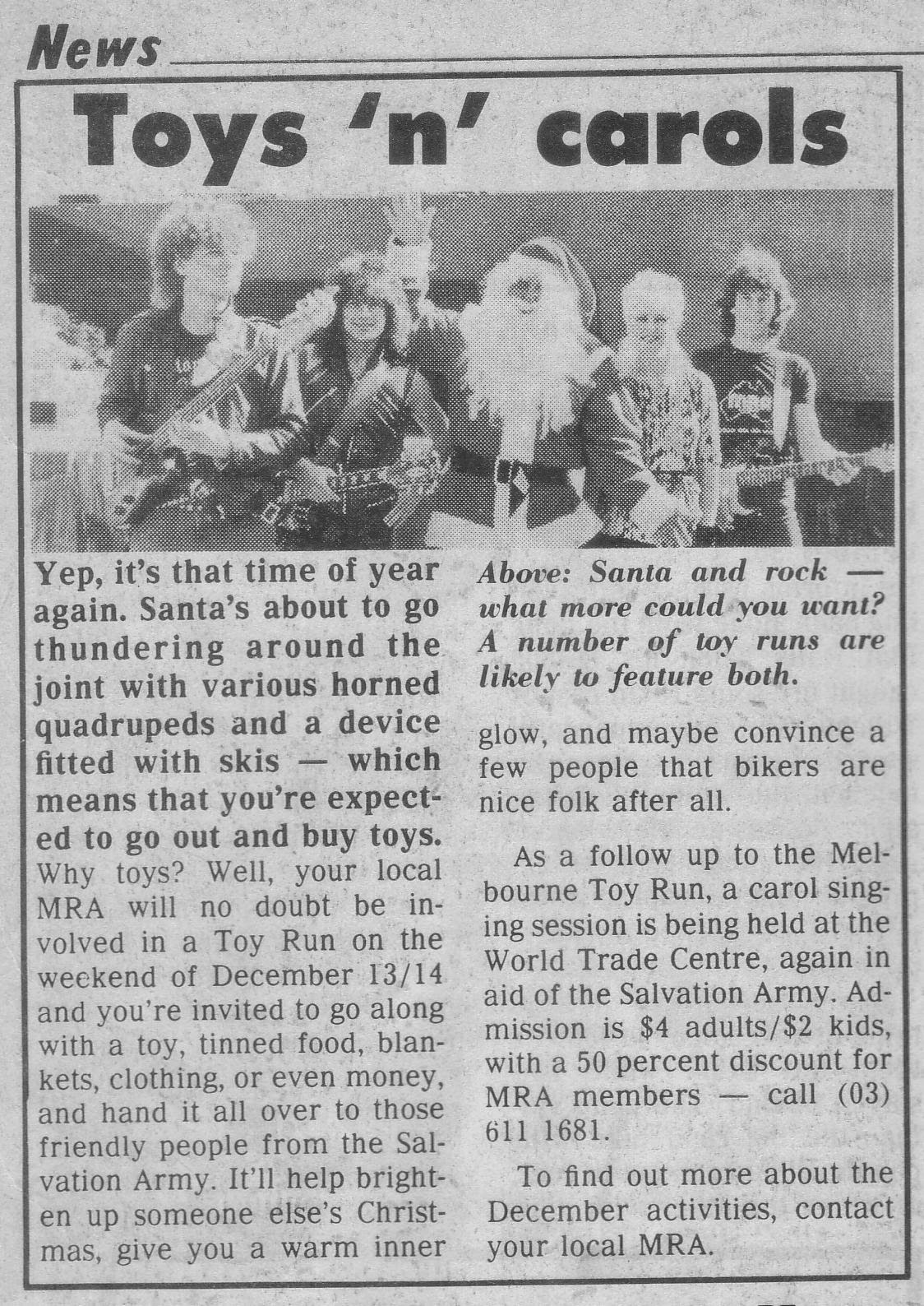 That's Jenny next to Santa in 1986. In 2014 the TOY RUN in Melbourne is for Father Bob on Sunday, December 7. Details on this link.

Posted by Damien Codognotto OAM at 21:35 No comments:

YOU CAN SEE  all the Independent Riders Group video newsletters at:


https://www.youtube.com/watch?v=TPt9yQJbclM
Posted by Damien Codognotto OAM at 22:16 No comments: 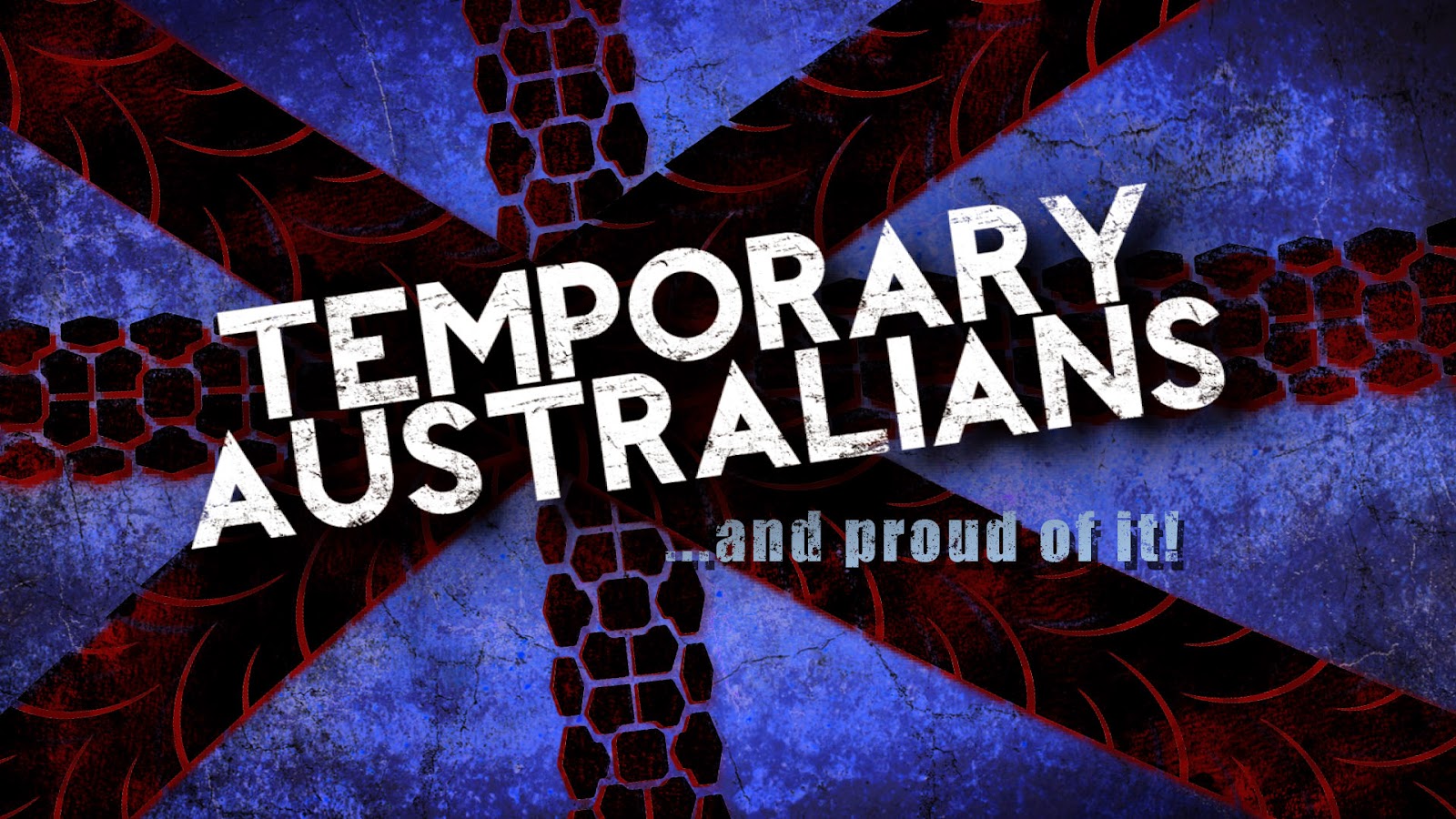 We check out the fun at the National HOG Rally in Cairns.

Hirsty spends a weekend at Bernie’s.

We meet up with Preacher in North Queensland and find out if surfers really do ride Harleys.

We take a look at how Cambridge Moto trains young riders off road in Hobart, discover a Tassie Titan who has international recognition and go for an awesome ride to Port Douglas.

Check you local Guides for other repeats and variations during each week.


Miss an episode of Temporary Australians Series 3? Then go to Tenplay and catch up:

Posted by Damien Codognotto OAM at 22:11 No comments:

To anyone who thinks police have a benign attitude to motorcyclists anywhere in OZ in 2014/15 I say, good luck. Check the link above.

In Victoria in 2014 police are pulling over "just about every bike they see". This harrasment is covered by a thinly disguised bike safety lecture, often given by a non-expert constable reading a script. It happened to me in January. See earlier blogs. It's been coming for years and facilitated by real terrorist threats, rider apathy and sellout bike reps.

Since then the Independent Riders Group (IRG) has had complaints about riders being pulled up for behaving in a completely legal way on a completely legal bike while cars whiz by. One bloke was stopped for nothing and finally given a ticket for an obscured number plate where about 2 mm of the tail of a Q was covered by the edge of the holder where the screw fitted!

Another Melbourne rider was pulled up for having a helmet camera. Bicyclists are encouraged not only to use helmet cameras but to present the footage as evidence against car drivers in court. Police it seems do not want motorcyclists filming what happens to them when a car driver does the wrong thing or when a non-expert constable reads from a script to show the passing public police in action.

Motorcyclists are bailed up by the road for all the drivers to see the police doing something about their fabricated bikie menace. Like I said, it was done to me.

In some cases when the riders does not please the officer a trivial charge is issued. The obscured number plate, mentioned above, is a favourite. It doesn't seem to matter if the plate is obscured.  The rider probably won't be able to afford the day off work and a lawyer so they let it slide. If a rider does decide to fight for a fair go, the police bring in the best they have in their legal department. They don't like to lose face to a bikie.

In spite of the 60 million tourist dollars the Phillip Island Moto GP bring to the state police blitzed the blue blazes out of touring riders.

With the warmer weather there will be more bikes on roads around the country and with Christmas coming up there are more events including lots of  TOY RUNs. The police media units will probably push antibike propaganda like the Crikey.com item from 2006 below. So, careful who you talk to at your next gathering of riders, it could be the start of your own personal police file. 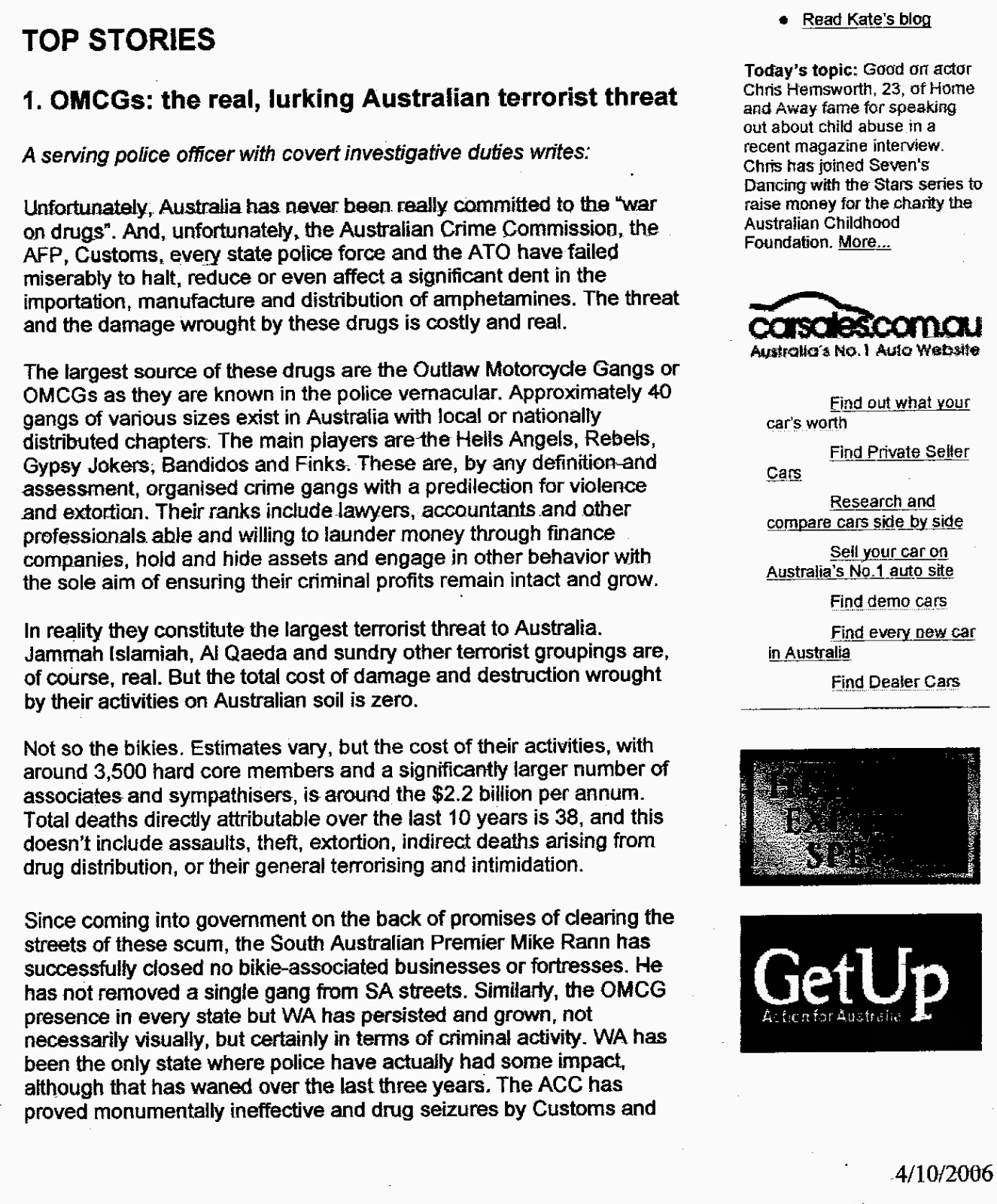 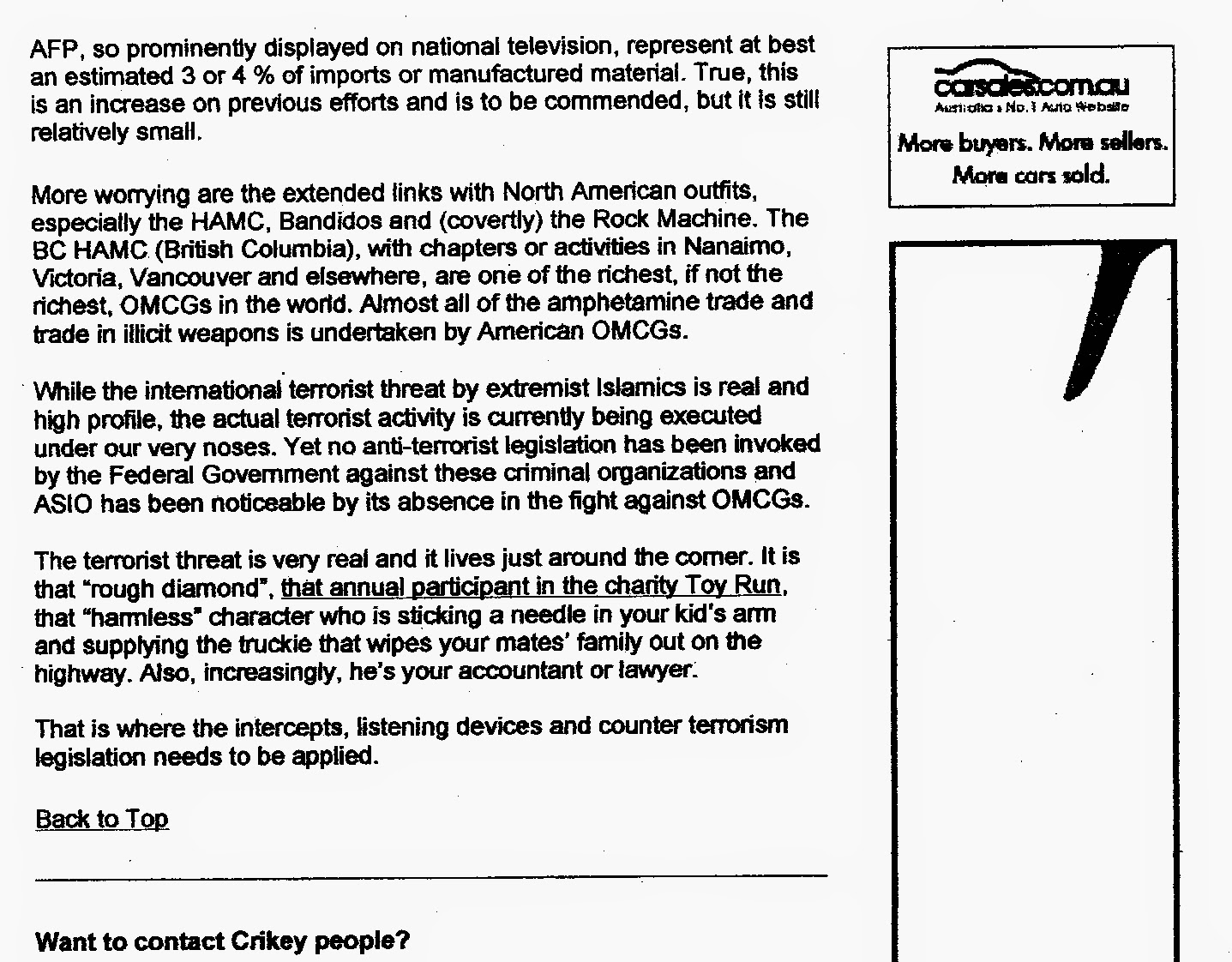 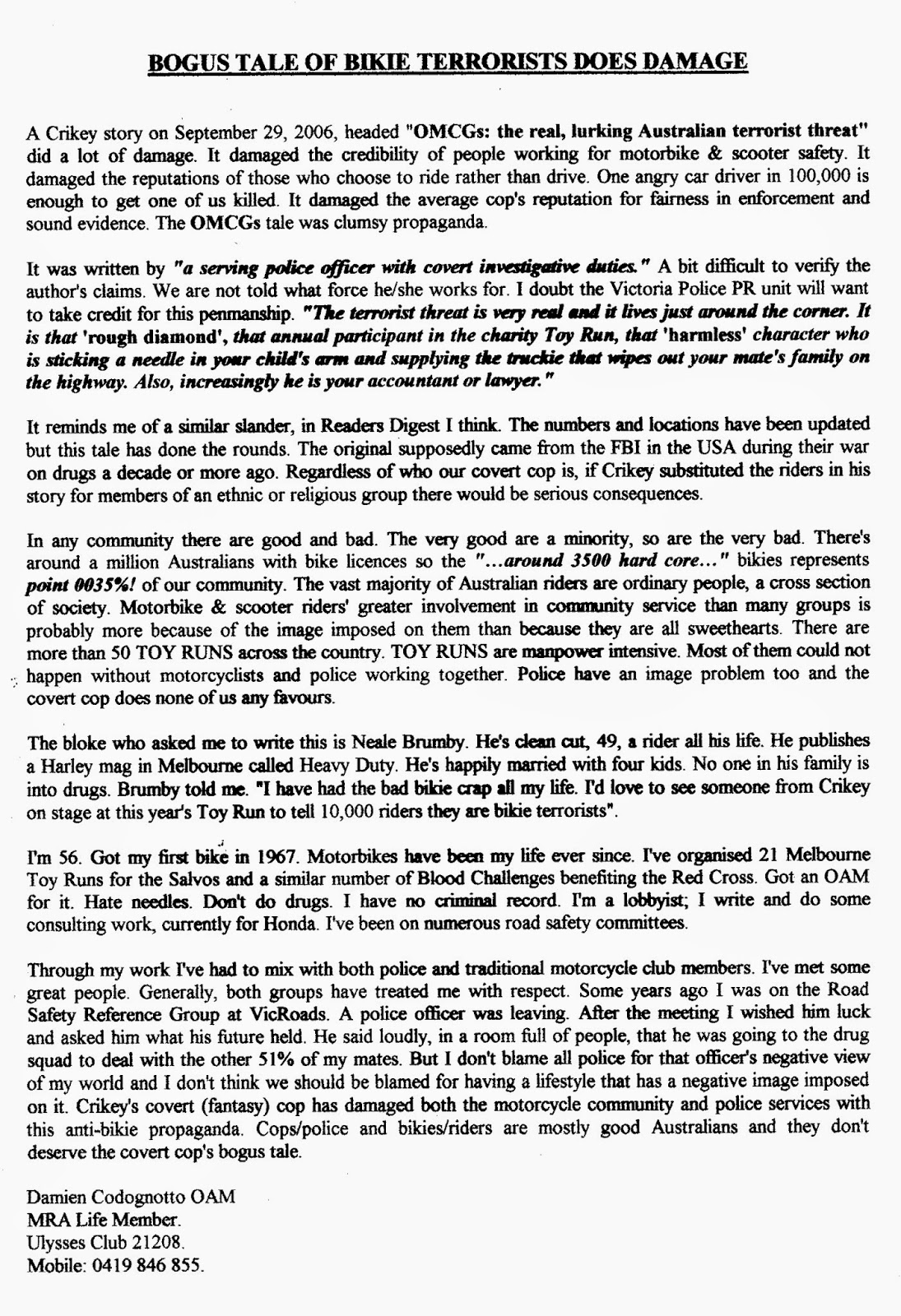 Posted by Damien Codognotto OAM at 14:50 No comments: