In 2009 I was carer for my parents and so somewhat out of touch with motorcycle & scooter politics. The government of the day quietly footpath parking laws for motorbikes in Victoria. Rider reps at that time did not do much. Perhaps they did not see the longer term effects of the parking law change. The change was subtle. The wording remained the same or similar but the game changed.

Put simply, in 1988 riders were allowed free footpath parking, with no time limit, as long as they did not block or hinder pedestrians. This was in after an 8000 bike MRA protest/park-in in 1986.

The system worked very well for around 20 years with few complaints. Few complaints about motorbikes on footpaths were in writing. Most were verbal from the big end of town. Every few years a corporate type or a developer would try to get motorcycles & scooters off Victorian footpaths. Each time rider reps successfully opposed these moves.

The 2009 law/policy change effectively took motorcycle & scooter footpath parking control away from state government and put it in the hands of local councils. This change did not happen overnight but I believe the change was calculated.


The signs, pictured above, were designed and made by the MRA in the 1980s. The artist Robin Redman. Lost track of her.
Anyway, from memory, in those days VicRoads (or the nearest equivalent), jealously guarded its’ right to approve all road signage. BUT, there were few motorcycle specific signs. Road surfaces, paint, tram tracks and road grooving, among other things, were considered hazards by riders. The MRA designed and produced 4 prototype signs. Two were left with VicRoads, two hang in my garage.
VicRoads had a fit. No one was allowed to design their own road signs, especially not bikies! it could be seen as legitimising motorcycling.

The grooving sign went nowhere but VicRoads produced a slippery-for-riders sign similar to the Redman design some time later. They never acknowledged the origin of “their” design.
What I put up on Facebook about the change in parking laws was, in hindsight, inadequate and possibly misleading but the effect of the law policy change happened. If a person did not know the background from the days of the Motorcycle Safety Forum in Victoria in the 1980s they may have been confused by the change claim when the Ministers letter claims the footpath parking rule just moved from one raft of legislation to another. There was more to it than that.
When the motorcycle footpath parking law was changed (read moved) in 2009 the VicRoads policy to strictly control signage councils could use was further relaxed.

Riders can't complain about the anti-motorcycle lobby doing long term damage to motorcycling when rider apathy is rife and when our reps proclaim their non-confrontationist policies as if that's something to be proud of. 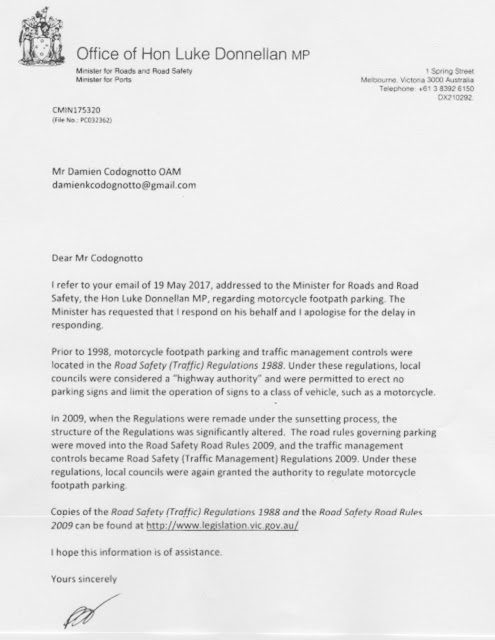 Posted by DAMIEN CODOGNOTTO OAM at 22:44