WHATEVER HAPPENED to the helmet camera issue in Victoria?

Max was riding to act as a volunteer marshal when he was pulled up by VicPol. Everything OK. He's a safe rider with a good record. But he had a camera on his helmet. The officer decided this made his helmet non standard and booked him for not wearing an approved hat.

This is one of the ways statistics get distorted and riders get to resent police.

Max decided to fight this injustice and Maurice Blackburn took the case.

Instead of withdrawing the ticket, VicPol Command prosecuted this heinous crime with vigour.

The Magistrate saw the cops' point of view.

The issue was raised at the Motorcycle Expert Advisory Panel (MEAP) at VicRoads, or VMAC as it was known previously, then we heard no more.

An Independent Riders Group member asked what had happened with the helmet camera law so I wrote to the Victorian Police Minister to find out.

I'll let you know when I get a reply. 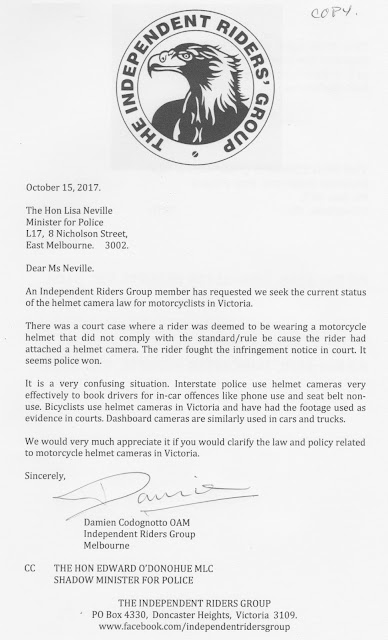 Posted by DAMIEN CODOGNOTTO OAM at 11:44