The Independent Riders' Group has lent its' name to the attached media
release  expressing  anger  at  the  Transport  Accident  Commission's
betrayal of the motorcycle & scooter community. 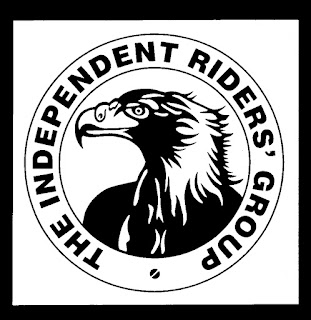 The  number  of  road  riders in Victoria has more than doubled in the
last  ten  years  to over 160,000 registered machines and over 300,000
licence  holders.  Injuries  and  deaths  from  bike crashes have been
reduced  over  25%.  These  Victorians have a right to ride. They more
than pay their way. They vote. There is an election in 2013.

The  TAC's  shock/horror  media  campaigns  do  not reduce road trauma
rather  they  promote  careless and/or aggressive driving by some road
users.

The  IRG  has written to Premier Baillieu calling on the Government to
ensure  that  TAC  reviews its' priorities and methods and changes the
make  up  of  the  TAC  Board  to  ensure a balance of road safety and
transport expertise with open administration.

The  IRG  condemns current South Australian Government move to rip
off legitimate road riders with a TAC style antibike tax that reportedly will
raise riding costs by $300 a year.

If  Victoria's four-wheel-drives were Targeted and  similarly taxed it would
raise some $56 million a year. That money could be spent on patrol police to
crack down on in-car offences not using seat belts and/or mobile phone use.
Such a tax would be seen for what it is, discriminatory. It would not be
tolerated by car organisations.

THE LETTER TO THE PREMIER

Dear Premier,
As  Victorians  tighten their belts in tough times and our
ambulance  crews  and  patrol  police  are  under-manned our Transport
Accident Commission (TAC) throws money away.

The latest shock anti-motorcycle TV ad is a disgrace. It is more about
TAC's image than motorcycle safety.

Aside  from  distressing  road trauma victims' loved ones, there is no
evidence  to  suggest  these  types of ad reduce casualty crashes. TAC
ignores  the fact that the majority of pedestrian, bicycle, motorcycle
and scooter injuries and deaths are caused by car driver error.

To  the  best of our knowledge TAC did not consult widely before going
ahead  with  this  ad.  Focus  groups  are  a  marketing tool not real
research.  this is about Victorian's lives, not selling a new brand of
biscuits.

The  TAC  is  a  monopoly with a compulsory product. It has no need of
a  glossy  corporate  image,  sporting sponsorships or expensive media
campaigns. Surplus funds from our vehicle insurance should be invested
in  better  rehabilitation  for crash victims, improving our ambulance
service,  reducing  premiums  for  safe drivers/riders and encouraging
environmentally-friendly vehicles.

The  Board  of  the  TAC  has  bankers  and  administrators but no one
experienced  or  qualified  in  transport  or  road  safety, let alone
motorcycle  and  scooter  safety.  We  have raised this matter with the
Minister  responsible  for  the  TAC and suggested suitable, qualified
people  for  the  TAC Board. When will this TAC imbalance be corrected
for the good of all Victorian road users? 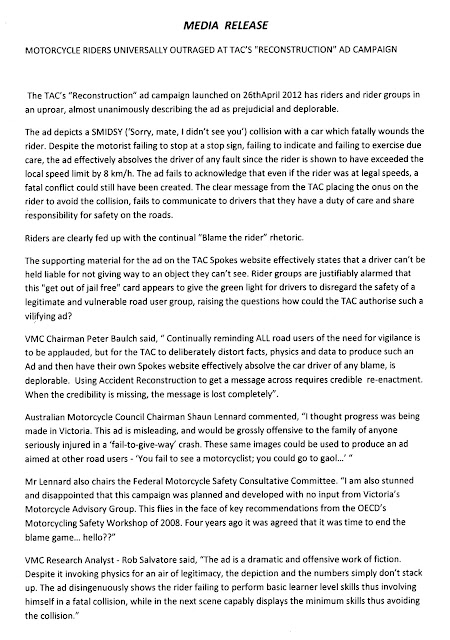 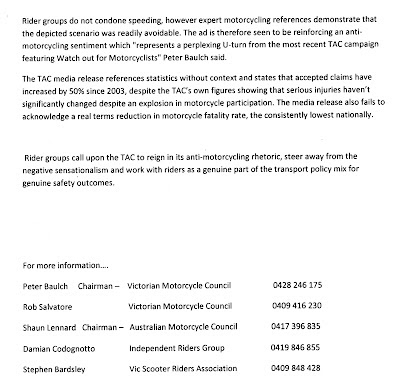 Posted by Damien Codognotto OAM at 16:35