WRITE TO YOUR MP.  JOIN THE IRG.

This letter has been sent, in one form or another, to all Victorian Members of Parliament and various newspapers. I urge you to email the Premier and the Leader of the Opposition in Victoria to let them know your feelings about the anti-bikie bill introduced to state parliament this week.

You can use my letter as you see fit or write your own and email it to:

The  Attorney  General's anti-bikie bill is like firing a shotgun at a
few  bad apples in a paddock full of good watermelons. Who will be hit
next?  Sporting  shooters?  Footy  clubs  with  a bad boy on the team?
Church or ethnic groups? This is a police-state law that will trap the
innocent but have little effect on serious crime.

The  Australian  Bureau of Statistics says 1.3 million Australians are
licenced  to  ride  motorcycles  &  scooters.  The  Transport Accident
Commission  says  80%  of riders are not club members. Police say just
7000  people  across Australia are members of targeted clubs and admit
that  not  all  of  them have criminal records. It is obvious that the
vast  majority  of  riders  are law-abiding citizens who more than pay
their way in society.

A  law  removing  the  right  to  free  association  will destroy many
community  service  activities.  Propaganda says TOY RUNS, Pink Ribbon
Rides  and  like  events,  are  spin to distract public attention from
violent,  criminal  behaviour.  That  is  more  than  a  lie  and it's
insulting.  I've  been  an  organiser  for major bike events since the
1970s  and  I've  never  seen criminal involvement in any of them just
hard working volunteers.

We  urge Members of Parliament to throw the anti-bikie law out because
it  won't  achieve  it's  aims and it removes rights that go to making
Australia  the great free country it is. Blitz serious crime by giving
police  the  resources  they  need  to  enforce  existing  laws not by
introducing this unjust law. 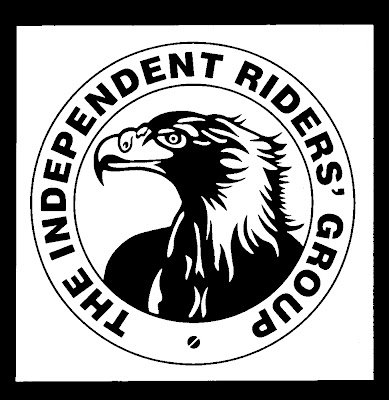 To join the Independent Riders' Group all you have to do is email me your name, post code and email address and I'll sign you up. It's free and you can withdraw at any time. Membership in the IRG does not interfere with membership in other organisations. The IRG reserves the right to refuse a membership without explanation.

Posted by Damien Codognotto OAM at 15:33