CRASH SITE DATA in Victoria is unreliable and the further from the city the crash is, the less reliable the data is.

This fatal crash wasn't far from Melbourne. It was in central Victoria. Black top all the way and plenty of places for a chopper to put down but it took some 4 hours for trained specialists to get to the crash site.

The Parliamentary Inquiry into Crashes Involving Roadside Objects (2005) reported a number of areas where crash data was missing or could be more detailed.

Isn't it time police got on with policing and left road crashes to an independent road safety & traffic authority with an agenda for road safety only? 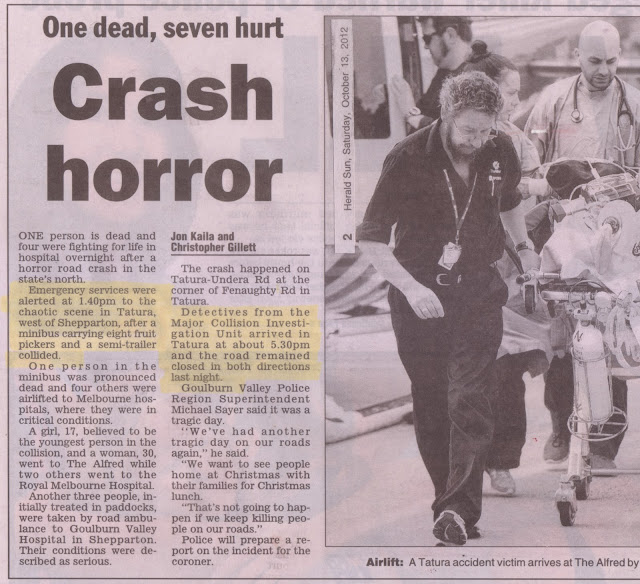 One  dead,  four  fighting  for  life  after another smash in regional
Victoria,  this one at Tatura. Eight farm workers in a minibus collide
with a truck (Oct. 13, 2012).

Crashes like this are far too common. A contributory factor in many is
road condition. Small cars, motorcycle & scooter riders and bicyclists
are most a risk from potholes and road debris.

In coming weeks tens of thousands of motorcycling tourists from across
Australia  and  around  the world will ride Victoria's neglected roads
travelling to and from the Moto GP on Phillip Island.

Neglect  by  road  authorities,  more  interested  in big projects and
corporate  image  than in road repairs and maintenance, contributes to
the  road  toll.  This puts residents at risk and damages our tourist
industry.

It  took  around  four hours for a trained crash investigation team to
reach  Tatura.  If  it had been a serious injury incident an untrained, local
officer  would probably have  filled in a form. The further a fatal
smash  is  from Melbourne,  the less reliable the data is.

TAC officials  told  the  current  motorcycle safety inquiry that data was
"cleansed"  at  VicRoads  (TAC  quote.  August  31,  2012).  Then it's
presented as fact. They readily admitted that data on the exact location of a crash
was not collected so roadside objects like wire rope barriers were virtually impossible
to identify in police reports and that hospital data on the type and severity of injuries
could not be linked to specific crashes.

Crash  site  data  does  not  expose the size of the pothole problem. Victoria
really  is  the  pothole state and our potholes are adding to the road toll.


Posted by Damien Codognotto OAM at 15:41